Thailand's Red-Shirt movement expects a half-million government supporters to take to the streets on Jan. 13, the day anti-government forces have pledged to "shut down" Bangkok, and says it can marshal 10 times that number to protest if needed.

The Red Shirts stand ready to "fight," and are organizing a meeting of 4,000 to 5,000 core leaders on Jan. 7 to plan future steps, Tida Tawornseth, one of the movement's top leaders, told the Globe and Mail in an interview Saturday.

The plans for mass demonstrations are being made as Ms. Tida estimates a "more than 50 per cent" chance of a coup amid the latest political crisis to sweep Thailand, Ms. Tida is chairwoman of the United Front of Democracy Against Dictatorship, the leading red-shirt organization. She warned that bloody reprisals are possible if voters aren't given a chance to elect a legitimate new government.

"We don't want to use violence. We try to keep this policy, because I think we still have ways to fight with a peaceful movement," she said, speaking in a small red-painted office at the UDD headquarters on the fifth floor of a shopping mall on the outskirts of Bangkok. "But in the future, I don't know."

In red-shirt stronghold regions, talk of a looming "civil war" has become uncomfortably common. It is the product of frustrations over a new round of political turmoil mixed with fears of a worst-case outcome to a seemingly-intractable political tussle that has led to the serial downfall of elected governments over the past decade, often through army intervention, which in 2010 fired on redshirt protesters in clashes that killed 87. It is "too much for Thailand," Ms. Tida said. "People are dying in the streets because of the military. So many deaths."

Asked about the possibility of violence, Ms. Tida said she is "not ruling it out." In the past, Thais have responded peacefully to coups because "they didn't want to have violent action. But I think right now everything has changed."

Red Shirts draw their support from Thailand's agrarian north and north-east, the power base for Ms. Yingluck, who along with predecessor governments has introduced a series of policies especially popular with lower-income brackets, including cheap health care, a guaranteed minimum price for rice and a higher minimum wage. On Saturday, Ms. Yingluck's Pheu Thai party officially kicked off a campaign for a Feb. 2 election, one that seems mathematically incapable of delivering a new government. Too few electoral districts have registered candidates to reach the quorum of MPs needed for the House of Representatives to be seated.

That is thanks to efforts to block the election by the anti-government yellowshirts, or "multi-colour," as some say the diverse movement should be called. They have rallied huge numbers of people in recurring protests aimed at unseating the Yingluck government. Ms. Yingluck has been reduced to caretaker status after she dissolved parliament Dec. 9, following an outcry to a hastily-passed amnesty bill that would have allowed her brother, exiled billionaire Thaksin Shinawatra, to return to Thailand. The protestors call themselves a "people's movement" intent on removing the influence of Mr. Thaksin, who they accuse of buying control of the country through massive cash-for-vote schemes.

"We are determined to fight and we will let the world know that this is a tyrant government," said Satish Sehgal, one of the 34-member anti-government leadership committee. They call for Ms. Yingluck to be replaced by a 400-strong People's Council that would spend a year or more drafting new laws to clean up elections that would then follow.

As the two sides battle for legitimacy, numbers on the street matter, and Mr. Satish believes his will prevail.

"From the 13th onwards, I think we will be able to mobilize six-million people to come out on the streets," he said.

Those arrayed against the government are also skeptical of claims the Red Shirts can muster large forces. They believe support for Ms. Yingluck is weakening, even in her strongest constituencies. Asked if the Red Shirts can get out five-million people, Prasit Boonchey, chairman of the Thai Farmers Association, said: "I doubt it."

Some farmers who came to the most recent big Red Shirt rally in November weren't paid what they were promised for attending, he said. Others have lost faith in the government's policies. The revenue boon created by the high guaranteed rice price, for example, has been offset by rises in field rent, fertilizer prices and the minimum wage. "After deducting all of those expenses, we believe we are getting less than under the previous government," Mr. Prasit said.

Ms. Tida, however, said the red-shirt strength is drawn from a simple premise: government opponents want to suspend an election, and are thereby acting against the most basis premise of democracy.

"They say we cannot have one man one vote in Thailand. I don't need to say anything more," she said. "They cannot trust the people. They think government should come from heaven."

She denied that Red Shirts were defecting – "because to be a Red Shirt is the right thing; we only want democracy, and just one word: equality" – and reiterated her support for the current government, which even some redshirts believe might be better with new leadership. Asked if she thought Mr. Thaksin's influence should purged, she said no.

"We fight for the system and for democracy. We don't care about the person," she said. "It's crazy that all of the aristocrat groups are afraid of Thaksin. Very crazy.

Ms. Tida offered her support to Ms. Yingluck, as well.

"I want to cheer her as a woman," she said. "I told her, 'you cannot resign, because the power that you have right now comes from the people. It's not your own.'" 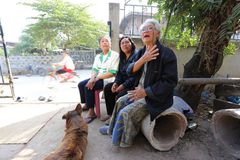