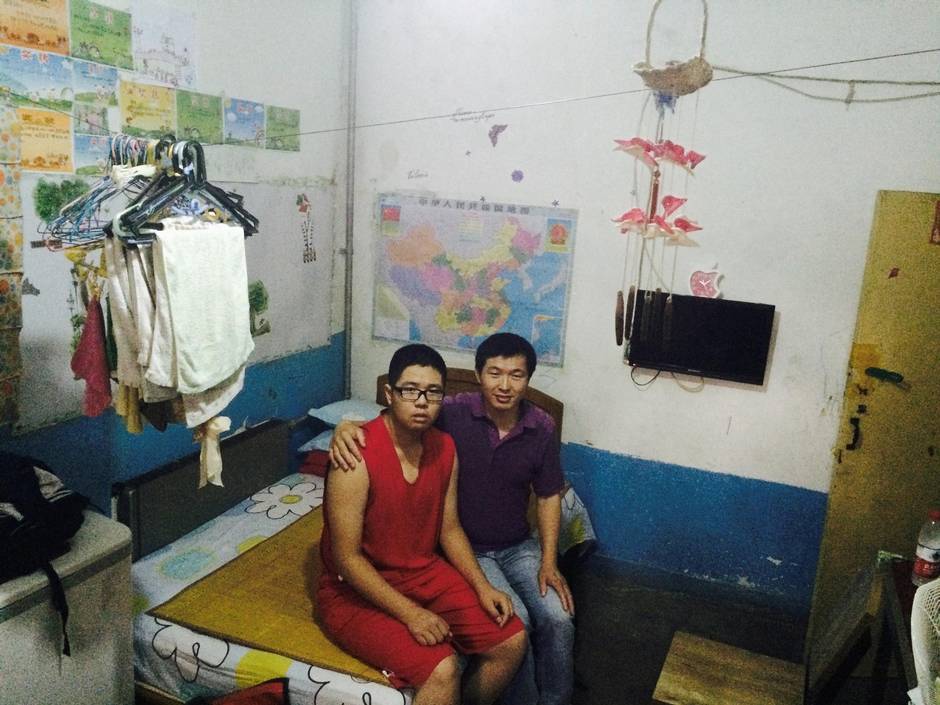 Xie Junwen and his father Guoliang Xie in their "underground" home in Beijing. (Doug Saunders/The Globe and Mail)
The ‘ant tribe’ of China
The sub-sub-sub-basement dwellers of Beijing are highly skilled and educated – middle-class parents driven underground, both literally and otherwise, to secure a better future for their kids. Doug Saunders reports

When 16-year-old Xie Junwen comes home from school, he steps off the bus in an industrial corner of southern Beijing, walks through the dilapidated courtyard of an apartment building, steps around the entrance, into a murky-smelling corner, and makes his way through a narrow alley that leads to an unlit service staircase. He follows this staircase down, and down, and down.

There, four metres below the surface, is a warren of small rooms joined by a labyrinth of hallways. I step into Junwen’s. It’s the size of a typical 16-year-old’s bedroom in the West: nine by 16 feet. Bare fluorescent bulbs augment a dim light trickling from a manhole-covered trough high above the top of the room’s outside wall.

But this is not, in fact, Junwen’s bedroom. It is his family’s entire home: He shares the airless space, that houses two beds and a desk, with his mother, father and six-year-old brother. They share a tiny kitchen and a rudimentary bathroom with three other families, 12 people in total, who live in similar murky rooms.

“We arrange our schedules so there won’t be other people in the kitchen,” Junwen explains. “It means eating very late and getting up before dawn to wash.”

The Xie family know very well how inhuman this is – and how much worse it gets. “One of the shortcomings here is that it is always damp,” says Guoliang Xie, Junwen’s father. “It affects our health. But we’re better off than when we were a floor below this, in a second-floor basement – there, all the walls were wet, all the time.”

The Xies are part of a subterranean community known in Beijing as the “ant tribe” (and sometimes as the “rat tribe”) – an estimated 100,000 people living in below-grade, far-from-legal basement apartments beneath the courtyards and shopping streets of China’s capital, where rents for even poor-quality normal apartments have risen as high as those in big Western cities.

For a number of years, the ant tribe has been something of a Beijing obsession, the subject of municipal crackdowns and media campaigns that have done nothing to quell their numbers. In the eyes of authorities, the tribe is an illegal and alien population, “migrant labourers” who should not be living in Beijing in the first place.

The truth about the ant tribe is more sobering, and less squalid, and says a lot about what has caused the Chinese economy to go off the rails this year. The “ants” are not indigent beggars or lost souls (who could not afford even sub-basement rent) or low-wage workers (who generally live in workers’ dormitories, 10 to 12 of them to a room, but above ground).

Rather, they are ambitious citizens who have been driven underground, literally and figuratively, in their quest for middle-class stability. Their mildewed lives are the material embodiment of something being endured by countless millions of Chinese today, as they attempt to balance President Xi Jinping’s ambition of creating a middle-class China with his party’s desire to control and regulate their lives. As Mr. Xi attempts to dig the stock market and the country’s currency out of a hole created by those clashing ambitions, nothing is being done about the many people who those policies have thrust into an even more tangible hole.

The true nature of the ant tribe becomes apparent soon after you step into the Xie family’s room. Their smartphones and tablets, you notice, are Apple devices. They have a lot of books, on sophisticated topics. The computer screen is logged into a university site.

Mr. Xie is very far from being a migrant labourer. He is a highly trained chef, and he runs the kitchen at a chic vegetarian restaurant in a nice part of northern Beijing. His job, which comes with a pension and weeks of paid vacation, pays 10,000 yuan (or more than $2,000) per month, a respectable lower-middle-class salary in urban China.

His wife (who would rather her name not be used) has a university degree and works as a teacher at a good private school. She is paid only $600 a month, but that gives the family free tuition there for Junwen’s younger brother – which would otherwise have cost $600 a month.

In other words, the Xie family isn’t poor at all; they have the salaries, possessions, interests and educations of people comfortably in the middle class. And the ant tribe is overwhelmingly made up of people like them: University-educated or highly skilled, well-paid, ambitious. Given those incomes, they should easily be able to live in a nice apartment above ground.

But they can’t, for one very good reason: They, and most of the other 100,000 “ants,” are not legally citizens of Beijing.

We arrange our schedules so there won’t be other people in the kitchen. It means eating very late and getting up before dawn to wash.
16-year-old Xie Junwen

Calling the Xie family “migrants” is as absurd as calling them “labourers.” Mr. and Mrs. Xie moved here from Hunan province, to the south, in 1995 and 1998, respectively, after finishing university. They’ve built their careers in Beijing, and both their children were born here. But because they have a non-Beijing household-registration permit – a document known as a hukou that traditionally stays with you for life, is registered in your place of birth, and applies to your offspring, wherever they’re born – they are not allowed to have access to any of Beijing’s public services, including education.

As a result, they – and millions of other people born outside of China’s major cities – are being excluded from the great Chinese middle-class experiment, at enormous cost to the economy.

After the 2008 financial crisis caused Western imports of Chinese goods to plummet, Beijing’s Communist Party authorities embarked on a major, high-profile endeavour to turn China from a nation of low-wage factory workers dependent on foreign export earnings into a nation of middle-class consumers who would boost domestic demand and create a self-sufficient, prosperous Chinese economy.

But this year has seen much of this stall: Despite having many of the instruments and institutions of a middle-class economy, China still has tight government restrictions on the movement of many things. The stock market and the banks do not move freely; this month has seen Beijing attempt to boost both, by heavily capitalizing flagging markets and banks. China’s currency does not move freely; it is exchanged within state-controlled bands; Beijing last week crash-devalued it in an attempt to restore growth.

And, equally important, people do not move freely. There are as many as 200 million Chinese who live somewhere without legal hukou, and so can’t invest in housing, put their kids through school or get medical care: The pathway to the middle class is barred to them. A major 2012 government initiative to reform the hukou system applied only to smaller cities – the three biggest population centres (Guangzhou, Shanghai and Beijing) have actually tightened their restrictions in recent months.

“This is keeping so many families from progressing beyond low incomes because they can’t put their kids in school or university,” says Duo Guowang, a hukou-reform activist in Beijing. He moved from the province of Inner Mongolia to Beijing in the nineties, got a residence permit, and then discovered that his “migrant” son (who had lived in Beijing from infancy) could not legally go to university.

He lists the human and economic consequences of this lack of free trade in humans: “This policy is separating children from their parents, it’s causing hundreds of thousands of children to drop out of school at a very young age, and it’s keeping millions of people from spending money in the economy because they have to spend all their money on education.”

That’s certainly the case in this ant-tribe apartment.

Like most Chinese parents, the Xies have big educational ambitions for their children: they want them to have professional degrees, and jobs that will give them Beijing registrations. But, as “migrants,” they had two options: They could force their children to attend primary and secondary school back in Hunan, a place they’ve never known, joining more than a hundred million children who live with their grandparents and see their parents only once a year; or they can pay Beijing primary schools steep “social security” fees (essentially bribes to let those with non-Beijing hukou attend), typically of $200 a month. The latter is what they’ve done.

And to get Junwen a high-school education that will get him into university (and that would be free for Beijingers), they’ve taken an even more drastic step: paying private-school tuition and residence fees almost which are as high as his father’s entire salary.

“We’re not satisfied with these living conditions,” says Mr. Xie. “But it’s a burden we have to endure, because this is a period in our lives when we need to make some sacrifices. I just want my son to have a normal life – we weren’t able to have one, because you’re not allowed to move to a different city.” They’re gambling that their sons will get elite professional jobs which allow them to earn a Beijing hukou.

That’s why they’re living in a sub-basement: Virtually every penny of their earnings is going into getting their children an education that would be free if they’d been born in Beijing. This is true of almost every family you meet in the ant-tribe warrens beneath the streets: out-of-town hukou, university education, huge sacrifice.

The Xie family, and their neighbours, should be exactly the sort of people Xi Jinping wants to turn into middle-class consumers. But they are victims of the strange hybrid of freedom and state control that has sent investors fleeing from the stock market. Unlike the hundreds of millions of peasants who became workers (like their parents), the Xie family are well aware of the forces and restrictions at work on them.

“Now we are afraid to consume or spend money,” says Mr. Xie. “All we can invest in is our children’s education. We really don’t buy ourselves anything else. I want our son to get a decent job. Then, maybe in 10 years, we would like to live above ground. But as long as we’re not allowed to be citizens of this city, we’ll have to stay in the basement.”


Doug Saunders is The Globe and Mail’s international affairs columnist.