When the air-quality index in China hits 50, doctors start to worry about health. At 100, the horizon grows indistinct. At 200, the air takes on a rusty tinge. At 300, it gets harder to see a baseball from the outfield. By 400, colour begins to smear away. By 500, buildings begin to vanish, highways close, flights divert and city buses get lost on their own routes.

China declares anything higher “beyond index.” But smog pays no heed to the Communist Party and as the number continues to creep up, the world gets smaller, darker and heavier.

Canadians know exactly how this feels: It is a blizzard for the postindustrial age, in which winter’s fury is replaced with the wrath of 10,000 smokestacks and, in Beijing, five million cars.

On Tuesday, Beijing will have its inaugural smog snow day, with a first-ever red alert for air quality that will ban half the cars from roads, keep children out of school and halt work at factories and construction sites. 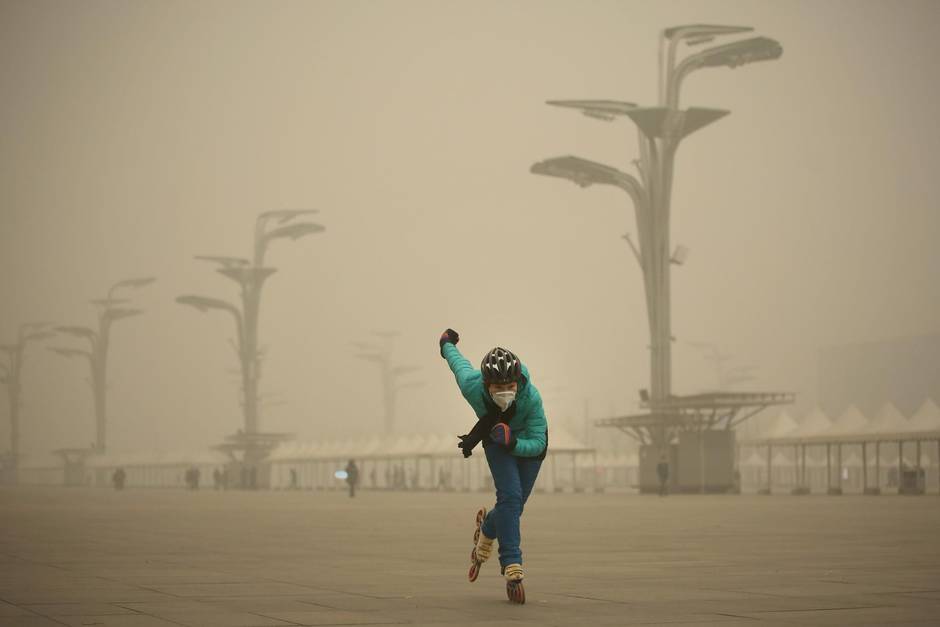 Growing up in Ontario’s Bruce County, I remember listening to the radio, hoping my school’s name would be on the list of those cancelled when the snow fell. In Beijing, when the pollution gets thick, I watch e-mail. On Monday night, word came at 10:50 p.m.: “All schools in Chaoyang” – the district where my children attend school – “have been instructed to close.”

Last week, the air inside their classroom hit 190. In regular times, 200 is the threshold for halting outdoor activities.

But our family is fortunate. Our apartment here is shelter from the storm, with expensive filters that strip out most of the pollutants. They roar loud enough that we can barely hear the television. But they keep the fetor of badly burned coal outside our door.

Most of Beijing, though, lives in the smog equivalent of a tent, unprotected from the elements. When the air goes bad, there is little difference between inside and outside. In glittering shopping malls, milky air smudges the storefronts of luxury brands. There is no escape. But even on the worst days, most dancing grannies – seniors who cut loose to music in parks and squares as part of a health trend – don’t wear masks. It is fatalism with a bad pop beat. 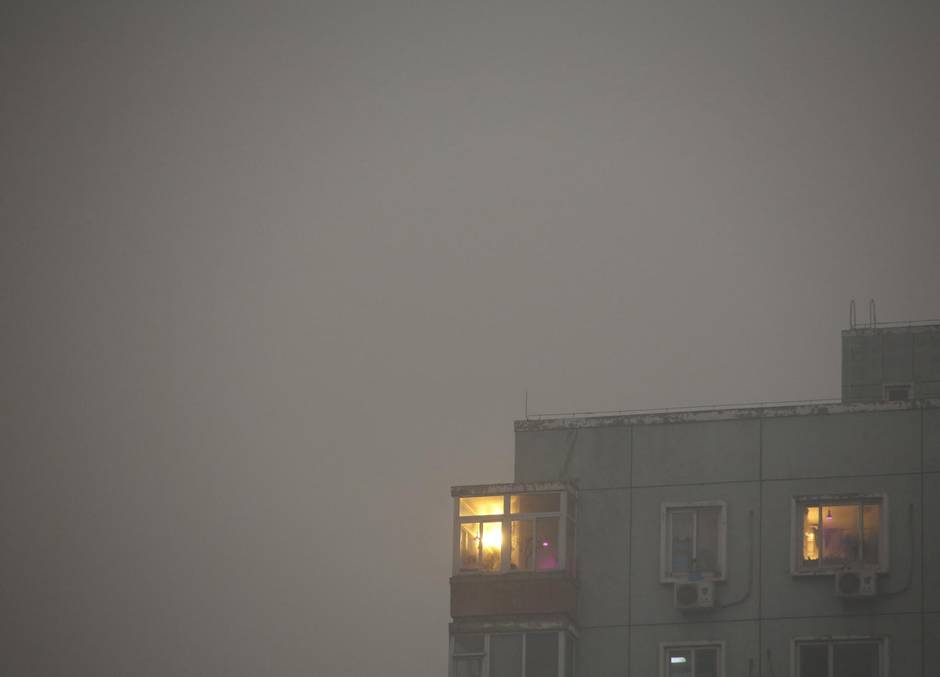 Apartment rooms are lit up during daytime on an extremely polluted day. (Kim Kyung-Hoon/Reuters)

In remarkably short order, air has become one of China’s defining political and cultural features, crystallizing the modern history of a country whose nearly four decades of unrestrained growth built eye-popping skylines now prone to disappear behind the muddy veil of development’s toxic byproducts.

It is, for our family, one of the reasons our walls are covered in doodles, and our children are magnificent swimmers. We spent a lot of time indoors and at the pool, at a gym equipped with air filters.

It has also offered a glimpse of what China can accomplish when it lifts, even slightly, the oppressive yoke on its people. Bad as it has been in recent weeks, the air has been on average notably better over the course of this year, a product of rapid government intervention driven, in part, by public anger that has coursed through media of all forms. Last week, after Xi Jinping travelled to Paris as the first Chinese president to attend climate talks, Beijing Mayor Wang Anshun said authorities are “determined to win the fight against pollution and are subject to the supervision of the citizens and the press.” 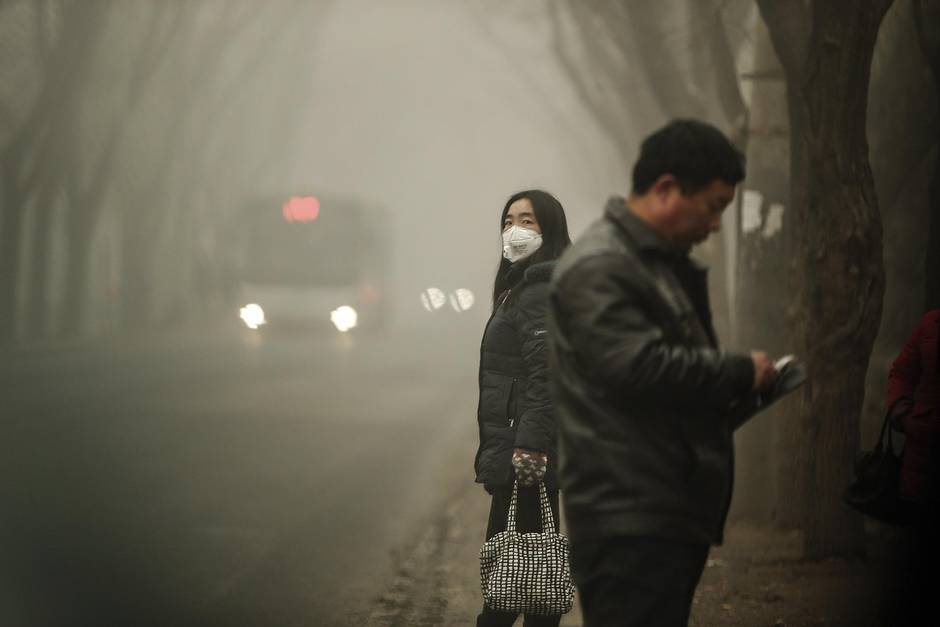 Beijing and many cities in the north recorded the worst smog of the year Monday. (Lintao Zhang/Getty images)

A jaded eye could fairly see that as rhetoric. But smog has been one of the few subjects that has galvanized Chinese society in ways authoritarian Communist leadership has been unable to halt and has, instead, embraced.

The list of recent anti-smog recommendations from local functionaries has included: washing faces and rinsing out mouths; removing coats indoors to lessen contamination; minimizing cooking; and avoiding contact lenses, the latter not because the air is gritty but “because the air pressure is lower. In such conditions, contact lenses can prevent corneas from getting enough oxygen, which can cause discomfort.”

Social media have offered an antidote to the official whitewash, transforming the bitterness of bad air into satire. Among the most-shared images in recent days are ochre-hued streetscapes overlain with marker-drawn outlines of distinctive buildings, such as the CCTV headquarters known as the “boxer shorts.” 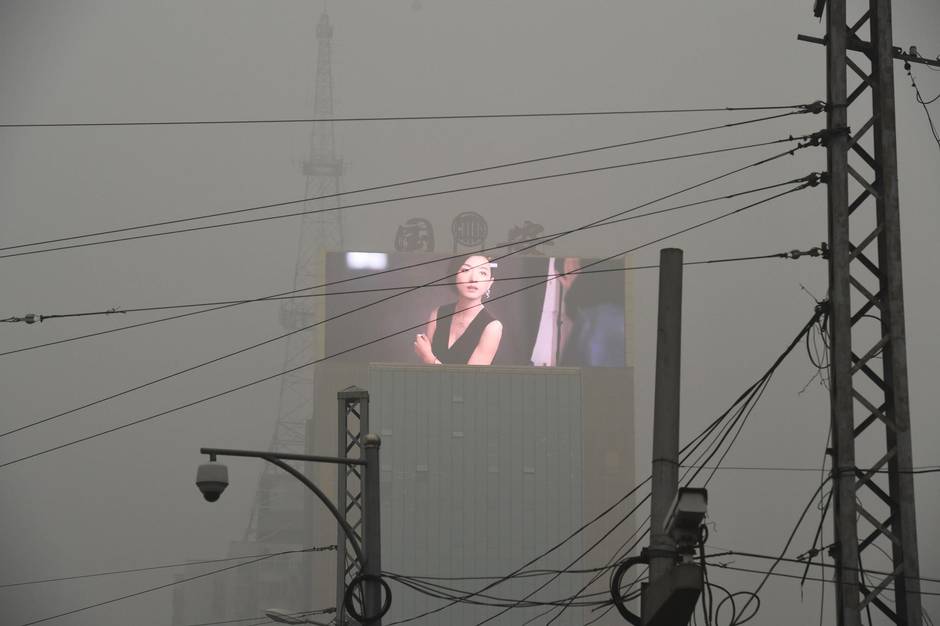 An electronic screen is seen through pollution in Beijing. (Greg Baker/AFP)

But laughter can mask only so much anguish.

I owe some of my lowest moments as a parent to China’s air. In my first year here, my two-year-old twins occasionally looked up at the dim orb in the darkened noon-day sky and shouted, “The moon!”

I was travelling during one severe smog episode, when my wife called in the middle of the night worried about our oldest son, whose laboured and rasping breath I could clearly make out on the phone. I still don’t know if it was smog, a bad cold or perhaps a combination of the two. But every time I see the little green frog inhaler he got that night, I wince with guilt.

Soon after arriving in China to be The Globe and Mail’s Beijing correspondent, I interviewed a researcher who found sustained exposure to bad air had cut lifespans by five years in northern China. I asked about my own children: Would their lungs heal when we leave China? No, he said. Studies seemed to indicate the effects last a lifetime.

Before moving to Beijing, I used to kid that what my children lost in lung capacity, they would make up in earning ability, by being able to speak Mandarin.

The joke no longer seems funny.