The local headquarters of the Muslim Brotherhood and its political wing, the Freedom and Justice Party, are burned-out shells in this Suez Canal port city, the birthplace of the Brotherhood 85 years ago. The remaining Brothers are trying to evade arrest by the authorities; the angry ones are considering a move across the canal to the lawless Sinai and a resort to violence.

There are many who see this as the end of the line for the once mighty Islamist organization. Its popularity with the people is at rock bottom and its leaders locked up, including deposed president Mohammed Morsi.

Other Brothers are hiding out or fleeing the country, and more than 1,000 of its supporters were killed in a brutal crackdown when the army seized power in August. To add further injury, an Egyptian court on Wednesday upheld a ruling banning the Brotherhood and all its branches from operating, and ordering the confiscation of its assets.

There's nothing of value left in the office of the Freedom and Justice Party (FJP) on El Gomhoreya Street in the centre of Ismaila. It's a poor neighbourhood, a block inland from the fishing port and just down the road from the luxurious English homes that run along the corniche.

Next to the old Ibad ar-Rahman mosque, the FJP office sits around the corner from where the Brotherhood's founder, Hassan al-Banna, taught school by day and preached the saving virtues of Islam in coffee houses by night. He set up The Society of Muslim Brothers in 1928 when six Suez Canal workers came to him complaining of the injustices suffered at the hand of the foreign owners.

Ismailia is normally a laid back city. People here tell you that people in Cairo work too hard. There's lots of green space and the waterfront is never far away. There's even a sign – in Arabic – that says "Smile, you're in Ismailia."

These days, there's a tank parked beside the sign and a military checkpoint behind that. Down the road, 10 tanks stand in front of the courthouse.

Posters of Mr. Morsi still can be seen everywhere; most of them, however, have been defaced.

Mustafa Shaltoot, 27, has a tell-tale zebiba (it means raisin) on his forehead – the dark abrasion that comes from touching your forehead to the ground in regular prayer. But like a lot of young followers of the Muslim Brotherhood these days, his formerly thick beard has been shaved to about a three-day growth.

Mr. Shaltoot brought a journalist inside what remained of the FJP office, out of sight from the street. "What happened after the coup was terrifying," he said, referring to the Egyptian army's ousting of Mr. Morsi and the deadly crackdown on his movement that followed. "I'm afraid all the time. I'm afraid the security will see me talking to you," he said.

"But this is our history," he said. "It was this way under [Gamal Abdul] Nasser," referring to the Egyptian president who ordered a crackdown on the Brotherhood in 1952. "We will survive this too."

A few blocks away, at a charity for orphans that was said to have been a branch of the Muslim Brotherhood, Saeed el-Helbawi, 48, denies any membership in the Brotherhood or the FJP. But he does say that his beliefs are consistent with those of Brothers.

Despite the crackdown, "those ideas will continue," he insists. "It's the people running the Brotherhood that are the problem."

Acknowledging that the movement likely will be banned for a long time to come, he said "the Brotherhood is used to operating underground. It's like a volcano boiling below the surface and can bubble up at any time."

Mustafa Shuga, a container-ship captain who was born and lives in Ismailia, expressed the view held by many here. "The Brotherhood wanted an Islamic country," he said. "We are Muslims, we pray, but above all else, we are Egyptian. We don't want this to be an Islamic state.

"We used to respect these people," Capt. Shuga said of the Brotherhood, "but after they came to power, they ruined everything."

Even during the Nasser years, things were not "as bad as this," said Kamal Helbawy, 74, a leading Brotherhood figure who resigned from the movement last year when it decided to field a candidate for president.

"The leadership chose to pursue political power rather than fight for justice for the people," he explained in an interview with The Globe and Mail in his Cairo office at Egypt's Shoura Council, where he is a member of the 50-person committee drafting a new constitution.

"Now, a majority in this country hate the Brotherhood," he said. "This has never happened before.

"The Brotherhood can survive," he added, "but not in its present form. It has to take a 10-year break from politics. It will take that long to recover from the damage these people have done."

Mr. Helbawy continued: "We have to return to the path of Hassan al-Banna. Help the poor, fight for justice, and win back the people's trust.

"Unfortunately, I don't see them following this advice," he said sadly.

He predicted the movement will split into two or three factions, with those unwilling to change weighing down one group and others moving forward with reformed leadership. At least one of the divisions "will follow a violent path," he believes.

"[Egypt's] Muslim Brotherhood never believed in violence," he insisted, even though a member of the Brotherhood assassinated Egypt's prime minister in 1949 and the group was believed to be responsible for several bombings in those days. But several of the groups that have joined with the Brotherhood in opposing the army takeover of power "have polluted the minds of many young men and women" in the organization, he explained. "Some of them prefer to use violence rather than admit the party's mistakes and start again."

"More than faith, the most important pillar in our movement is blood," said one 30-year-old follower, who insisted on anonymity for fear of being arrested. "We will never forget the blood spilled at Rabaa," the man said, referring to the Aug. 14 assault on the Brotherhood sit-in at a mosque in Cairo during which hundreds of protesters were killed, including four of this man's colleagues. "Eight of us went to Rabaa and only four came back," he said.

Already, in Ismailia, a drive-by shooting last month killed five soldiers at a checkpoint, the kind of attack rarely seen west of Sinai. It was followed two weeks later by a car-bombing at military intelligence headquarters in the central waterfront of Ismailia, across the street from the statue of Ismail Pasha, Khedive of Egypt, for whom the city was named.

A large banner now flies above the Khedive's statue, showing the face of the lone soldier slain in that attack.

There is no indication that members of the Muslim Brotherhood carried out either of these assaults – the al-Qaeda-related Ansar Beit Maqdis groups claimed responsibility for both – but "it is only a matter of time," said Mr. Heldawi, before they carry out their own. 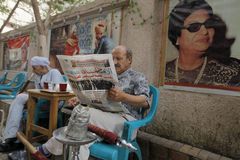 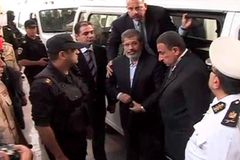 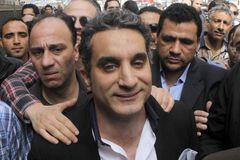 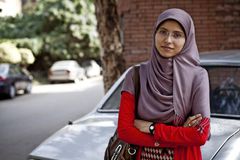