In late November, 1966, authorities arrested Liu Wenzhong and his older brother for questioning the man who had thrown China into chaos.

The two had posted an article lashing out at the Great Proletarian Cultural Revolution that Chairman Mao had imposed on the country only a few months before.

His brother, Liu Wenhui, thought it would bring grave disaster by further entrenching a dictatorship under Mao. He dared to write as much, publicly challenging the Great Helmsman.

For his sins, he was executed by a firing squad. The younger Mr. Liu was imprisoned for 13 years. But what his brother wrote came true.

The Cultural Revolution created a "destruction and contortion of Chinese people's spirit, morality, beliefs and ideas," and Mr. Liu was determined not to forget it. He wrote a book and the sprawling family regularly gathered "on the anniversary of his death to commemorate my brother, and to denounce the Cultural Revolution," Mr. Liu said.

In a country determined to blot out the tumult and violence Mao inspired, such family gatherings were among the few ways to ensure memories of his older brother survived.

But those gatherings have changed in recent years. "It's very hard to get the next generation fully involved," Mr. Liu said.

Children grow bored with hearing "the same old things, and they don't want to remember and listen to bad memories that were buried in the past," he said.

"They are just like most others in society now, forgetting about the past and looking only toward money."

The launch of the Cultural Revolution 50 years ago plunged China into years of disorder and disruption. Children turned against parents, students against teachers and a society against itself. In some places, people labelled "capitalist roaders" were eaten.

To mark its anniversary this week, People's Daily, the Communist Party outlet, released a commentary saying China would never "allow a re-enactment of a mistake like the Cultural Revolution," acknowledging that "the harm it created was comprehensive and severe."

Otherwise, the 50th anniversary of an event whose horrors became one of modern China's defining moments was relegated to the blackness of unremembered history. Newspapers printed virtually nothing. Censors deleted online discussions. Outspoken Chinese faced pressure not to discuss amongst themselves.

Three people contacted by The Globe and Mail for this article declined to talk, citing worries about surveillance. One person postponed an interview by two days, after authorities told him to stay home. Police physically blocked another couple from leaving their home to meet friends for a regular monthly meeting this week. They met The Globe and Mail at a tea house instead, and frequently looked out the window to uniformed police standing outside.

"What the government is doing is disgraceful, trying to silence people," said Zhang Lijia, a Beijing-based author and cultural observer.

"It's such a major event which has shaped China, and they don't allow people to discuss it because they don't want open discussion of anything negative associated with the Chinese Communist Party."

That has cut off most avenues of discussion outside the home.

When Hong Kong-based Phoenix Television sampled attitudes among young Chinese about the Cultural Revolution this week, it discovered a generation that drew its little knowledge from parents and grandparents.

"Mainly through my family. The older members of my family talk about these things," one woman said. "I feel that history textbooks don't really address it enough," said another.

The books that are available, meanwhile, go unopened – even by those with most reason to read them. In, 1988, writer Ma Bo published Blood-Red Sunset, a novel-length account of his experience in the Cultural Revolution. He criticized his own mother, a famous writer, and robbed the family home. She, in turn, wrote a letter disowning him because "you let the party and us down."

Years later, Mr. Ma's account, published under his pen name Lao Gui, still stands as one of the most unflinching accounts of "scar literature." But his own son, who lives in the United States, hasn't read it, even though it has been translated into English. "The Cultural Revolution was very dark and brutal – the darkest period under Party leadership," he said.

His son, however, "feels no interest at all."

In other homes, parents are unwilling to recount their past. In 2014, Dong Jian, a songwriter, went to see Coming Home with his mother. The Cultural Revolution-era film shows a family split apart, and a daughter selling out her father. It echoed some of Mr. Dong's family past, with a mother who lived separated from her husband. When the movie ended, "I asked her what she thought. She sighed and said nothing," Mr. Dong said.

His own curiosity has led him to study what happened – he believes the Cultural Revolution was a force for good, helping to preserve China from splitting up like other Communist states. But his mother won't discuss it.

"My mother's attitude towards my studies is, what use is it? Can it earn you money?" Mr. Dong said.

Harvard professor Roderick MacFarquhar has for many years taught a course on the Cultural Revolution, a subject on which he has written extensively.

Often, his Chinese students "thank me for telling me about the Cultural Revolution, since their parents or grandparents had not told them anything," he said. In part, he says, it's because wealthy Chinese suffered greatly. "Either they beat people up or they were beaten up. I wouldn't want to tell my kids about such events and perhaps Chinese parents feel the same way," he said.

"Which is a pity, since families have to be the repository of knowledge about the Cultural Revolution."

The question of how families discuss traumatic events is well-trodden in science, largely in the context of the Holocaust. Researchers have found that trauma often extends through generations, even when parents refuse to discuss their experiences, leaving their hurt to be expressed, as one academic paper put it, in "veiled references or mysterious outbursts of grief."

"Grievances and emotions are still there. They have not been properly vented or channelled into more productive dialogue or discussions," said Yiching Wu, a University of Toronto researcher currently writing a book on the origins of the Cultural Revolution.

But discussing what happened is difficult because of how the turbulence of the times blurred the lines between neighbour, government and enemy.

Take Ms. Zhang, who at 4 saw her grandfather's stiffened body hanging inside a communal hall near her home. A grain-seller, he killed himself out of fear that he and his family would suffer humiliation.

The sight is her first memory, and growing up she was fortunate to have a mother who spoke about people she know who were killed by knives and factory tools. A friend recounted a story from her own family, who recalled villagers cutting off a landlord's head, and then kicking it like a football. "People met horrible deaths. And she was willing to talk about this. I guess when people suffer, they want people to know about the suffering," Ms. Zhang said.

But, she said, the mere act of remembering is not enough.

"Why did the Cultural Revolution happen? And what does it say about China? My mother never asked these questions," she said.

"Ordinary Chinese people are encouraged just to forget about what happened and look at the positive side, to be grateful for how China has risen in the world." 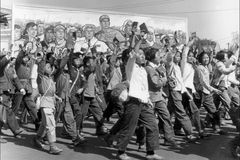 When China ignores its tragic history, it becomes more likely to repeat it
May 23, 2016 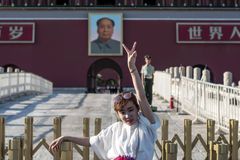