Opposition leaders in Ukraine have rejected an offer from President Viktor Yanukovych that could have ended the popular uprising that has spread across the country. The decision raises questions about the future of Ukraine and fears that Mr. Yanukovych will now use force to stop the protests.

Mr. Yanukovych offered Arseniy Yatsenyuk and Vitali Klitschko the posts of prime minister and deputy prime minister. They both turned down the proposal and remained adamant that Mr. Yanukovych must resign and that the government has to repeal laws that outlaw public demonstrations.

"We're not compromising our position," Mr. Klitschko, a former boxer who leads Ukrainian Democratic Alliance for Reform party, told a packed crowd in Independence Square in Kiev Saturday night. "We are not going to accept this recent offer. We are going to continue negotiations…We will prevail."

Mr. Yatsenyuk, who heads the largest opposition group called the Fatherland Party, told the crowd that their uprising had forced the president's hand. Ukrainian's, he added, "have expressed their will to live freely, to love freely and laugh freely in their own free country. This is our victory, our accomplishment."

He said the opposition will push to get Ukraine into the European Union, something Mr. Yanukovych has walked away from, and it will repeal the constitution to abolish the position of president.

Another leader, Oleh Tiahnybok, urged the crowd to keep up the protests, saying similar demonstrations in other cities are having an effect. "This is the second front. This is the concrete action," he said.

It's not clear how Mr. Yanukovych will respond but protest organizers said more police have been gathering near the square.

Hundreds of protesters have been locked in an uneasy standoff with police for two days. Throughout Friday night and Saturday protesters threw Molotov cocktails, fireworks and rocks at long lines of police officers who were dressed in riot gear and standing only a few metres away. Stacks of tires have also been burning all day along the barricades, causing a smoky haze around much of the city's downtown. Similar protests have now erupted in 11 other cities, with thousands of people taking over the government offices and joining the call for Mr. Yanukovych to resign.

Governors have been particularly targeted because they are appointed by Mr. Yanukovych. In Lviv the locally-elected assembly, which is controlled by opposition parties, met on Saturday to pick a successor to the governor, whom they forced to resign on Friday. The governor has since said he was removed illegally.

Mr. Yanukovych's office said talks began late Saturday with the three main opposition leaders. This is the second time in recent days they have failed to reach a deal. All sides met for five hours on Thursday and reached what they thought was an agreement, calling for the protesters in Kiev to scale back their demonstrations and the police to release those arrested. But the protesters rejected the deal, expanded their barricades and took their cause to other cities.

Earlier on Saturday the government appeared less hopeful of a peaceful solution. "The events in Ukraine's capital during recent days show that our attempts to resolve the conflict in a peaceful way are useless," Interior Minister Vitaliy Zakharchenko said in a statement. "Our calls haven't been heard. Truce has been broken."

Mr. Zakharchenko also accused the protesters of kidnapping three police officers and hiding guns in Independence Square, where the demonstrators have been based for more than two months. The protesters have denied the claims.

European Union Enlargement Commissioner Stefan Fuele also discussed the growing violence with Mr. Yanukovych and opposition leaders on Saturday. "I have discussed a series of steps to this end, that could lead to confidence-building and to a political process aimed at ending this crisis," Mr. Fuele said in a statement. The demonstrations began last November after Mr. Yanakovych walked away from a cooperation deal with the EU, striking a deal with Russia instead.

Earlier on Saturday one of the opposition parties, Svoboda, said that another protester had died from injuries sustained by police. The party said the victim was a 45-year old man who had been injured Wednesday. Government officials have not confirmed the death. So far as many as five protesters have died in recent days and more than 100 have been arrested.

As the negotiations between Mr. Yanakovych and the opposition politicians wore on, the streets around Independence Square filled with thousands of people, many feeling a new sense of purpose. "We will win," said one man standing near the front barricade, wearing hardhat and facemask. He said police had fired some tear gas into the crowd with little effect.

Further away in the square a group of women marched holding signs that read "Mama". "They want to stop the soliders and to persuade them not to be the meat of the establishment," said an organizer of the march. Many of the women carried other signs that said; "Everybody has a mother". 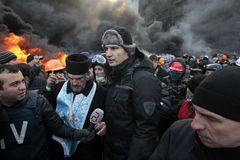