The Globe and Mail's Geoffrey York is Canada's only full-time Africa correspondent. Follow him on Twitter as he reports from Zimbabwe on the latest developments.

While many Zimbabweans are celebrating the military takeover that abruptly ended the 37-year rule of President Robert Mugabe, there are growing fears that Mr. Mugabe will be replaced by a military-dominated regime that remains equally repressive.

Diplomats and opposition parties are scrambling to find a path to democracy from Zimbabwe's military coup. Yet the early signs suggest that the next government will be largely controlled by the same authoritarian politicians and soldiers who have led the once-thriving country into a nightmare of poverty and isolation.

What just happened in Zimbabwe? How a political crisis became a military takeover

Negotiations continued on Thursday between Mr. Mugabe and the military, with mediation led by South African cabinet ministers and a Catholic priest. But despite rumours of a deal that could allow Mr. Mugabe and his family to leave the country, there was no announcement by the end of the day.

On Thursday night, in the first photos of Mr. Mugabe to emerge since the military put him under house arrest, the close connections between the coup leaders and the 93-year-old president were made abundantly clear. The photos showed Mr. Mugabe smiling cheerfully and warmly gripping the hand of the coup leader, General Constantino Chiwenga, the commander of Zimbabwe's armed forces, who was grinning broadly in some of the photos. Despite their recent rupture, they have been comrades for decades.

Mr. Mugabe was wearing a blue blazer and tie, while General Chiwenga was in military fatigues. Photos also showed them in a larger meeting with the South African mediators. The meeting took place in a presidential building known as State House, indicating that the army had allowed Mr. Mugabe to make a temporary exit from his palatial home, where he had been confined by the military on the first day of the coup.

General Chiwenga will be the power behind the throne in Zimbabwe's next government. The military has long accepted the worst of Mr. Mugabe's excesses, providing the muscle to crush his enemies and keep him in power for nearly four decades. Only when Mr. Mugabe seemed on the verge of turning against the army commanders – and promoting a rival faction led by his wife – did General Chiwenga finally take action against him.

The closest political ally of the military is the former vice-president, Emmerson Mnangagwa, who was sacked by Mr. Mugabe last week. Many analysts expect him to be restored to a senior government post in the military-backed government.

While some Western diplomats see him as an economic reformer, Mr. Mnangagwa has a long history of human-rights abuses, dating back to the early 1980s when he led a military crackdown that killed an estimated 20,000 people in the restive Matabeleland region. He also led a military intervention in Zimbabwe's 2008 election in which many civilians were assaulted.

Western and African diplomats were in high gear on Thursday, searching for a way to restore civilian rule. Some were touting a "transitional authority" that could include members of the opposition parties alongside the military and its allies.

"We have to put pure democracy on hold for now," Mr. Biti told The Globe and Mail, explaining how a transitional authority could work.

"Now is the time to negotiate," he said. "A transitional government would provide a sanitation process for the military. They need chlorination."

But even if some opposition leaders are included in the transition, this is likely to be a fig leaf for an army-controlled regime. The military, with its remarkably smooth and nearly bloodless takeover of Harare on Wednesday, showed that it is Zimbabwe's most powerful and organized force.

At least seven politicians and security agency chiefs are in custody in the jail cells at the main headquarters of the Zimbabwean military, according to a source who visited the base on Thursday morning.

The source, a Zimbabwean who spoke on condition of anonymity, said soldiers confirmed to him that the military had made the arrests. Those in custody, he said, are members of a faction allied with Mr. Mugabe's wife, Grace, who has feuded bitterly with Mr. Mnangagwa and the army commander. Among those in custody are four cabinet ministers and the head of the police and the Central Intelligence Organisation, he said.

He quoted the soldiers as telling him: "Everything is under control. It's all going according to our plan."

Senior officials from four countries in the regional bloc, the Southern African Development Community, met on Thursday in Botswana and expressed "great concern" over the Zimbabwe situation.

They repeated the bloc's traditional concern about the "unconstitutional removal of democratically elected governments." But they called for no specific action, except the convening of an urgent summit of the Southern African group.

Opinion
Coup or not, there’s much at stake in Zimbabwe 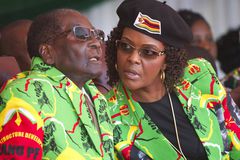 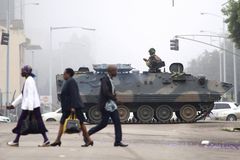