Patrick Martin is a contributor to the Globe's new World Insider, which provides a daily analysis of world issues and global trends for Globe Unlimited subscribers.

Few terms are as loaded as that of "terrorism," the practice of which is widely condemned, and its perpetrators the targets of full-scale campaigns. But what makes an act of violence an act of terrorism?

When two men used their car to run down Lee Rigby, then brutally attacked and nearly decapitated him with a meat cleaver, did they commit an act of terror warranting the full wrath of the British state? Or was it mere horror, requiring a simpler police investigation?

To be safe, the government called a meeting of Cobra, Britain's emergency council, at which the Home Secretary, Defence Secretary, Communities Secretary, Metropolitan Police Commissioner and heads of intelligence agencies were present, while the Prime Minister cut short a working trip to France.

Did the brutality make this terrorism? Not on its own. England has had axe murderers in the past and they were your run-of-the-mill serial killers.

While there is no universal legal definition for terrorism, there are three aspects necessary for a violent assault to be called terrorism.

1. an attack on innocent people – civilians or non-combatants;

2. intended to strike fear in the population at large;

3. have a political or ideological purpose.

In London's hacking attack, the victim was a soldier. However, he was off duty, unarmed and in his native country, not in Iraq or Afghanistan. By almost any measure, he was an innocent. To that extent this was terrorism.

Striking serious fear is the hallmark of a terrorist attack – extreme violence is not sufficient; the event must make reasonable people fear for their safety. By this definition, the London attack may not amount to terrorism. Reports indicate there were few signs of alarm following the horrific incident.

And the attack must serve a political goal, as opposed to a criminal or personal purpose. That appears to be the case in the London attack. The suspects are said to have called out Islamic slogans in the attack. One of them later said "This British soldier is an eye for an eye, a tooth for a tooth," referring perhaps to the Western-backed fight against Islamist militants in Mali and Nigeria.

To be political, some argue, those carrying out an attack must be members of an organization such as al-Qaeda or Hezbollah. But small unaffiliated groups can certainly carry out terrorist attacks: the brothers who planted bombs at the Boston Marathon; Timothy McVeigh, who levelled a government building in Oklahoma City killing 168 people; even a single man, such as Anders Behring Breivik, who killed 77 people in Norway in 2011, or the Unabomber, Theodore Kaczynski, can be a terrorist.

Mr. Kaczynski's 16 bombings between 1978 and 1995 targeted innocent people and struck genuine fear in the United States, all with the aim of reining in the destructive impact of technology. His inspiration came from Joseph Conrad's 1907 novel The Secret Agent, in which early anarchists sought to blow up the Greenwich observatory, a symbol of scientific advances at that time, though their ulterior motive was to get rival leftists blamed for the attack. It is a terrorism classic.

Mr. Kaczynski kept a copy on his bedside table.

London attack aftermath: In Woolwich, fear, blame and a twinge of hope
May 23, 2013 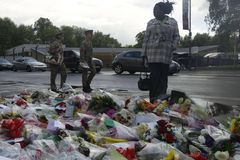