Dozens of men and women at Pulse nightclub were slaughtered by a U.S. citizen who pledged his loyalty to Islamic State. Does that make the Orlando attack a terrorist act? The shooter had recently become angry when he saw two men kissing, according to his father. Does that make the attack a hate crime? Everything is political, and Sunday's attack will be embedded within a presidential election campaign already scarred by racism, nativism and intolerance.

But in that political debate, we need to keep front and centre that this was an attack on homosexuals. For all the advances that the community celebrates during Pride – same-sex marriage in both the United States and Canada, a transgender rights bill promised by the Trudeau government, cities where sexual minorities can live in something approaching full equality – this remains a world where half-a-dozen countries execute homosexuals and another 70-odd send them to prison, sometimes accompanied by whippings and hard labour.

Orlando reminds the LGBT community that the world is a dangerous place, that attitudes change slowly, that the viral hatred spewed by religious and political extremists can infect someone on their own street, putting the entire community at risk. It reminds them that Pulse could just as easily have been their bar.

Even here, there is attitude. As I arrived at The Globe's offices Sunday morning, a person sharing the elevator who had just heard about the attack shook his head and said: "Probably a lover's quarrel."

Inevitably, the Orlando massacre is infecting the narrative of the presidential election. After the attack, Donald Trump tweeted: "Appreciate the congrats for being right on radical Islamic terrorism," and later lashed out at President Barack Obama and Hillary Clinton, saying that if the presumptive Democratic presidential nominee "still cannot say the two words 'Radical Islam,' she should get out of this race."

In response to last December's attacks in San Bernardino, Calif., the presumptive Republican presidential nominee vowed to prohibit Muslims from entering the United States, to complement his policy of expelling illegal Latino immigrants.

But the killer, Omar Mateen, was American-born, of Afghan descent. The shootings are bound to stoke discrimination against American Muslims, who suffer whenever a lone wolf among them lashes out.

Democrats and gay activists will point to Republican opposition to gay marriage, Republican state governments that protect business owners who discriminate against same-sex couples, Republican laws that persecute Americans who identify as transgender, and say that the GOP's homophobia helped create the atmosphere that led to the attack.

Republicans will doubtless respond that the Obama administration's half-hearted attempts to contain Islamic extremism created the vacuum that Islamic State now occupies, whence it spouts its bile against homosexuals and other unbelievers.

To which Democrats might reply that if the Bush administration hadn't attacked Saddam Hussein's Iraq in the first place … and on it goes.

Add in another round of futile calls for a ban on assault rifles, rebutted with something like: "If the kids in that bar had been carrying guns, most of them would still be alive," and you have a classic, toxic, shouting-past-each-other American political debate.

What risks being lost is the fact that the killer targeted a gay bar, where, as Mr. Obama put it "people came together to be with friends, to dance and to sing, and to live." This killer targeted gays just as past killers have been driven by hatred to attack women or racial minorities.

But it's also important to remember the hundreds of people who headed to blood banks to donate. The Food and Drug Administration won't allow men who had sex with men in the past year to give blood, so there must have been a lot of straight Americans who lined up in solidarity, Sunday.

"We will not shrink away, we will not be stuck in our homes," Los Angeles Mayor Eric Garcetti told Pride celebrants, Sunday, despite both the attack in Orlando and reports that a heavily armed man had been intercepted by police on his way to L.A. Pride. "We will not go back into closets. We are are out here to march, to celebrate and to mourn."

Amid the horror, these flecks of grace. 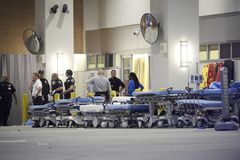 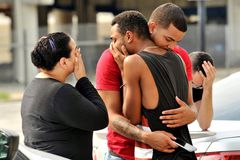 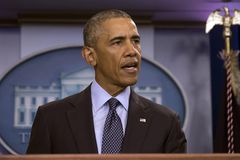 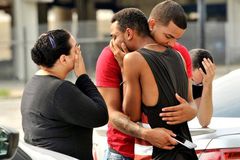