No one knows for sure just how many people Patrick Sawyer came into contact with the day he boarded a flight in Liberia, had a stopover in Ghana, changed planes in Togo, and then arrived in Nigeria, where authorities say he died days later from Ebola, one of the deadliest diseases known to humans.

Now health workers are scrambling to trace those who may have been exposed to Mr. Sawyer across West Africa, including flight attendants and fellow passengers.

Health experts say it is unlikely he could have infected others with the virus that can cause victims to bleed from the eyes, mouth and ears. Still, unsettling questions remain: How could a man whose sister recently died from Ebola manage to board a plane leaving the country? And worse: Could Ebola become the latest disease to be spread by international air travel?

Mr. Sawyer's death on Friday has led to tighter screening of airline passengers in West Africa, where an unprecedented outbreak that emerged in March has killed more than 670 people in Guinea, Sierra Leone and Liberia. But some health authorities expressed little confidence in such precautions.

"The best thing would be if people did not travel when they were sick, but the problem is people won't say when they're sick. They will lie in order to travel, so it is doubtful travel recommendations would have a big impact," said David Heymann, professor of infectious diseases at the London School of Hygiene and Tropical Medicine.

"The important thing is for countries to be prepared when they get patients infected with Ebola, that they are isolated, family members are told what to do and health workers take the right steps."

Still, detecting Ebola in departing passengers might be tricky, since its initial symptoms are similar to many other diseases, including malaria and typhoid fever.

"It will be very difficult now to contain this outbreak because it's spread," Dr. Heymann said. "The chance to stop it quickly was months ago before it crossed borders … But this can still be stopped if there is good hospital infection control, contact tracing and collaboration between countries."

International travel has made the spread of disease via airplanes almost routine. Outbreaks of measles, polio and cholera have been traced back to countries thousands of kilometres away. Even Ebola previously travelled the globe this way: During an outbreak in Ivory Coast in the 1990s, the virus infected a veterinarian who travelled to Switzerland, where the disease was snuffed out upon arrival and she ultimately survived, experts say.

The World Health Organization is now awaiting laboratory confirmation after Nigerian health authorities said Mr. Sawyer tested positive for Ebola, WHO spokesman Gregory Hartl said. The WHO has not recommended any travel restrictions since the outbreak came to light.

"We would have to consider any travel recommendations very carefully, but the best way to stop this outbreak is to put the necessary measures in place at the source of infection," Mr. Hartl said. Closing borders "might help, but it won't be exhaustive or foolproof."

Patients are contagious only once the disease has progressed to the point they show symptoms, according to the WHO. The most vulnerable are health-care workers and relatives who come in much closer contact with the sick. One of Liberia's most high-profile doctors has died of Ebola, a Ugandan doctor working in the country died this month, and two American aid workers at a hospital in the West African country have been infected. Sierra Leone's leading Ebola doctor tested positive for the virus last week.

Still, witnesses say Mr. Sawyer, a 40-year-old Liberian Finance Ministry employee en route to a conference in Nigeria, was vomiting and had diarrhea aboard at least one of his flights with some 50 other passengers aboard. Ebola can be contracted from traces of feces or vomit, experts say.

Mr. Sawyer was immediately quarantined upon arrival in Lagos – a city of 21 million people – and Nigerian authorities say his fellow travellers were advised of Ebola's symptoms and then were allowed to leave. The incubation period can be as long as 21 days, meaning anyone infected may not fall ill for several weeks.

Still, the mere prospect of Ebola in Africa's most populous country has Nigerians on edge.

In Nigeria's capital, Abuja, Alex Akinwale, a 35-year-old entrepreneur, said he is particularly concerned about taking the bus, which is the only affordable way to travel.

"It's actually making me very nervous. If I had my own car, I would be safer," he said. "The doctors are on strike, and that means they are not prepared for it. For now I'm trying to be very careful."

It's an unprecedented public-health scenario: Since 1976, when the virus was first discovered, Ebola outbreaks were limited to remote corners of Congo and Uganda, far from urban centres, and stayed within the borders of a single country. This time, cases first emerged in Guinea, and before long hundreds of others were stricken in Liberia and Sierra Leone.

Those are some of the poorest countries in the world, with few doctors and nurses to treat sick patients let alone determine who is well enough to travel. In Mr. Sawyer's case, it appears nothing was done to question him until he fell sick on his second flight with Asky Airlines. An airline spokesman would not comment on what precautions were being taken in the aftermath of Mr. Sawyer's journey.

Liberian Assistant Health Minister Tolbert Nyenswah told The Associated Press last week that there had been no screening at Liberia's Monrovia airport. That changed quickly over the weekend, when President Ellen Johnson Sirleaf said a new policy on inspecting and testing all outgoing and incoming passengers would be strictly observed. She also announced that some borders were being closed and communities with large numbers of Ebola cases would be quarantined.

International travellers departing from the capitals of Sierra Leone and Guinea are also being checked for signs of fever, airport officials said. Buckets of chlorine are also on hand at Sierra Leone's airport in Freetown for disinfection, authorities said. Liberia, meanwhile, closed most of its border crossings and introduced stringent health measures on Sunday, a day after an American doctor working in Liberia tested positive for Ebola.

Nigerian authorities so far have identified 59 people who came into contact with Mr. Sawyer and have tested 20, said Lagos State Health Commissioner Jide Idris. Among them were officials from ECOWAS, a West African governing body, and airline employees, health workers and the Nigerian ambassador to Liberia, he said. He said there have been no new cases of the disease.

When will it end? An outbreak could not be declared over until two full incubation periods – 42 days – have passed without new cases, said Stephan Monroe, deputy director of the U.S. Centers for Disease Control's National Center for Emerging and Zoonotic Infectious Diseases.

"The concern is that the outbreak can be reseeded, much like a forest fire with sparks from one tree," said Dr. Monroe. "That is clearly what happened in Liberia," he said, noting that the country made it for more than 21 days without cases, but Ebola returned.

"They were reseeded by cases coming across the border, so until we can identify and interrupt every source of transmission, we won't be able to control the outbreak." 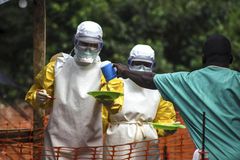 Inside the tent: What a Canadian doctor saw on the frontline of West Africa’s Ebola outbreak
April 22, 2014 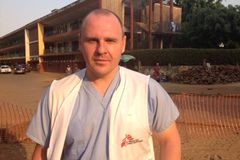 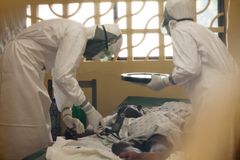 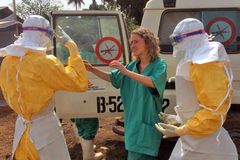