The sight of a helicopter can cause panic in the plush suburbs of northern Athens. Residents know it could be a spy machine, hired by the government to take images of their backyard swimming pools.

Tax collectors make doctors and lawyers squirm by asking how someone who claims to be earning only $20,000 a year can afford such luxuries. Of the 17,000 pools spotted, only 324 had been declared.

No wonder Greece's economy has taken a swan dive. It's generally agreed that 3 to 4 per cent of Greece's GDP is lost to tax evasion, says Yannis Stournaras, director-general of the independent Foundation for Economic & Industrial Research in Athens - roughly $11-billion a year. If those taxes came in, almost half the country's deficit would vanish.

Yet that's a small economic problem compared to the armies of Greek public employees being subsidized by a much smaller private-sector base.

Overall Greece has the least efficient economy in Europe, with its layers of bureaucracy, inflexible unions, protectionism and corruption from top to bottom. "We are a Soviet-style economy," says Mr. Stournaras.

It's only now, a year after a $155-billion bailout from the European Union and the International Monetary Fund rescued Greece from collapse, that Athens is finally accepting that raising revenue and cutting spending is its only route to survival. Yet Greek citizens are resisting austerity measures, blaming them for rising unemployment.

Last Sunday saw 100,000 people protesting, the biggest demonstration since Greece became the first of the euro zone's three bailout cases. While it's generally agreed the government is inept, protesters - often members of unions and the civil service - seem unwilling to ask if they too are part of the problem.

"Greece has been in denial forever," says Jason Manolopoulos, a managing partner of Swiss hedge fund Dromeus Capital and the author of a book called Greece's Odious Debt. "There was no grasp of economic reality."

The tale of the fake lake

The stories of waste in Greece are astounding to the point of comedy. Mr. Manolopoulos writes about Lake Kopais, northwest of Athens. A government agency was set up in the 1950s to drain the lake to make way for a road. The project was finished in 1957. The lake no longer exists, but the agency does. It has 30 employees including a driver, and routinely advertises for new workers.

"No one knows what they do," the head of the government audit office said last year.

But to trace the more fundamental problem, Michael Mitsopoulos, a Greek economist who is the co-author of the book Understanding the Greece Crisis, presents a few simple figures: Out of Greece's 4.3 million workers, about one million are in the public sector, two million work for private companies and 1.3 million are self-employed. The latter typically pay little tax, so the two million private-sector workers have to carry the entire country, including vast numbers of pensioners. What's more, Mr. Mitsopoulos estimates that only about 300,000 of those private-sector employees have both the income and the integrity to pay "substantial" amounts of tax.

Thus, the Greek economy is an inverted pyramid. "You have few people paying on one side and a lot of people taking on the other side," he says. "This is unsustainable. There has to be a master plan to transfer public-sector jobs to the private sector."

The EU, the IMF and the European Central Bank - the "troika" that keeps Greece afloat - are insisting on economic reforms as a condition of their support. A second bailout, worth perhaps $85-billion, is being negotiated to prevent Greece from defaulting on its bond payments, an event that could trigger financial chaos across the continent.

But the bailouts cannot continue forever. They are deeply unpopular in Germany, the biggest sponsor of the rescue. Greece's efficiency drive has to work, and fast. If it fails, the consensus from London to Athens is that Greece is doomed. As Mr. Mitsopoulos puts it, "The end picture would not look much better than Cuba."

Centuries in the making

How did the Greek state become a bloated, corrupt monster, the Jabba the Hutt of the EU's Mediterranean fringe?

The roots of the problem reach back to Greece's Ottoman era, from the 15th century to the beginning of the 19th. As an occupied people, the Greeks naturally resisted paying taxes; indeed it became a patriotic duty. To some degree, that mentality still exists, as it does in other countries, such as Italy, that have spent centuries under unwanted foreign rulers.

After achieving statehood in 1821, Greece was too poor to build a big bureaucracy. Then the country suffered enormously under German occupation in the Second World War, and after the war, Greece was torn apart again by a civil war between communists and right-wing forces (the former lost). Then came a coup d'état and military rule.

In 1974 democracy was restored, and that's when the government hiring spree commenced. Under various populist leaders, government agencies opened their doors wide - too wide, with jobs being traded for votes. By 1980, there were about 500,000 civil servants.

That number has since doubled, with much of the hiring in the go-go years of the last decade, when euro-zone membership gave Greece cheap credit, a stable currency, low inflation and the illusion of wealth.

Stefanos Manos, the finance minister in the early 1990s, recalls that salaries in the public railway company vastly exceeded its revenues. The state would have saved money if it had closed the rail system and given everyone cab chits.

Konstantinos Katsigiannis, an Athens attorney who is president of the Canadian-Hellenic Chamber of Commerce, says the civil service became arrogant and corrosive as it expanded. Starting a company or building a project can be a nightmare because of the endless paperwork, permits and kickbacks. A Canadian diplomat tells the story of a friend who built a resort on an island: It took 10 years and required 6,000 bureaucratic signatures.

Bailouts and their discontents

As spending rose, the government borrowed ever-increasing amounts of money. By 2009, the deficit reached 15.4 per cent of gross domestic product, the highest in the 27-country European Union (Germany's deficit that year was 3 per cent).

While the deficit should come down to 8.9 per cent this year, it is still wildly excessive: The overall national debt is likely to reach 150 per cent of GDP this year, the highest in the EU. Were it not for the bailouts, Greece would be bankrupt, unable to borrow.

Athens has vowed to make the public sector more efficient, but almost no civil servants have left - the constitution guarantees them jobs for life. In any case, with unemployment at a record 16.2 per cent, any civil servants pushed out the door would likely go on the dole, deepening the recession and the potential for civil unrest.

Greece is gambling the a second bailout will buy it enough time (two years, maybe three) to reform. But it's off to a rough start. Tax evaders are proving as clever as the helicopter-borne taxmen - they're buying camouflage covers to make their pools blend into the landscape.

Eric Reguly is The Globe and Mail's Rome-based correspondent.

Greece: When all else fails, tax the pants off everyone
June 9, 2011 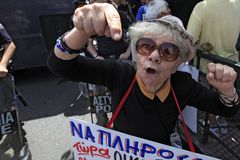 Greek protesters pour out into the streets
Gallery
June 9, 2011 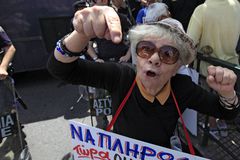 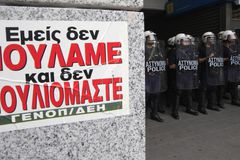 Greece at the brink as politics takes centre stage
June 8, 2011
Restructuring of Greek debt would be like 'death penalty'
May 30, 2011