Olympic star Oscar Pistorius says he heard a noise in his bathroom, grabbed his 9 mm pistol from under his bed, moved down a dark corridor, and fired bullets through a toilet door, accidentally killing his girlfriend inside.

His sworn statement to court, the first detailed account of his version of the killing of Reeva Steenkamp on Valentine's Day, is being challenged by prosecutors who say he deliberately murdered her. But even if his story is truthful, did he respond rationally to South Africa's notoriously high crime rate?

Already some foreign observers are assuming that volleys of gunshots are just a normal part of life in this country, and that Mr. Pistorius reacted like any typical South African to the fear of crime. It's an assumption that's tempting but wrong.

Of course most middle-class South Africans take plenty of precautions against crime. Security alarms, barred windows and doors, high walls, electric fences and motion detectors are all popular. Yet even in the most dangerous cities, gun-wielding paranoia is not nearly as common as outsiders believe.

I've lived in Johannesburg, the most crime-ridden city in South Africa, for the past four years. I have dozens of friends in the city, and some have been victims of home invasions or burglaries, but none keeps a gun under the bed, let alone feels any desire to blast bullets through doors at the slightest sound.

Studies suggest that 12 per cent of South Africans own guns. It's a relatively high percentage by global standards. But it still means that the vast majority of South Africans prefer not to have guns in their houses – mostly for safety reasons, since they realize how often guns can be stolen, misused, or accidentally fired.

On my suburban street, like other Johannesburg neighbourhoods, the piercing wail of security alarms is a near-daily occurrence. If people grabbed guns at every false alarm, the air would be filled with bullets. Most people shrug at the siren, make a quick visual check, and get on with their lives.

The sensational Pistorius saga has obscured the reality of daily life in South Africa, where crime rates are falling, cities are being revitalized, streets are safer than they have been for 20 years, and the number of "no-go" districts is fast declining.

Mr. Pistorius lived in a gated and guarded compound in Pretoria, one of the most secure in the country. Yet most South Africans do not live in giant fortresses. They live in ordinary houses, without the panic or terror that Mr. Pistorius said he felt.

Like most of my friends in Johannesburg, I go for walks in city parks, I visit galleries and theatres in the downtown core, I drive to restaurants at night, and I don't feel any need to carry a weapon. In four years of living here, I've never been mugged, attacked, threatened or robbed.

A South African judge will decide if Mr. Pistorius is guilty of murder (since the country does not have a jury system). But even if the judge rules that the 26-year-old "Blade Runner" is innocent and the shooting was a tragic mistake, it won't be because of a belief that shooting guns at bathroom doors is normal behaviour.

In his statement on Tuesday at his bail hearing, the double-amputee Olympic hero said he was "absolutely mortified" when he realized he had shot his girlfriend. He said he didn't realize she was inside the bathroom until he returned to his bedroom and saw she wasn't there. "It filled me with horror and fear," his statement said.

He said he put on his prosthetic legs, broke down the toilet door with a cricket bat, tried to carry her downstairs, and she died in his arms.

Mr. Pistorius wept often throughout the bail hearing, and cried so uncontrollably as his affidavit was read that the hearing had to be briefly adjourned. He said he was "deeply in love" with Ms. Steenkamp and had no intention to kill her. He said he shot through the bathroom door because he felt "vulnerable," since he wasn't wearing his prosthetic legs and had limited mobility.

The prosecutor, Gerrie Nel, rejected the accidental-shooting argument. He told the court that it was a premeditated murder. There were only two people in the house, and Mr. Pistorius fired four shots through a door at an unarmed woman, instead of checking to find out where she was, Mr. Nel said.

He noted that the toilet room was small, just 1.4 square metres, and Ms. Steenkamp had nowhere to hide when the bullets flew. She was hit by three of the four bullets. "She couldn't go anywhere," he said. "It must have been horrific."

Even if the person in the toilet was a burglar, Mr. Pistorius intended to murder the person, Mr. Nel said. "He prepared. He armed himself. The motive was, he wanted to kill."

The magistrate, Desmond Nair, listened to the arguments by both sides and then ruled that the case should be classified in the most serious crime category – premeditated murder. This will make it difficult for Mr. Pistorius to be granted bail this week, since he will have to prove that "exceptional circumstances" justify his release.

Outside the court building, a demonstration by a group of women – including South African Women's Minister Lulu Xingwana and the women's league of the ruling African National Congress – called on the magistrate to deny bail to Mr. Pistorius to signal greater seriousness on cases of violence against women.

Pistorius affidavit: 'I knew I had to protect Reeva and myself'
February 19, 2013 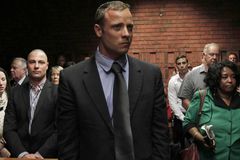 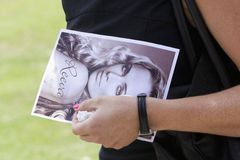 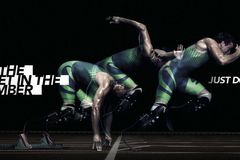 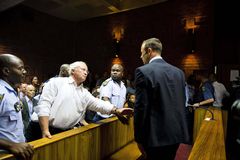 Analysis
Dowbiggin: Sponsors still in Pistorius’ corner are doubling down on their initial mistake
February 19, 2013 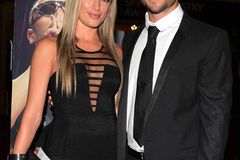 A nation fed up with ‘femicide’ shuns Pistorius
February 17, 2013 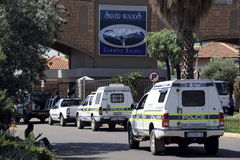