Western governments need to do more to save Ukraine from a Russian effort to turn this country into a "failed state," Prime Minister Arseniy Yatsenyuk said in an interview, saying his country needs military help to halt the advance of Moscow-backed separatists.

"The West needs to make its decision. This is one of the most important decisions in this century: to support or to abandon Ukraine," Mr. Yatsenyuk told The Globe and Mail on the first anniversary of the revolution that overthrew the Kremlin-supported government of Viktor Yanukovych. "If I say to support, it means a large-scale and comprehensive Marshall Plan. A part of which has to be a defence issue … call it defensive weapons supply."

"This is not just a fight for Ukraine, this is a fight for the free world, and everybody needs to realize this."

In an interview marked by moments of high rhetoric and blunt honesty, Mr. Yatsenyuk also called on the United States and Canada to play more active diplomatic roles – a remark that could be interpreted as a swipe at the efforts of German Chancellor Angela Merkel and French President François Hollande. The two European leaders mediated talks earlier this month between Mr. Putin and Ukrainian President Petro Poroshenko that resulted in the signing of a ceasefire that disintegrated almost as soon as the leaders left the negotiating room.

Mr. Yatsenyuk criticized the ceasefire pact reached in the Belarusian capital of Minsk because it "legitimized a new border" between Ukraine and the rebel-controlled regions of Donetsk and Lugansk, while at the same time leaving Russia's border with Ukraine unsupervised until the end of 2015. The deal also requires the Kiev government to pay for the restoration of services in Donetsk and Lugansk, a step Mr. Yatsenyuk said would "severely effect" an already ailing Ukrainian economy.

"Putin's idea is to have Ukraine as a failed state or, I would rephrase, not to have Ukraine as a state at all," Mr. Yatsenyuk said on Friday as Ukraine accused Russia of sending yet more tanks and troops across the border into eastern Ukraine. "I do not trust that Putin will stop."

Mr. Yatsenyuk – a 40-year-old economist who emerged as one of the main leaders of last year's revolution, though initially only as a stand-in for the jailed Yulia Tymoshenko – has been criticized by some Ukrainians for undermining Mr. Poroshenko's efforts to make peace with his hardline stance toward a conflict few believe Ukraine can win militarily. He and Mr. Poroshenko were allies during the revolt, but are increasingly now seen as rivals. Mr. Poroshenko reportedly tried to replace Mr. Yatsenyuk as Prime Minister following parliamentary elections last fall but had to back down when Mr. Yatsenyuk's People's Front party won the largest share of the popular vote.

Despite his criticisms of the Minsk deal, Mr. Yatsenyuk said his government would press ahead with was the construction of what he has dubbed the "European Rampart" – ditch and sand berm wall along Ukraine's eastern frontier with Russia. The wall, he said, would be connected to fortifications along the front line in Donetsk and Lugansk in order to prevent infiltration by "terrorists."

He denied the government was creating a de facto border in doing so. "Territorial integrity matters for every Ukrainian," he said, though he added it would "take years" to regain full control over Donetsk and Lugansk, as well as the Crimean Peninsula which Russia annexed last March following a controversial referendum there.

Speaking two days after the Russian-backed rebels captured the strategic transportation hub of Debaltseve, Mr. Yatsenyuk said that even if the Minsk ceasefire now came into effect, he expected Moscow to switch tactics and attempt to "trigger unrest, instability" in other parts of Ukraine using political and economic tools. "He will change his tactics. He is a good tactical player. We are not to underestimate him."

The Prime Minister's office warned before the interview that he would not comment on the defeat of Ukrainian forces at Debaltseve this week – a haphazard retreat by Ukrainian troops that has generated heated criticism – because it is Mr. Poroshenko who is commander-in-chief.

The Ukrainian government has slowly raised the number of its soldiers killed during the withdrawal from six, then to 13 and then to 22, while acknowledging Thursday that another 172 of its troops are either missing or captured by rebel forces. Separatist leaders say the real number of Ukrainian fighters killed in the three-week siege of Debaltseve is more than 3,000.

"I'm sure there will be consequences for Debaltseve," said Taras Berezovets, a Kiev-based political analyst. "If it turns out there were a lot of casualties, it will be a huge scandal and [the government's] popularity will sink."

At least 5,600 people have been killed over 10 months of fighting in southeastern Ukraine.

Mr. Yatsenyuk, who is somewhere between a partner and a political rival of Mr. Poroshenko, said the next round of political negotiations over the war in eastern Ukraine needs to involve more players.

"I'm not happy – neither with [the deal reached in] Minsk, nor the format of talks. I always reiterate that the Americans have to be on board. The U.S., as one of our closest allies – with the support of Canada, [Britain] and other G7 member states – has to play a crucial and important role in these talks. It will make it easier for Germany, France and Ukraine to hammer out the right deal," he said.

Wider talks seem unlikely, however. Russia has indicated that it sees the United States and Canada as outsiders with no constructive role to play in resolving a European crisis.

Mr. Yatsenyuk backed Mr. Poroshenko's call this week for United Nations peacekeepers to be deployed in eastern Ukraine – an idea that Russia, which has veto power at the United Nations Security Council, has already rejected – but said the West should also begin arming Ukraine's underequipped army for more fighting.

Ukraine and the North Atlantic Treaty Organization say that thousands of Russian troops, backed by hundreds of modern tanks and artillery systems, are aiding the separatists, who last year declared their opposition to the revolution in Kiev and announced independent "people's republics" in the southeastern regions of Donetsk and Lugansk. Russia has consistently denied the allegation.

Mr. Yatsenyuk singled out Prime Minister Stephen Harper's government for praise for the aid given by Ottawa to Kiev so far, but said more and deadlier help was needed.

"Do we need support in enhancing and increasing Ukrainian military capability? Yes. There are a number of voices who say 'look, this could escalate the crisis and this could be an excuse for Russia's further intervention.' I do remember similar talk when Russia annexed Crimea. They said 'probably they will be happy with Crimea and they won't move further.' Well, the world miscalculated," he said. "In the last decade, Russia spent billions of dollars to modernize its military… While the free world tried to reset relations with Russia, Russia reloaded its military."

So far, Canada and other NATO allies have provided only non-lethal aid such as night-vision goggles and winter uniforms to the Ukrainian military. Ms. Merkel, among others, has warned that any Western effort to send weapons to Ukraine would only cause Russia to intensify its own involvement in the country.

Canada, the United States and the EU have also applied escalating economic sanctions against Moscow as punishment for its actions in Ukraine.

Sitting in a green-walled antechamber to his office in the Cabinet of Ministers building, Mr. Yatsenyuk said the good news for Ukraine came in the form of a $40-billion bailout package that the International Monetary Fund announced this week.

Mr. Yatsenyuk said the infusion of cash would create "huge chances to restore confidence into the Ukrainian economy." He also vowed to continue and expand a crackdown inside the country's bureaucracy, which remains largely unchanged from Mr. Yanukovych's time in power.

Thousands gathered on Kiev's central Independence Square Friday to mark the anniversary of last year's revolution, lighting candles and holding Ukrainian flags in an affair that – because of the war in the southeast – was more sombre than celebratory. 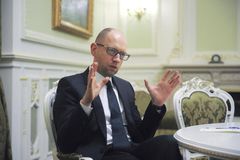