Ukrainian President Petro Poroshenko and Russian President Vladimir Putin stiffly shook hands on Wednesday. But the gesture was undermined by the grim expressions on their faces, feeding concerns that "last chance" negotiations between the two men might not quiet the increasingly deadly war in eastern Ukraine.

Mr. Poroshenko and Mr. Putin met in the Belarusian capital of Minsk, with German Chancellor Angela Merkel and French President François Hollande mediating and urging the two men to find a diplomatic solution to a 10-month-old conflict that has already killed 5,300 people. Many fear the fighting is set to dramatically worsen.

"The entire world is waiting to see whether the situation moves toward de-escalation, weapons pullback, ceasefire or … spins out of control," Mr. Poroshenko said ahead of the lengthy negotiations, which carried on into the early hours Thursday. In separate remarks, he warned that Ukraine might introduce martial law if the peace talks failed.

According to a briefing given by a Ukrainian official to reporters in Minsk, the four leaders were working toward a declaration "reaffirming Ukraine's territorial integrity and sovereignty." A separate document to be signed by Mr. Putin and Mr. Poroshenko, as well as representatives of the Organization for Security and Co-operation in Europe, would reconfirm their commitment to a ceasefire agreed to last September. That deal dissolved almost as soon as it was made, amid accusations of violations by both sides.

Russian media reported that a new deal had not been reached Wednesday night. "There is progress, but it is not a simple conversation. More time is needed," according to the Sputnik news agency, quoting an unidentified diplomatic source.

The talks in Minsk were carried out amid a spike in the fighting in southeastern Ukraine, where Russian-backed rebels last year declared independent "people's republics" in the regions of Donetsk and Lugansk. In the background is the growing debate in the United States and Canada about providing weapons to the Ukrainian army, a move Ms. Merkel and other European leaders fear might cause Russia to deepen its own involvement in the conflict, perhaps even leading to a widening of the war.

On Wednesday, the United States announced it would begin training Ukrainian troops to fight the Russian-backed rebels. "We will train them in security tasks, medical [tasks], how to operate in an environment where the Russians are jamming [communications] and how to protect [themselves] from Russian and rebel artillery," U.S. Army Europe commander Ben Hodges said. The training, which will begin in March in western Ukraine, will involve one battalion of U.S. soldiers and three Ukrainian battalions.

Russia is accused of supplying the insurgency with soldiers and weaponry, an accusation it continues to deny even as Mr. Putin negotiated in Minsk on the rebels' behalf. The Kremlin acknowledges that some Russians have gone to Ukraine to fight, but says they are "volunteers."

Heavy clashes continued Wednesday, with the separatists tightening a siege around the crossroads city of Debaltseve, and Ukrainian forces continuing an offensive of their own along the coast of the Azov Sea. Fifty deaths were reported over the course of the day, including one person who was killed when an artillery shell struck a hospital in the city of Donetsk even as the Minsk negotiations were taking place.

While a ceasefire would be welcomed by residents living in the war-torn areas, a lasting solution seems out of reach. Russian demands are believed to include autonomous status for the Donetsk and Lugansk regions, but with the Ukrainian government continuing to provide them with cash transfers and social services.

A draft of the rebel demands published by several Ukrainian media outlets called for "constitutional reform in Ukraine, including deep decentralization by means of provision of the status of autonomy to certain districts of the [Donetsk and Lugansk regions]." The document also called for amnesty for all those who took part in the pro-Russian uprising.

Russia, angered by the revolution last year that ousted Moscow-backed Viktor Yanukovych in favour of the pro-Western Mr. Poroshenko, is also seeking guarantees that Ukraine will not join the NATO military alliance.

Such concessions would be almost impossible for Mr. Poroshenko to make, with many in Kiev warning that there could be fresh street protests if the government capitulates to the Kremlin's demands.

While Mr. Poroshenko said he "will not hesitate" to introduce martial law if the fighting continued to worsen, the step would be a severe one, directing more financial resources to the war effort, but likely also leading to a drop in foreign investment at a time when the Ukrainian economy is already collapsing, and the country is on the verge of bankruptcy.

A declaration of martial law would put at risk a $40-billion (U.S.) loan from the International Monetary Fund that the government is in the final stages of negotiating, with IMF chief Christine Lagarde set to make a statement about Ukraine on Thursday. 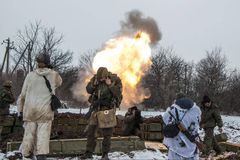 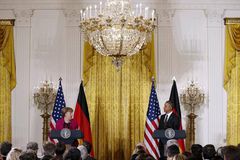