In front of the friendliest audience he is likely to find in China, Justin Trudeau called free speech "a true Canadian value" and called on China to do better.

"As a country that has seen firsthand the benefits of free expression and good governance, Canada encourages China to do more to promote and protect human rights," the Prime Minister said Thursday at a dinner organized by the Canada China Business Council in Shanghai.

In meetings with Chinese President Xi Jinping and Premier Li Keqiang, he said, he had argued the value of diverse perspectives – an oblique way of calling out China for its oppressive Internet censorship and police regime, which it uses to suppress threats to Communist Party primacy.

"In a world of rapid change, it is a diversity of ideas, and the free ability to express them, that drives positive change," Mr. Trudeau said.

The comments mark his strongest to date on his trip to China . Under pressure at home to send an unflinching message against China's intensifying clampdown on dissent and what it calls "Western values," Mr. Trudeau has chosen his words carefully to avoid angering his hosts and spoiling the new era in cross-Pacific relations he wants to build.

In that, he has almost certainly succeeded. Far from taking a stern tone, he has been largely complimentary toward China and its leadership.

His remarks hewed closely to those made by Angela Merkel in recent years. "You need an open, pluralistic and free society in order to shape the future successfully," the German Chancellor said in 2014 in Beijing.

Germany is among the few countries still willing to openly call for change in China.

Fear of economic retribution has muted others, who see more to gain for companies and their own national investment needs by quelling talk that might anger Beijing. Former British prime minister David Cameron, for example, would only say he had raised "human-rights issues" when meeting with Chinese leadership.

Canada has been more direct. On Wednesday, Canada's ambassador to China, Guy Saint-Jacques, said that "in the last three years we have seen, I think, things going backward," a reference to the crackdown under Mr. Xi.

China's foreign ministry did not respond Thursday to a request for comment.

Under Mr. Xi, China has also grown bolder in demanding others bite their tongues. In June, Foreign Minister Wang Yi caused shock in Canada when he told a reporter she had "no right" to question him on human rights.

But in China, those remarks have become the new standard in defending the country.

The outburst should serve as "a major alert" to other countries, said Du Ping, a former international affairs correspondent for Chinese state radio who is now a commentator on Phoenix TV.

"It is wrong to simply use criticism as a diplomatic tool against China," he said this week.

Others say it's time to stop being nice. Carefully nuanced "engagement" efforts have failed to make any change, Sophie Richardson, the China director at Human Rights Watch, wrote Thursday.

"Beijing responds only to the expectation of unpleasant consequences," she wrote in an essay for ChinaFile.

To pressure China on human rights, other countries should refuse to assist in Beijing's efforts to repatriate allegedly corrupt figures overseas, insist on meeting Chinese civil society figures and offer the pomp of state dinners not to the Chinese president, but to non-regime figures working for real change, she said.

"No number of statements will stem the tide of abuse," she wrote.

In China, meanwhile, observers nonetheless said it's unlikely the Canadian remarks would cause great offence.

Observers nonetheless said it's unlikely the Canadian remarks would cause great offence. Instead, they will be written off as domestic politicking.

"I don't think China will have much reaction," said Sun Zhe, a Chinese expert in international affairs.

"From the perspective of the Chinese government, he may be seen as too picky or strict. But generally speaking, Western statesmen are all like this." 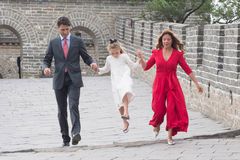 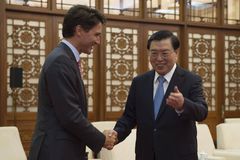