Front-runners Donald Trump and Hillary Clinton racked up big victories Tuesday, extending their leads over lagging rivals as they both sought to project an air of inevitability that they would be their party's presidential nominee and face each other in November.

Mr. Trump, who has upended the Republican race with a populist and often controversial campaign, won all five Northeastern states up for grabs, including delegate-rich Pennsylvania, along with Delaware, Connecticut, Maryland and Rhode Island.

Trump won big in each of the five states. His share of the popular vote ranged from about 55 per cent to 65 per cent. Ohio Governor John Kasich finished second in four of the states, further denting the hopes of Trump's chief rival, Ted Cruz, who finished second only in Pennsylvania.

"This is a far bigger win than we expected," Mr. Trump exulted in a victory speech at Trump Towers in New York.

But he continued to rail against the Republican Party's Byzantine system of awarding delegates. "The best way to beat the system is to have evenings like this with record-setting votes and record-setting wins."

He derided Cruz and Kasich, who agreed to an extraordinary non-compete pact in a bid to deny him the nomination.

"Governor Kasich and Senator Cruz have really hurt themselves," Mr. Trump said. "As far as I'm concerned it's over, those two guys can't win."

Then he quickly pivoted to November's election. "I consider myself the presumptive nominee," he said.

"We will beat Hillary so easily," he promised. "She would be a terrible president."

The five-state sweep by Mr. Trump reaffirmed his commanding lead and his claim that he deserves the Republican nomination despite efforts by his rivals and the party establishment to thwart him.

Mr. Cruz, the ultra-conservative Texas Senator was already campaigning Tuesday in Indiana and vowing to fight on.

"I got good news for you: Tonight, this campaign moves back to more favorable terrain," Mr. Cruz said in Knightstown, Ind., inside the high school gymnasium made famous by the underdog movie, Hoosiers.

On the Democrat side, Ms. Clinton sounded like she had already secured the nomination. "We will unify our party to win this election and build an America … where we lift each other up instead of tearing each other down," she said in a victory speech to cheering supporters in Philadelphia, where the Democratic Party will hold its nominating convention this summer.

Ms. Clinton won easily in Pennsylvania, Maryland and Delaware, with popular vote totals ranging from 56 per cent to 64 per cent. She defeated Sanders more narrowly in Connecticut.

The results confirmed her recent switch in strategy to all but ignore Sanders while focusing on her Republican opponents.

Ms. Clinton, in her victory speech, took aim at Trump for accusing her of trying to "play the woman card" in seeking to become the first female U.S. president.

"Well if fighting for women's healthcare and paid family leave and equal pay is playing the woman card, then deal me in," she said to cheers.

"With your help, we're going to come back to Philadelphia for the Democratic National Committee, with the most votes and the most pledged delegates," Ms. Clinton added before the crowd of 1,300 after she took the stage to the song Eye of the Tiger. "And we will unify our party to win this election and build an America where we can all rise together."

In recent days, she has sharpened her pitch about the general election's stakes, heading off Republican attacks on her record as secretary of state under President Barack Obama and delivering a more forceful message about the economy and the need to create jobs and lift wages.

"Donald Trump actually says wages are too high in America," Ms. Clinton said at a rally in Rhode Island on Saturday. "Honestly, I don't know who he spends his time talking to, but I recommend he get out of one of those towers and actually go down and talk to some folks who are working as hard as they can.".

Shortly after the polls closed, Mr. Sanders delivered what amounted to a concession speech on Tuesday's primaries while promising a crowd of passionate supporters in West Virginia that he intended to battle on.

Mr. Sanders insisted he was better placed than Ms. Clinton to beat Mr. Trump in November's presidential election. While there was no hint of surrender in Mr. Sander's speech, he is widely expected to temper his attacks on Ms. Clinton.

In Indiana, Mr. Cruz, who is pinning his hopes on thwarting Mr. Trump from securing sufficient delegates during the primaries and thus forcing a contested convention, also conceded that he lost on Tuesday.

But, as the primaries shift west to the 10 states still to vote, Mr. Cruz told cheering supporters his prospects would improve. Still, after being shut out Tuesday, Mr. Cruz will have a tough time convincing Republicans that he is the credible alternative to Mr. Trump.

But the two remain a study in contrasts: The hotly contested but entirely conventional Democratic race is far different from the sometimes vicious, often chaotic Republican contest that began with 17 hopefuls jostling to be the party's nominee to wrest the White House away from the Democrats after Mr. Obama's two terms.

Ms. Clinton, 68, the consummate establishment insider has – as governor's wife in Arkansas, first lady for eight years, two-term New York Senator, Democratic presidential hopeful who lost to Mr. Obama in 2008 and then his secretary of state for four years – been part of the U.S. political landscape for four decades. Respected and reviled, she is well-known to both her admirers and detractors.

In sharp contrast, Mr. Trump, 69, is a celebrity billionaire – replete with glitzy branded hotels, casinos, aircraft, a TV reality show, dazzling wives, costly divorces, bankruptcies – and, until he decided to run for president, only an occasional political gadfly whose most notorious previous foray was an effort to cast doubt on Mr. Obama's birthplace and thus his eligibility to be president.

But Mr. Trump has confounded pundits and conventional political wisdom to emerge as the Republican front-runner with millions more votes than his rivals. Even so, he has railed against the complexities of the varying methods each state's Republican Party uses to select and award delegates who will be the ones who actually vote for the nominee.

"It's as crooked almost as Hillary Clinton," Mr. Trump said before polls opened in Pennsylvania, the biggest prize among the states. But winning the statewide vote will only guarantee 17 of the 71 Pennsylvania delegates. The rest, three for each of the 18 congressional districts, are officially unbound and thus not required to vote for the winner at the Republican convention in Cleveland in July.

Mr. Trump needs 1,237 delegates on the first ballot to avoid a contested convention. To clear that simple majority, he needs to win nearly six of every 10 available delegates in the remaining states. So even a few defectors or disloyal delegates could determine whether his rivals manage to thwart Mr. Trump's bid to seal the nomination before the convention.

Ms. Clinton is expected to move swiftly to claim an early advantage against Trump. Her advisers and allies say she will spend the coming weeks honing her message for the general election and stepping up fundraising efforts that have lagged in the face of Sanders' challenge.

Ms. Clinton is not expected to publicly pressure Sanders to quit the race. Clinton advisers say that any efforts to muscle him out could backfire, angering his supporters and making it harder to unite the party for the fall.

Guy Cecil, the group's chief strategist, said the group might run ads against Mr. Trump or Mr. Cruz, "depending on how the Republican primary develops and whether they decide to launch attacks against Hillary."

Mr. Sanders, speaking to a big crowd in Huntington, W. Va., showed no signs of getting out of the race and said he was shedding light on inconvenient truths about how hard life was these days for some Americans.

"The reason that we are generating this enthusiasm is because we are doing something very unusual in contemporary politics. We are telling the truth," he said.

Earlier in the day, Mr. Sanders said on ABC's "Good Morning America" that his campaign was "handicapped" Tuesday because the states in play don't allow independents to participate. Still, he insisted he would stay in the race through the final contest in California and "then we'll see what happens."

Mr. Sanders' senior adviser, Tad Devine, said recently that the campaign would have to reassess things if the day went badly. But Mr. Sanders' wife, Jane, said Tuesday on MSNBC: "No, no, no. ... We're not talking about reassessing."

Senate Democratic leader Harry Reid said Tuesday that Sanders should do as he thinks best. But when Reid was asked if he thought his Senate colleague still had a path to nomination, he said, "No, I do not."

With files from Jim Sheppard, The Associated Press, Reuters and the New York Times 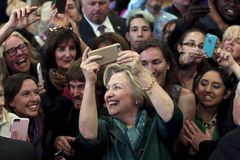 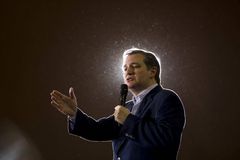 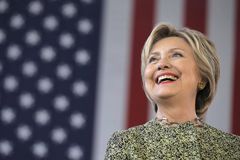