The American political world's latest range war – a struggle between a volatile Republican President and a scornful Republican senator that combines withering criticism of the commander-in-chief with grave warnings about global catastrophe – lays bare the seething tensions that have gripped Washington since Donald J. Trump became President but rarely have been visible publicly.

This capital has seldom if ever seen anything like it: a party establishment in full revolt against its own President, with a Republican lawmaker possessing many of the defining characteristics of Mr. Trump – a real-estate mogul late to politics, once an outsider but now in a position of power – raising scathing questions about the chief executive's competence, temperament, and mental and emotional balance.

So when Senator Bob Corker of Tennessee – chairman of the Foreign Relations Committee, traditionally the most prestigious panel on Capitol Hill, and a member of the Budget Committee, perhaps the most powerful – described the Trump White House as an "adult day care centre" and warned that the president might be putting the country "on the path to World War III,''the Trump era in Washington entered an entirely new phase.

The angry exchange that prompted Mr. Corker's critique was surely the low point of congressional relations in Mr. Trump's nine months in the Oval Office. But the vital unanswered question is whether it was the turning point in the Trump era: the beginning of overt hostilities not only between the capital establishment and the outsider President, but also of open warfare within the party that gave him its presidential nomination but has denied him any significant legislative achievement.

The comments from Mr. Corker, who is not running for re-election and thus has no fears for his future in the capital, were in some cases more arch, more critical, more contemptuous of Mr. Trump than those of congressional Democrats, themselves chary of alienating the sometime-Democrats who voted for Mr. Trump last November but who will cast judgment on them in next November's midterm congressional elections. Mr. Corker portrayed the President as unpredictable and unmanageable, if not actually unstable. "I know for a fact that every single day at the White House, it's a situation of trying to contain him," Mr. Corker told The New York Times in a telephone interview.

Mr. Corker's remarks sent shock waves across Washington, in part because they were so blunt, in part because Mr. Corker – quiet, deliberate, not given to rash judgments or impulsive statements – himself is seldom blunt. The Tennessee Republican, 65, a onetime mayor of Chattanooga, said the President comports himself "like he's doing The Apprentice or something," adding, "He concerns me. He would have to concern anyone who cares about our nation."

Congressional figures rarely if ever openly criticize a president of their own party, and never in language as stark as that employed by Mr. Corker. Indeed, Richard M. Nixon, considered the principal figure of polarization in modern American politics since his bitter 1946 California congressional race, had a better relationship with Capitol Hill Democrats than Mr. Trump has with congressional Republicans. Mr. Trump has openly attacked the GOP leader in the Senate, Mitch McConnell of Kentucky, who is responsible for advancing the President's agenda in the chamber.

In contrast to the Trump era, the GOP in the early Nixon White House years – relations changed as Watergate unfolded – always had the President's back.

The Republican Party when Mr. Nixon was in office was unified," said John R. Price, a Nixon domestic-policy aide to the president in the early White House years. "He was basically a centrist who managed to keep the party together – until Watergate. The Republicans felt great delight in having the presidency back after Kennedy and Johnson."

On the surface, congressional Republicans are delighted to have the White House back but – privately, until Mr. Corker made his reservations public –they now are uneasy with Mr. Trump's style, which is at odds with the party's traditional profile of morality, stability and frugality. They are, moreover, wary of his comportment, his priorities and – in the case of the budget deal he forged with Democrats last month and of the telephone call he made Friday to Senate Democratic leader Chuck Schumer proposing to broker a deal on health-care – his willingness to consort with Democrats to the exclusion of Republicans.

Mr. Corker made it clear that he was no lone wolf and that his views were shared by his fellow Republicans in the Senate. "Look, except for a few people, the vast majority of our [Republican] caucus understands what we're dealing with here," he said, adding that "of course they understand the volatility that we're dealing with and the tremendous amount of work that it takes by people around him to keep him in the middle of the road."

Mr. Corker is no obscure and inconsequential backbencher. As a member of the Budget Committee – and as a leading deficit hawk – he will play an important role in the Republican handling of Mr. Trump's tax overhaul plan. As chairman of the Foreign Relations Committee, he will be a vital figure both in the American response to Tehran if, as expected, Mr. Trump decertifies the Iran nuclear deal, and in confirming a new chief diplomat if Mr. Trump's impatience with Rex Tillerson leads to the firing, or the angry resignation, of the Secretary of State, a close friend of Mr. Corker.

In the background are Washington-noir memories of August, 1974, when sombre Republican lawmakers brought the Nixon presidency to its tragic conclusion. That is the sum of all White House fears right now: a threat that is not imminent – far from it – but that, Mr. Corker's remarks suggested, is not entirely implausible either. 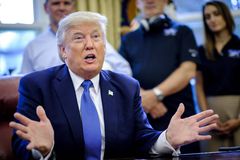