Mr. Trump called protesters criminals and "thugs who were flying the Mexican flag," after violence erupted Tuesday in the streets of Albuquerque, N.M. Inside, he inflamed his supporters urging them to "Go ahead, get them out of here," when protesters disrupted his rally.

Mr. Trump, the provocative billionaire, seems to revel in the seething violence riding shotgun in his bid to be president. He goads and insults even peaceful protesters, cheers when his supporters attack them and glibly compares demonstrators to terrorists who deserve the humiliating defeat Mr. Trump vows to deliver to all those – from Black Lives Matter activists to unfair Chinese trade mandarins – who would dare cross him if he reaches the Oval Office.

Not since the 1960s has violence so marred a presidential campaign. And not since the openly racist George Wallace vowed to kill civil-rights protesters in 1968 – by running over them with a limousine if elected – has a presidential candidate vowed violent retribution to opponents and openly urged his backers to beat those who dare challenge him.

It's stock-in-trade for Mr. Trump.

"I'd like to punch him in the face," Mr. Trump told a wildly cheering crowd after a protester tried to shout him down earlier this spring.

Another enraptured rally cheered when Mr. Trump said: "In the good old days, they'd have knocked him out of that seat so fast." At another rally, he urged: "Knock the crap out of them, would you? Seriously, okay? Just knock the hell." He offers to pay legal bills for those who do attack protesters.

Mr. Trump insists he doesn't condone, let alone advocate, violence. But his defence of supporters who use their fists and Mr. Trump's caustic demeaning of his detractors is central to his populist political insurgency to "Make America Great Again."

"When they see protesters, when they see what's going on in the country, they have anger," Mr. Trump explains, adding: "They don't like seeing bad trade deals, higher taxes, loss of their jobs."

Some are already comparing 2016's rising violence with the horrific 1968 presidential year. Martin Luther King Jr. was assassinated in Memphis and, weeks later, Robert Kennedy, only minutes after he won the California primary. The Democratic National Convention in Chicago that summer erupted in massive riots as police brutally attacked anti-war protesters who turned the city into a battleground. That was the year that Mr. Wallace promised: "When November comes, the first time they lie down in front of my limousine, it'll be the last one they ever lay down in front of."

Both the Black Lives Matter movement – spawned in the wake of outrage over a spate of killings of young, unarmed black men and youth by police and self-appointed security wardens – and the anti-globalization, anti-trade movement have shown a capacity to stage large and repeated protests. With an enraged Hispanic community determined to derail Mr. Trump's campaign and the candidate more than willing to provoke, incite and escalate, the elements for political violence are again in place.

While much of the violence to date has been in and around Trump rallies, the Republican National Convention in Cleveland in July could become the next big focal point just as the Democratic convention was in 1968 in Chicago.

Security in the wake of the 2001 terrorist attacks is far tighter than it was in the sixties and with the Secret Service in overall charge of the party conventions, protests may be kept far from the Quicken Loans Arena where the Republicans will gather.

Meanwhile, disparaging his detractors as thugs and criminals and cowards and liars, a favourite Trump tactic intended to whip up his supporters and show the candidate as a fearless leader, has struck a chord among many frustrated and angry Americans.

"You know what I hate," Mr. Trump said during one fracas at a rally when a protester was taken away after being shouted down: "We're not allowed to punch back any more. I love the old days. You know what they used to do guys like that in a place like this? They would be carried out in a stretcher, folks."

Not so subtly, that's his message to the world, not just citizens who oppose him.

It's a rallying cry: "We don't have time for all that petty, punk-ass little thuggery stuff that's been going on with these protesters," said Sarah Palin, the former Alaska governor, Tea Party darling and ardent Trump supporter. 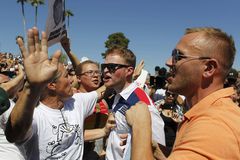