The dark side of the Tunisian revolution caught up with Lotfi Abdelli, one of the country's best-known comedians and actors, late last summer in Hammamet, a seaside resort town about an hour southeast of Tunis. His cross-country stand-up tour had gone badly, not for lack of crowds but because the crowds could not get to him.

Salafists – the ultra-puritanical Islamists who have been linked, and sometimes charged, with violence – had been blocking the doors to his shows. Mr. Abdelli, 41, who is making a career of poking fun at Tunisia's Islamist government, said he was refused police protection throughout his tour and had to load up with bodyguards.

Things turned ugly before his show in Hammamet. "The Salafists came with knives to kill me," he recalled recently in his house in Tunis. "There was a fatwa on me. I had to die."

His bodyguards made a flurry of calls to the police and, this time, they came to the rescue and the Salafists were dispersed. Mr. Abdelli thinks that the government officials finally ordered his protection only because the negative publicity would have been overwhelming had a star entertainer been injured, or worse.

Two years after the revolution that ended the career of dictator Zine El Abidine Ben Ali, who fled the country on Jan. 14, 2011, the revolution that launched the Arab Spring is fraying at the edges. Liberal opposition parties claim Tunisia's Arab Spring may become an Arab Winter if the violence and intimidation from Islamist extremists is not stopped.

Radical Islam is causing tension through the region. Two countries away, in Egypt, Islamists and secular forces were squaring off as late as Friday in Cairo's Tahrir Square, as thousands of opponents of President Mohammed Morsi and his Brotherhood allies gathered to demand the rights they say have been betrayed by Islamists. In neighbouring Libya, radical groups have tried to push their extreme version of Islam by force, calling for sharia law and destroying a Sufi shrine.

Tunisia has freedom of speech and assembly. A democratic election in 2011 voted in the Ennahda party. But the secular opposition parties, which control about 30 per cent of the seats in the National Assembly, say the revolution's success is being marred by the extreme wings of the Salafists and what are called Leagues for the Protection of the Revolution. Founded as neighbourhood protection squads in the chaotic and violent days of the revolution, they were legalized as associations by the government five months ago.

Abdelfattah Mourou, a lawyer who is a co-founder of Ennahda, said his party condemns the violence and has been arresting Salafists and league members thought to be responsible for the rash of violence against secular society in the past year. "The Salafists want to take Tunisia back to the 13th century," he said.

Salah Eddine El Jorshi, spokesman for the Tunisian League for Human Rights, said the government is trying to bring the extremists under control, though the police response to violence against secular society and the opposition parties was "inadequate" until recently.

The media is full of stories of violence, harassment and intimidation by the Salafists and the leagues. Attacks or harassment of artists, prostitutes, women in bikinis and cinemas have become routine.

While the Islamist government and leading Salafists officially condemn the violence, there is little doubt that the Salafists have no sympathy for secular views or even moderate Islam. "A Salafist is one who rejects modernity," said Abdel Almi, the Salafist who is president of the Association for Awareness and Reform, one of the many Salafist groups in the country.

Mr. Almi, for example, thinks Mr. Abdelli, the comedian, is an affront to Islam. Mr. Almi is not calling for violence, but said, "The people had the right to stop his show. His show was so cheap. He looked like someone who escaped from the zoo."

But the extremists' disdain can produce deadly results. On Sept. 14, three days days after the U.S. ambassador to Libya, Christopher Stevens, was killed in Benghazi, a mob attacked the U.S. embassy in Tunis and ransacked the American school nearby. The attackers, enraged by the release of an amateur American film that denigrated the Prophet Mohammed, were Salafists. In the riot, four attackers were killed by police and dozens were injured.

A month later, an elderly organizer of the Nidaa Tounes opposition party in the southeastern town of Tataouine died after the trade-union building in which he worked was attacked by the league. "They lynched him," said Mohsen Marzouk, 47, a human-rights activist who is also a leader in Nidaa Tounes. "How can we go to fair elections when we have the league intimidating everyone?"

A government spokesman said the organizer died of a heart attack, not a physical attack on him; an official investigation is under way.

Said Aidi, who was the transitional government's employment minister in 2011 and now a member of the opposition Republican Party, has the same view. During an otherwise peaceful union demonstration on Dec. 4 in Tunis, he said, he was attacked by league members. "I was just walking," he said. "They kicked me onto the ground and broke one of my ribs. Their goal is to prevent any critical opposition to the Islamist parties." 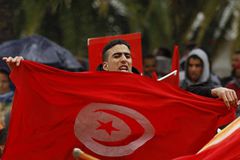 Investors in Northern Africa: We told you so Subscriber content
January 18, 2013 The Tunisian revolution is in trouble
January 14, 2013