Some say the nationwide protests that rocked Turkey's government the past two weeks were only about a grove of sycamore trees in the middle of the country's biggest city, a trifling issue for a local planning board to work out. But to the country's unapologetic Prime Minister, Recep Tayyip Erdogan, it was much more significant, and explains why he was willing to fight a large segment of public opinion and put his decade-long rule on the line.

For more than 200 years, on this site now known as Gezi Park, adjacent to Istanbul's central Taksim Square, there stood grand Ottoman-era military barracks – a testament to the power of the Ottoman Empire. Then came Kemal Ataturk, the father of the Republic, who wanted to Europeanize Turkey. In 1940, his successors had the barracks razed and the trees planted in their place.

Mr. Erdogan, the most prominent Turkish leader since Mr. Ataturk, hopes to be in power in some capacity in 2023, the 100th anniversary of the founding of the modern state. And, just as Mr. Ataturk ushered out the Islamic order that had dominated Turkey for 13 centuries, Mr. Erdogan and his Islamic-leaning Justice and Development Party (known as the AKP), have ushered it back in, making Islam once again a significant component of Turkish life.

That is what the Prime Minister wants this central square in Turkey's cultural capital to reflect. He wants the Ottoman barracks rebuilt to their former glory – even if they only house a shopping mall instead of troops – and a grand mosque built on Taksim Square.

Like a modern-day Peter the Great, who oversaw the design of Russia's capital in St. Petersburg, Mr. Erdogan is seeing to every detail of his urban masterpiece, intended to Islamify parts of the city.

"Our Prime Minister expressly wanted to reconstruct the artillery barracks," said Kadir Topbas, Istanbul's mayor and a member of Mr. Erdogan's AKP. Reportedly, the Prime Minister has personally ordered revisions to the blueprints of the planned Taksim mosque, and even decided which shawarma and kebab shops in the area should be demolished.

But in his determination to have his way, Mr. Erdogan gave short shrift to those who had objections to the plan. The result was two weeks of protests and police crackdowns.

Following a lengthy meeting at the Prime Minister's Ankara residence with a group that included representatives of the Taksim protest, a tentative agreement was reached Friday morning. Mr. Erdogan agreed to abide by an Istanbul court's ruling on the eventual fate of Gezi Park, and to submit his plans to a referendum if the court allows the project to go ahead. He also agreed to proceed with investigations into allegations of police brutality and misconduct during the protests.

For their part, the protesters who have remained in Gezi Park are expected to dismantle their camp, said government officials, though people are free to demonstrate in the park by daylight. It is not yet clear how the protesters will respond. If the protesters balk at the terms of the agreement, they may find they have lost the public goodwill they have created.

To be sure, it was a grudging concession by the Prime Minister, made without apology for his police forces' tactics. "It's not his style to apologize," said Umut Ozkan, director of the AKP in Esenler, a conservative, working-class district on the north side of Istanbul that is a stronghold of Mr. Erdogan's party. "The people love his style," he said.

There's no mistaking Mr. Ozkan's own style: He's intimidating. The taciturn former lawyer sits behind an enormous mahogany desk; to his right is a large aquarium in which six small sharks are in constant motion. It makes an impression.

Mr. Erdogan had to fight all his life, Mr. Ozkan says. "He fought the hegemons and won," he said, referring to the military and the Kemalist parties (that followed the secular ideology of Kemal Ataturk) that the AKP overcame to form a government. "He grew up in a neighbourhood like this one," he said. "When the people look at Tayyip, they see themselves, the way they want to be. He mustn't change."

When confrontation arises, Mr. Erdogan frequently conveys a sense of personal insult, a product, people say, of being a member of a marginalized social class – observant Muslims – who were treated with contempt by the secular elite that ruled the country. His speeches often play to the resentments felt by his constituency.

The protesters in Taksim Square "are vile enough to insult a prime minister of this country," he told a cheering crowd of supporters Sunday, whipping them into a fury. "Let us go and take care of them," the people shouted.

"Not now," he replied. "Defeat them at the ballot box next year."

Kasimpasa is the working-class neighbourhood in which Mr. Erdogan grew up. Hailing from the town of Rize on the Black Sea, the Erdogans made their way to Istanbul in the late 1950s and settled in this community on the shores of the Golden Horn, an inlet from the Bosporus.

Not much has changed here. Most people continue to live in the four- and five-storey apartment blocks that snake their way up the escarpment.

There are no trees or parks in Kasimpasa, and many of its citizens gather round the square in the centre of the community each evening. Boys either play soccer there amidst the adults, or climb over the fence and play on the concrete yard of the Piyalepasa primary school, where Mr. Erdogan studied and first played the game. It was a sport he played well enough to be considered for a spot on a professional team in Istanbul.

These are the people Mr. Erdogan continues to fight for, and he must feel betrayed by those who don't seem to respect his accomplishments: building a strong economy, bringing the military under civilian control and positioning the country as a rising global power.

In his speeches, he blames outsiders for the recent protests, people such as financial speculators, whom, he warns, "will be choked" if they are caught speculating on the decline of the stock market. He and many others also blame the foreign media.

Be that as it may, Mr. Erdogan did back off from his threats to the Gezi Park protesters on Friday, a decision that surprised many people.

There's only one person who could have calmed him down enough to be willing to compromise on something that matters so much to him, and that's President Abdullah Gul, his partner in politics for two decades.

"Only Gul has such a softening effect on Erdogan," said Mensur Akgun, a former professor of Turkey's Foreign Minister, Ahmet Davutoglu, and a founder of Global Political Trends Centre, an Istanbul research institution.

On Thursday, Mr. Gul acknowledged that he too had met with some of the protesters. "It is very important to listen first," he advised. "A middle way has to be found."

In the years in which Mr. Gul served as deputy prime minister to Mr. Erdogan, he kept the Prime Minister out of trouble, said Mr. Akgun. "Since Gul became President [in 2007], there's been no one in the PMO to keep him in check."

The two men do have an unofficial get-together every Thursday, something they've done for years, in which they set their strategy.

It was Mr. Erdogan who stood up to a military threat in 2007 and ensured that Mr. Gul was elected by parliament as President. And it was Mr. Gul who helped ensure that the military was brought under civilian control.

Faced with a self-imposed limit on the number of successive terms the Prime Minister can stay in office, Mr. Erdogan must step down in 2015 after his third term.

"He only needs to step down for one election," noted Mr. Ozkan, the AKP organizer in Esenler. "Then he can run again."

In between, Mr. Ozkan said, he expects Mr. Erdogan to run for president. And Mr. Gul may return to the AKP and run for prime minister

It's an arrangement similar to one used by another Russian leader, Vladimir Putin and his colleague Dmitry Medvedev.

If all goes according to plan, Mr. Erdogan will indeed be in power in Turkey to mark the centenary of the Turkish Republic.

Why Turkey's protesters are angry: "No way to run a democracy"
Subscriber content
June 14, 2013 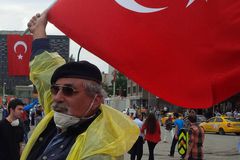 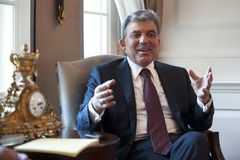