Two Canadians are among 18 people killed in a suspected Islamic extremist attack on a restaurant in Burkina Faso's capital Sunday night.

Global Affairs Canada identified one of the victims as Tammy Chen of Ontario. The other victim was Bilel Diffalah, who was a volunteer for Montreal-based Centre for International Studies and Cooperation, the organization said in a statement.

They were killed during an attack on Aziz Istanbul, a Turkish-food restaurant frequented by expatriates in Ouagadougou, late Sunday night. Foreign Affairs Minister Chrystia Freeland confirmed their deaths on Monday.

"It is with very great sorrow that I can confirm the deaths of two Canadians in yesterday's attack in Burkina Faso," Ms. Freeland told reporters on Parliament Hill on Monday. "The heartfelt condolences of our government go out to the loved ones of those targeted and the victims of this tragic attack. Canadian consular officials are working hard to provide assistance to their loved ones, as is our duty."

At the request of Ms. Chen's family, Global Affairs confirmed her identity on Monday afternoon. According to her Facebook account, Ms. Chen was studying for her PhD at the prestigious University of Cambridge in England; she also studied education at McGill University and Queen's University. She was a teacher with the Toronto District School Board before starting her PhD in 2013.

"Tammy is being remembered as a very passionate, charismatic and diligent teacher by her colleagues at Glen Ames, where she taught in the French Immersion Program," the TDSB said in a statement on Monday. "Not only was she respected and well-liked by students, parents and colleagues, she was always willing to go the extra mile to help students."

In July, Ms. Chen and her husband, Senegal native Mehsen Fenaiche, intended to celebrate their recent wedding with his family in Dakar, but the ceremony was cancelled when Mr. Fenaiche's grandmother passed away, said Fama Diouf, a Dakar-based photographer. Instead, the couple staged a matrimonial photo shoot with Ms. Diouf at the city's Radisson Hotel to share with friends and family, she said.

Ms. Chen was four months pregnant at the time, Ms. Diouf said, and wore a wedding dress for the occasion. "She was a little bit shy in the beginning … but in the end, it was a fun photo shoot. She was in a very, very good mood," the photographer recalled. "There was a lot of affection. They were very, very close."

On Sunday night, attackers arrived the at the Turkish-food restaurant on motorcycles and began shooting at patrons, according to a spokesman of the Burkina Faso security forces. Local authorities said the other victims included two Kuwaitis, and one person each from France, Senegal, Nigeria, Lebanon and Turkey. Authorities said several Burkina Faso citizens were also killed.

While no one immediately claimed responsibility for Sunday's attack, which continued into the early hours on Monday, experts say it resembles recent attacks on other establishments popular among the expat community. Al-Qaeda in the Islamic Maghreb has claimed responsibility for other attacks in West Africa, including the January, 2016, siege at the Splendid Hotel and the Cappuccino Cafe in Ouagadougou that killed six Canadians from Quebec on a humanitarian mission.

"It's basically a re-enactment of what we saw a year and a half ago. Basically 200 metres away from the other restaurant that was targeted," said Cédric Jourde, a University of Ottawa professor who specializes in Islamic politics in Africa.

"These groups track targets that are highly visible – restaurants or hotels of the capital city. So you strike at the very heart of the country as an attempt to show that the government is weak."

Global Affairs Canada updated its travel advice for Burkina Faso Monday to inform Canadians of the attack and recommended they avoid the affected area. The government recommends Canadians exercise a high degree of caution in Burkina Faso due to the threat of terrorist attacks.

Burkina Faso, a landlocked nation in West Africa, is one of the poorest countries in the world. Canada and Burkina Faso have had a diplomatic relationship since 1962, according to Global Affairs Canada's website, which adds that Canada is the country's largest foreign investor. Bilateral trade between the two countries totalled $72-million in 2015, with Canada mostly importing minerals. Canadian mining firms are majority shareholders in three of the five most advanced mining projects in Burkina Faso.

A number of Canadian aid groups also work in the country. CECI, for which Mr. Diffalah was an adviser for hygiene and biosecurity, has had a presence in the country since 1985. Oxfam Quebec said it asked its staff in Burkina Faso to work from home on Monday. Generally speaking, it said the delivery of its programming has become increasingly complex and challenging amidst the series of attacks in Burkina Faso and the surrounding region.

With files from The Globe and Mail's Eric Andrew-Gee, Caroline Alphonso and the Canadian Press

At least 18 killed in attack on restaurant in Burkina Faso
August 13, 2017 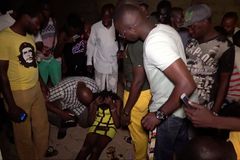