The country's economy is in a free fall, expected to shrink by as much as 10 per cent this year. The government, over just a few months in office, has lost control of several regions to a deadly separatist insurgency.

If ever there were conditions for a protest vote, Ukraine surely met them ahead of Sunday's parliamentary election. Yet when Ukrainians cast their ballots, they gave President Petro Poroshenko and Prime Minister Arseniy Yatsenyuk a surprisingly strong mandate to carry on.

It's not that Ukrainians are happy with their country's situation. Far from it. But the message from the election is that they don't – yet – hold Mr. Poroshenko and Mr. Yatsenyuk accountable for their troubles. They blame Russian President Vladimir Putin.

Mr. Putin is seen as having launched an undeclared war on Ukraine following the February ouster of the Moscow-backed government of Viktor Yanukovych in a revolution that brought pro-Western politicians such as Mr. Poroshenko and Mr. Yatsenyuk to power. Since then, Russia has annexed the Crimean Peninsula, and backed the separatists who have seized chunks of the southeastern regions of Donetsk and Lugansk.

"People are blaming the hardships on Putin," said Mychailo Wynnyckyj, a political analyst at the Kyiv-Mohyla Business School. "If it weren't for the fact Putin had invaded, the problems would be internal and there would be a domestic politician to blame."

Instead, Mr. Yatsenyuk's People's Front party appears to have unexpectedly captured the largest share of the votes, followed closely by the President's coalition, the Petro Poroshenko Bloc. With just over 60 per cent of the votes counted, both parties had won somewhere between 21 and 22 per cent of the vote.

While Mr. Poroshenko's job wasn't on the line (he was directly elected in May), the strong showing for the Popular Front all but guarantees Mr. Yatsenyuk will return as prime minister. Opinion polls had the party running third as recently as last week, but "the last 10 days of the campaign were run on a very simple message – if you like Yatsenyuk as premier, vote [Popular Front]," said Prof. Wynnyckyj. That appears to have led to a last-minute doubling in support for the Popular Front.

Third place – with a little more than 11 per cent of the vote – went to the upstart Self-Reliance party, a pro-Western bloc headed by Andriy Sadovyy, the popular mayor of the city of Lviv. Together, the three parties will have enough seats to easily control the 450-seat Rada, or parliament, which had been dominated by old-order politicians who in many cases owed their political careers to Mr. Yanukovych and to Moscow.

The Kremlin may take heart from the fact the Opposition Bloc – created from the remnants of Mr. Yanukovych's Party of Regions – won a surprisingly strong 10 per cent of the national vote, and was on track to win a plurality in the eastern Kharkiv region, as well as in those parts of Donetsk and Lugansk that were able to take part in Sunday's vote. Several analysts said they expected fighting in the east would now restart, with the election providing encouragement to the rebels and their backers in Moscow by suggesting their popular support beyond Donetsk and Lugansk to Kharkiv as well.

One outcome that didn't materialize in Sunday's election was the hard-right Ukrainian nationalist surge predicted by Russian media and some opinion polls. The Radical Party, which had been predicted to finish second to Mr. Poroshenko's bloc, was on track to finish a distant fifth, with less than 8 per cent of the vote. Two other right-wing parties, Freedom and Right Sector, looked likely to fall short of the 5-per-cent threshold required to win seats in the Rada.

That doesn't mean the road ahead will be easy. Not only is gross domestic product tumbling, but inflation was up 17.5 per cent in September over the same month a year before, while the Ukrainian currency, the hryvnia, has lost more than a third of its value against the dollar and the euro this year.

A tussle with Russia over natural gas deliveries – which saw the Kremlin-controlled Gazprom cut Ukraine off in June, and demand more than $5-billion (U.S.) in back payments – will get more punishing as winter approaches.

Meanwhile, a September ceasefire in Donetsk and Lugansk – negotiated by Mr. Putin and Mr. Poroshenko but opposed by Mr. Yatsenyuk – has been repeatedly violated, with each side blaming the other. 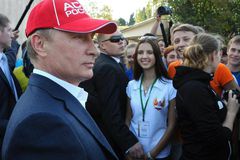