Even as it was arresting, torturing and imprisoning human-rights lawyers, the Chinese government blocked discussion of its actions on local social media, including images distributed by those drawing attention to what had taken place.

Researchers at the University of Toronto's Citizen Lab discovered that WeChat, China's digital-communication lifeblood, has censored 42 combinations of terms related to the "709 crackdown," so called because it began on July 9, 2015.

Nearly 250 lawyers and activists have been questioned, detained and arrested since 2015. Several have provided what foreign governments, including Canada, have called credible details of torture. Twelve of their names are included among the blocked terms.

The digital redactions illuminate how Chinese censorship is "reactive to news events. And compared with other events or categories of censored keywords, the 709 crackdown is one of those censored on a higher frequency," said Lotus Ruan, a research fellow at Citizen Lab.

Inside China, information on the lawyers "has been sanitized or harmonized, so a lot of information is officially-approved information."

And in what the researchers called a new revelation, China's sophisticated censorship tools have expanded to include the ability to peer at digital photographs and delete those deemed sensitive. The blocking even extends to altered images.

"This finding is the first documentation of image filtering on the app," the researchers wrote in a report titled We (can't) Chat. It "reveals the high level and extent of censorship enforced on this popular chat app."

Those images included pictures of people holding signs with the slogan "Oppose Torture. Pay attention to Xie Yang" – one of the arrested lawyers who provided chilling details of his interrogation. Mr. Xie told his lawyers he was punched, kicked and kneed by interrogators who left him temporarily crippled and at one point threatened: "I'm going to torment you until you go insane."

Chinese suppression of speech goes beyond eliminating those details from its domestic Internet. On March 28, lawyer Chen Jiangang, who has represented Mr. Xie, also received a message that his WeChat account had been permanently cancelled.

Mr. Chen so commonly experiences chat censorship that he said "it's no longer strange at all." But for others, it can cause fear, he said, by driving home the feeling that they are being "monitored or taken noticed of by the security police."

Often, however, censorship on platforms such as WeChat is done invisibly, meaning a sender doesn't know that a blocked message has not reached its recipient. Message blocking is primarily directed at users with accounts registered to mainland China phone numbers. Messages and images are more commonly expunged in group chats than individual conversations.

Images are also censored from WeChat Moments, which functions somewhat similar to a Facebook news feed. "Higher attention is being paid to group chat and Moments," Ms. Ruan said.

Searches related to the crackdown on lawyers were censored, too, on Sina Weibo, a Twitter-like service, where 60 keyword combinations were blocked.

Stripped of other sources of information, users of the local Chinese Internet are left with only the government narrative.

On Baidu, the primary search engine in a country that blocks access to Google, the top result for "709 case" points to a July 7, 2016, editorial in the nationalist tabloid newspaper, Global Times, which argued that it was a greater violation of law for foreign countries to attack Chinese human rights, than for China to arrest those it deems subversive.

The Citizen Lab researchers said their work "highlights the challenges faced by individuals, NGOs, and the international community in conducting advocacy work related to the '709 Crackdown,' as well as many other politically sensitive cases in China." 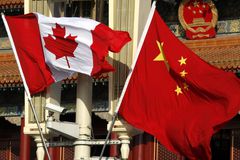 Canadians wary of growing economic relationship with China, a new poll suggests
April 11, 2017
Follow Nathan VanderKlippe on Twitter @nvanderklippe
Report an error Editorial code of conduct
Due to technical reasons, we have temporarily removed commenting from our articles. We hope to have this fixed soon. Thank you for your patience. If you are looking to give feedback on our new site, please send it along to feedback@globeandmail.com. If you want to write a letter to the editor, please forward to letters@globeandmail.com.
Comments