Authorities blocked access to social media and police arrested an opposition leader as Uganda's President sought to extend his 30-year grip on power in a bitterly contested election on Thursday.

President Yoweri Museveni, who seized power in 1986 and is heavily favoured to win the latest election, said the temporary ban on Facebook and Twitter on election day was necessary because some Ugandans were "telling lies" and "misusing" social media.

"There must be steps taken for security, to stop so many creating trouble," the President told Ugandan media. "You know how they misuse them, telling lies. If you want a right, then use it properly."

Police fired tear gas to disperse voters who protested long delays in providing ballots and election materials at some voting stations. The main opposition leader, Kizza Besigye, was arrested for the second time in four days. He was charged with "criminal trespass" when he went to the gates of an unmarked police-intelligence building, which he alleged was a vote-rigging centre.

Mr. Museveni, 71, is just the latest African leader to attempt to orchestrate the continuation of his rule, despite growing calls for term limits. At least 15 leaders across Africa have served more than two terms or announced plans to do so. In a youthful continent where the average age is 19, many leaders are elderly and unwilling to give up any power. The average age of the 10 oldest African presidents is 78. The oldest, Robert Mugabe of Zimbabwe, turns 92 on Sunday.

Mr. Museveni himself had once scathingly criticized African leaders for their tendency to cling endlessly to power. In 1986, after a five-year bush war in which he led his guerrilla army to victory, he proclaimed: "The problem of Africa in general and Uganda in particular is not the people, but leaders who want to overstay in power."

But once he got a taste of power, Mr. Museveni seemed to forget those words. He became increasingly dominant in a system that revolved around his personal rule, backed by the military. In 2005, he allowed multi-party elections for the first time, but he also scrapped term limits, allowing himself to rule indefinitely. He is also now expected to get rid of the constitutional age limit of 75.

Mr. Besigye, his former ally and personal physician, has run unsuccessfully against Mr. Museveni in three past elections, often suffering harassment by the police. He has been repeatedly arrested, roughed up or confined to house arrest. On Monday, he was tear-gassed again when police broke up an opposition rally.

Mr. Museveni has always exploited the advantages of power to ensure that the opposition has little chance of beating him. A recent study by an independent civil society group found that he has spent more than $7-million (U.S.) on his current presidential election campaign. That's 12 times more than the amount spent by his top two opponents combined, the study found.

His supporters, including a controversial unit of pro-regime "Crime Preventers," have routinely used intimidation tactics against the opposition. A police chief, for example, warned that the "Crime Preventers" would be armed with guns and ready for "war" against anti-government protesters. A senior member of the ruling party told opponents that the government will "kill your children" if they protest the election results this week.

The ban on social media was sharply criticized by human-rights groups and diplomats. But it was part of a larger trend of harassment of the media, including physical attacks on journalists and the closing of radio stations.

Though the Museveni government is often criticized for human-rights abuses and crackdowns on the opposition, it has benefited from the strong support of the United States, which sees Uganda as a key ally in the fight against Islamist radicals in Somalia. In recent years, Uganda has become one of the top African recipients of U.S. security assistance.

Official results of Thursday's election are expected to be released by Saturday. Vote-counting was continuing on Thursday night, sometimes by the light of lamps and cellphones in darkened voting stations. Early provisional results, from less than 5 per cent of voting stations, showed Mr. Museveni in the lead. 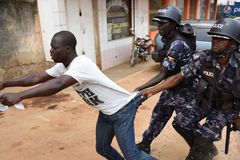 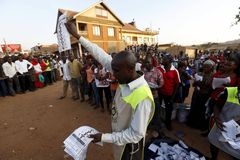 Ugandans, with Canadian support, learn how to flex their constitutional muscle
November 30, 2015