The British government has cited the apparent abduction of Chinese-Canadian billionaire Xiao Jianhua in a new report that highlights concerns about potential abuses of human rights and freedoms in Hong Kong, the semi-autonomous former British colony.

The prominent inclusion of the Xiao case in the Sept. 14 report by the Secretary of State for Foreign and Commonwealth Affairs indicates that Britain fears that Hong Kong's "one country, two systems" governance framework is no longer guaranteeing certain freedoms that were implemented in 1997, when Hong Kong was returned to Chinese rule. They included a high degree of autonomy from Beijing and an independent judiciary.

In his opening statement on the biannual Report on Hong Kong, which has been submitted to the British Parliament, Foreign Secretary Boris Johnson said that "we cannot ignore that important areas of the 'One Country, Two Systems' framework are coming under increasing pressure."

The Canadian government has not published a report expressing similar concerns but has been using diplomatic muscle to lobby for Mr. Xiao's release, to no avail. The Xiao affair comes at a sensitive time in Sino-Canadian affairs – Canada and China are pursuing closer ties through a free-trade agreement.

In a reference to the growing number of apparent abductions from Hong Kong, the report's concluding statement said examples of the "increasing pressure" included "further reports of mainland security officials operating within the SAR" – the Special Administrative Region that includes Hong Kong and Macau, a former Portuguese colony.

Mr. Xiao is in his mid-40s and owns the Tomorrow Group, a diversified conglomerate whose assets include banking, insurance and real estate. Their activities made him one of China's richest men. A 2014 New York Times article said Mr. Xiao "has assiduously courted the party elite, including the family of its current President, Xi Jinping, becoming something of a banker for the ruling class and a billionaire in his own right."

He obtained Canadian citizenship, though China does not recognize dual citizenship, and several members of his family are believed to live in Canada.

Mr. Xiao was last seen leaving his apartment in Hong Kong's Four Seasons Hotel on Jan. 27. His head was covered as he was propelled out in a wheelchair, surrounded by half a dozen unidentified men, at about 3 a.m. A source who knows the family told The Globe and Mail that he may have been sedated and that he is thought to be in Shanghai.

Efforts by the Canadian consulate in China to meet him have gone nowhere.

The British government report, supported by various media articles, said Mr. Xiao's wife reported his disappearance to the Hong Kong police on Jan. 28 and, mysteriously, withdrew her complaint about his apparent abduction 24 hours later. A few days after his disappearance, Hong Kong's Ming Pao newspaper (which publishes a Canadian edition) carried a front-page ad, purportedly from Mr. Xiao, denying that he had been detained while claiming he was "receiving treatment overseas."

But the British government report noted "the numerous similarities between Xiao Jianhua's apparent abduction and the case of the Hong Kong booksellers, including British citizen Lee Po, who was involuntarily removed from Hong Kong to mainland China in late 2015." One of the five booksellers, a Swedish citizen named Gui Minhai, remains in Chinese detention.

It is not known why Mr. Xiao has apparently earned the attention of Communist Party leaders, although he has been the subject of corruption allegations. Evidently, his connections to the political and business elite were not enough to protect him and may have worked against him.

Former Canadian prime minister Brian Mulroney and the federal Liberal government have tried to win the release of Mr. Xiao. A memo obtained by The Globe and Mail earlier this year from the law firm Norton Rose Fulbright indicated that the Xiao file has been pushed high on the list of Global Affairs' priorities. The memo said that both Foreign Affairs Minister Chrystia Freeland and her deputy, Ian Shugart, are involved in the file.

"Minister Freeland acknowledged the sensitivity of the [Xiao] issue as the government 'has a lot invested' in trade negotiations which are just about to begin with China," the memo said. 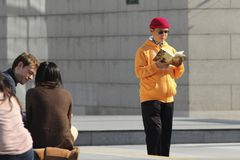 Canadian citizen detained in Beijing locked in room as punishment
May 4, 2017
Globe editorial: China must end its cruel detainment of government critics
March 21, 2017
Follow Eric Reguly on Twitter @ereguly
Report an error Editorial code of conduct
Due to technical reasons, we have temporarily removed commenting from our articles. We hope to have this fixed soon. Thank you for your patience. If you are looking to give feedback on our new site, please send it along to feedback@globeandmail.com. If you want to write a letter to the editor, please forward to letters@globeandmail.com.
Comments