Britain said on Thursday that any decision by Ecuador to give Julian Assange political asylum wouldn't change a thing and that it might still revoke the diplomatic status of Quito's embassy in London to allow the extradition of the WikiLeaks founder.

The high-profile Australian former hacker has been holed up inside the red-brick embassy in central London for eight weeks since he lost a legal battle to avoid extradition to Sweden, where he is wanted for questioning over rape allegations.

Britain's tough talk on the issue takes what has become an international soap opera to new heights since Mr. Assange angered the United States by publishing secret U.S. diplomatic cables on his WikiLeaks website. It may also raise difficult questions for London about the sanctity of embassies' diplomatic status.

The Ecuadorean government, which said it would announce whether it had granted Mr. Assange's asylum request on Thursday at 7 a.m., has said any attempt by Britain to remove the diplomatic status of its embassy would be a "hostile and intolerable act".

"It is too early to say when or if Britain will revoke the Ecuadorean embassy's diplomatic status," a Foreign Office spokesman said. "Giving asylum doesn't fundamentally change anything."

"We have a legal duty to extradite Mr. Assange. There is a law that says we have to extradite him to Sweden. We are going to have to fulfill that law."

Outside the embassy, British police tussled with protesters chanting slogans in support of Mr. Assange and at least three supporters were detained.

"We want to be very clear, we're not a British colony. The colonial times are over," Ecuadorean Foreign Minister Ricardo Patino said in an angry statement after a meeting with President Rafael Correa.

Britain's threat to withdraw diplomatic status from the Ecuadorean embassy drew criticism from some former diplomats who said it could lead to similar moves against British embassies.

"I think the Foreign Office have slightly overreached themselves here," Britain's former ambassador to Moscow, Tony Brenton, told the BBC.

"If we live in a world where governments can arbitrarily revoke immunity and go into embassies then the life of our diplomats and their ability to conduct normal business in places like Moscow where I was and North Korea becomes close to impossible."

Ecuador's embassy, near London's famed Harrods department store, has been under tight surveillance, with police officers manning the entrance and patrolling its perimeter.

A group of pro-Assange protesters gathered outside the building overnight in response to a rallying call by his supporters on social media websites.

Wearing trademark Guy Fawkes masks - to evoke the spirit of the 17th century English plotter - they held banners and blasted out songs by punk group The Jam from a portable speaker.

A Reuters reporter saw at least three protesters being dragged away by police. About 20 officers were outside the embassy trying to push away the crowd of about 15 supporters.

"I am upset that the British government is willing to go in there and take him by force," said Liliana Calle, 24, an Ecuadorean student waving her country's flag outside the embassy. "It makes me think they don't believe in human rights."

In what appeared to be prank, taxis lined up outside the embassy asking for Julian Assange.

"I've lived, worked and travelled in places with proper dictatorships and nowhere have I seen violations of the Vienna convention to this extent," said Farhan Rasheed, 42, a historian wearing an "I love Occupy" badge, outside the embassy.

"Here we have a government which claims to be a government of law and justice, stretching and possibly about to break a serious binding international agreement."

Swedish prosecutors have not yet charged Mr. Assange, but they believe they have a case to take to trial.

Mr. Assange fears Sweden could send him on to the United States, where he believes authorities want to punish him for publishing thousands of diplomatic cables in a major embarrassment for Washington.

Even if he were granted asylum, Mr. Assange has little chance of leaving the Ecuadorean embassy in London without being arrested.

But lawyers and diplomats see those scenarios as practically unworkable.

Ecuador's leader Mr. Correa is a self-declared enemy of "corrupt" media and U.S. "imperialism", and apparently hit it off with Mr. Assange during a TV interview the Australian did with him in May. Mr. Correa joked then with Mr. Assange that he had joined "the club of the persecuted".

The Ecuadorean government has said it wants to avoid Mr. Assange's extradition to Sweden, but if it did decide to grant him asylum it would offer no legal protection in Britain where police will arrest him as soon as they get a chance. 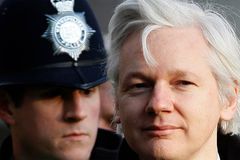 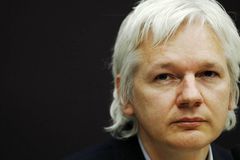 new
WikiLeaks announces release of e-mails damaging to Damascus
May 1, 2018 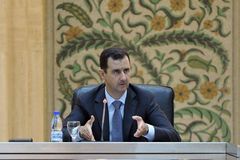