Ukrainians took to the streets three weeks ago aiming to force President Viktor Yanukovych to sign a trade agreement that would bring the country closer to the European Union. By Thursday, when Mr. Yanukovych finally declared he was ready to bend to that demand, it was too late.

Now, opposition leaders say that only the fall of Ukraine's government will satisfy the crowds who gather night and day at the dug-in encampment on Kiev's snowy Independence Square.

That the protesters are no longer content just to see the trade deal signed – and the country moved a step closer to Europe and further from Russia – is evidence of how much momentum the demonstrators now feel they have, and how acrimonious the country's dangerous political crisis has become. The opposition's next test may come this weekend, as busloads of pro-Russian activists are expected to arrive in Kiev to hold their own rallies in support of Mr. Yanukovych.

In interviews with The Globe and Mail, Viktor Yushchenko, the former pro-Western president of Ukraine, and Oleg Tserev, a key adviser to Mr. Yanukovych, traded accusations of foreign meddling in the country.

Mr. Yushchenko, who has tried to position himself as a mediator between the government and the opposition, warned that Moscow was meddling in Ukraine and would do whatever it took to retain its influence in the country.

"They will do everything to make Ukraine a colony again, to make Ukraine a part of Russia," he said. "It's a key moment, and not only for Ukraine. If you look at the whole continent of Europe, you see two political blocs – one is European and democratic, with its capital in Brussels; the other is Asian-style imperialism, with its capital in Moscow. These are two different worlds."

Mr. Tserev, a top parliamentarian in Mr. Yanukovych's Party of Regions, accused the United States and the EU of trying to foment another revolution in the country – akin to the 2004 Orange Revolution that brought Mr. Yushchenko to power – and warned that Moscow would not accept a repeat of that result.

Mr. Yanukovych shocked many Ukrainians on Nov. 21 by walking away from the EU pact, in favour of closer ties with Moscow. His government seemed to reverse direction again on Thursday, with Deputy Prime Minister Serhiy Arbuzov saying after a meeting with EU diplomats in Brussels that Ukraine would "soon" sign the agreement.

The deal, which would open the EU market to Ukrainian goods in exchange for a series of political and economic reforms, is seen as a crucial step on the way to eventual EU membership for Ukraine. It would also be a major blow to Russian President Vladimir Putin's plans to integrate the former Soviet republic into his own Moscow-led trading bloc. Russia – which supplies the gas that powers much of Ukraine's economy and is a key market for its exports – has warned that Ukraine would face economic punishment if it signed the EU deal.

Opposition leaders scorned Mr. Yanukovych's latest change of heart on Thursday as insincere. They said they would continue to seek the ouster of the President, who has inflamed the situation by twice ordering riot police into the streets in failed efforts to force an end to the protests.

"Yanukovych has said he wants to sign the agreement with the European Union tomorrow, but we don't believe him," former parliamentarian Ivan Zayets told a crowd of more than 10,000 Thursday evening. "Our demands are the same. The resignation of the government, because the government is a Kremlin-ruled government."

His suspicion and anger was shared by many of those bedding down for another cold night on Independence Square. "Too many people have suffered for us to go home," said Nataliya Ivaniv, an 18-year-old medical student serving as a volunteer nurse at the protests. "We don't want this President anymore. We'll stay until we win."

Like many of the protesters, Ms. Ivaniv hails from western Ukraine, where Mr. Yanukovych's support is weak. He won less than 15 per cent of the vote in the 2010 presidential election in cities such as Lviv and Ivano-Frankivsk, and less than 30 per cent in Kiev (where the wide majority supported former prime minister Yulia Tymoshenko, who was later jailed on charges many see as politically motivated). Largely silent for the past three weeks has been the east of the country, industrial cities such as Donetsk and Lugansk, where Mr. Yanukovych won upward of 85 per cent.

That's likely to change this weekend. Plans are being made for busloads of the President's supporters to be brought into the capital for a show of strength that the government is hoping will rival the hundreds of thousands the opposition has been able to muster in Kiev on recent weekends.

Thousands of Mr. Yanukovych's supporters gathered Thursday in a park just two kilometres from Independence Square. The rally lacked the enthusiasm of the anti-government protests, and several of the protesters hinted they were there for reasons other than devotion to Mr. Yanukovych. "I can't talk to you," whispered one middle-aged woman. "I will only say that I support the [protests on] Independence Square." Others said they were worried that a trade deal with the EU would bring economic punishment from the Kremlin.

Unlike the Ukrainian-speaking, Western-leaning centre and west of the country, much of the east and south of this country of 46 million speaks Russian as a first language and sees closer ties with Moscow as desirable. Pro-Yanukovych media there has promoted the idea that the protests in Kiev are a foreign-sponsored effort at a revolution.

Some worry that the rival weekend rallies could spark clashes between pro- and anti-government protesters. Ukrainian media reported that several cities in the Crimean Peninsula – a Russian-speaking region that backs Mr. Yanukovych – had formed "self-defence units" of several hundred people each that were headed to Kiev this weekend "to protect public order and the constitution."

Mr. Tserev warned that the other half of Ukraine would rise up – with Russian help – if the EU-inspired protesters got their way and forced Mr. Yanukovych to either sign the trade deal or resign. "I think if Russia loses [the power struggle], it will surely take revenge in the future," he said. "Anti-European protest movements will appear within half a year or a year." 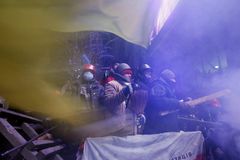 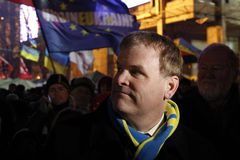