Ukraine accused Russia on Saturday of having staged a "military invasion" of the country, saying Russian troops had seized one village outside Crimea and briefly landed at another.

In a statement posted to its website, Ukraine's Ministry of Foreign Affairs said 80 Russian soldiers – supported by four helicopter gunships and three "armoured combat machines" – seized the town of Strilkove on Saturday. Strilkove, which is home to 1,300 people, is about 16 kilometres outside of Crimea, on a thin peninsula in adjacent Kherson oblast.

Earlier in the day, the Ukrainian Defence Ministry said it had "repelled" – apparently without any shots being fired – another landing by dozens of Russian paratroopers 28 kilometres further into Kherson oblast, at Arbatskaya Strelka. The Ukrainian military said its air force had been used in forcing the Russians to withdraw.

The alleged incursions come one day before a referendum in Crimea, a predominantly Russian-speaking region on Ukraine's Black Sea coast, asking its two million residents whether they wish to join the Russian Federation.

The Kherson region supplies Crimea with most of its electricity, water and natural gas. The paratrooper landing at Arbatskaya Strelka appeared aimed at capturing a natural gas distribution facility there.

There was no immediate confirmation or denial from the Russian Foreign Ministry of the military moves outside Crimea. On Friday, Russian Foreign Minister Sergei Lavrov told U.S. Secretary of State John Kerry at a meeting in London that Moscow "has no, and cannot have, any plans to invade the southeast region of Ukraine."

If the Ukrainian accusations are correct, the incursions would mark a serious escalation of the crisis here, which began last month when pro-Western protesters in Kiev ousted the Moscow-backed government of Viktor Yanukovych.

Moscow terms the revolution a violent coup, and has refused to recognize the new government in Kiev, which it says is allied with ultranationalist and fascist groups intent on repressing the country's Russian-speaking population. Russia has given military and political support to the breakaway government in Crimea, and has hinted it could intervene militarily in other parts of Ukraine.

Ukraine says Russia has already deployed almost 20,000 troops in Crimea, which ordinarily hosts the sailors and soldiers affiliated with Russia's Black Sea Fleet, ahead of Sunday's referendum. Tens of thousands more – plus artillery and tank units – are currently taking part in snap exercises in areas near Russia's border with eastern Ukraine, while Kiev is hastily mobilizing a new National Guard to supplement its own underprepared military forces.

Worries are high that Russia will decide to send troops into eastern Ukraine, which has seen violent clashes this week between pro-Russian and pro-Kiev protesters in the cities of Kharkiv and Donetsk.

The Russian Foreign Ministry said Saturday that it was "receiving many appeals from peaceful citizens who are asking for protection." The requests for Russian help "will be considered," the ministry said.

Despite the heightened tension in other parts of Ukraine, Simferopol, the capital of Crimea, was quiet on the eve of the referendum, which is expected to easily pass. The 24 hours before the voting begins – 8 a.m. local time on Sunday – were declared "a day of calm," meaning no demonstrations for or against joining Russia were allowed.

The Ukrainian government says the referendum is illegal and will not change Crimea's status. On Saturday, parliament in Kiev voted to fire the Crimean government.

However, Moscow says the referendum is legitimate, citing Kosovo's unilateral declaration of independence from Serbia in 2008 as a precedent. The Russian parliament is expected to rapidly clear the way next week for Crimea to quickly join the Russian Federation.

Russia used its veto power at the United Nations Security Council to block a draft resolution Saturday that criticized the referendum. Thirteen of the 15 members of the Security Council supported the motion, while China abstained.

"Russia, isolated, alone and wrong, blocked the resolution's passage," said Samantha Power, U.S. ambassador to the UN. "This is a sad and remarkable moment."

A spokesman for Russian President Vladimir Putin said he hoped the crisis in Ukraine wouldn't develop into a renewed Cold War standoff between Moscow and the West.

"With all our soul, we hope that both ourselves and our partners have enough political wisdom, feelings of political realism, to avoid sliding into an even deeper confrontation - ideological or otherwise - because of Ukraine," Dmitry Peskov said in an interview with Russia's Ren-TV. "We are interested in the development of cooperation, and we wouldn't like what is happening in Ukraine to have the opposite effect."

In Moscow, an estimated 50,000 opposition supporters took part in a Peace March at which the Russian and Ukrainian flags were flown side-by-side and protesters chanted for "Russia and Ukraine without Putin." A rival Moscow demonstration condemning the rise of "fascism" in Ukraine drew an estimated 15,000 people.

Globe in Ukraine: In Crimea, the only ‘truth’ is from Kremlin-controlled media
May 12, 2018 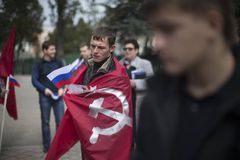 Amid all the turmoil in Kiev, lives are being upended
June 19, 2017
Harper to visit Ukraine next week; first G7 leader to announce such plans
May 12, 2018 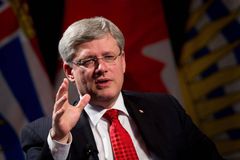 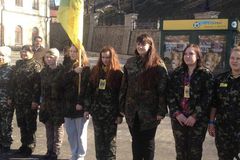 Globe in Ukraine: Pro-Russia vote in Crimea will be ‘intolerable’ for some
May 12, 2018 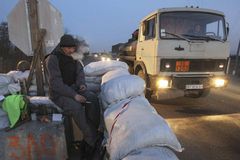