Ukrainian Prime Minister Arseniy Yatsenyuk sat down with The Globe and Mail's senior international correspondent, Mark MacKinnon, on Friday for a wide-ranging interview on the situation in Ukraine. Here are excerpts, edited and condensed for clarity.

First of all I would like to ask you – after what happened in Debaltseve this week – if the Minsk peace process is still valuable, if Ukraine can accept the terms of it, with new line of control?

Let me put it this way, what is the idea or what was the idea of Minsk 2? To have real ceasefire. [Have we] achieved this goal? Apparently Russia is still shooting [at] Ukrainian territory and killing Ukrainian soldiers and innocent people.

What is the Russian idea?

The ultimate goal of Putin is for sure not to make Ukraine a successful state.

Putin's idea is to have Ukraine as a failed state or, I would rephrase, not to have Ukraine as a state at all. He believes that, using the Minsk deal, we as the state of Ukraine will be obliged to legitimize Russian terrorists through so-called local elections. I am just wondering how we can have free and fair elections on the territories that are under entire control of Russian FSB agents and armed guerrillas.

Second, he believes that we, with our own hands … that we will devolve additional, or I would even say unlimited, powers to Russian terrorists granting them to have their own military, their own police, own judges, own prosecutors, actually making their own state. And he believes that this Minsk deal – as Minsk is mainly focused on the touchline [front line] but not on the Ukrainian-Russian border – that we will legitimize the new border between so called DNR [Donetsk People's Republic], LNR [Lugansk People's Republic] and Ukraine, and he thinks as we start the process of constitutional reforms, this is the best way to dismantle Ukraine, through so called federalization or never ending debate in the house or among Ukrainian population of what kind of reforms we should get.

It doesn't sound like you are very happy with Minsk.

Yes, definitely. Absolutely. I am not happy, neither with Minsk nor with the format of talks. I have always reiterate that Americans have to be on board and the U.S. as one of our closest allies – with the support of Canada, the U.K., and other G7 member states – has to play a crucial and important role in this talks. That will make easier for Germany, France and Ukraine to hammer out the right deal. I won't say it's too late to talk about this, but this is not the final stage and I expect that we will have new talks, new rounds and probably new formats of this kind of talks.

In a meantime, do you expect the offensive to continue or do you think there is a willingness…

I have already explained that to you that he will change his tactics; he is a good tactical player so we shouldn't underestimate him.

In these circumstances, there has been a lot of talk about possibilities of martial law being used in Ukraine. Do you think it's a growing possibility or is it not necessary right now?

You know, martial law … it's difficult to stop Russian aggression by imposing just martial law in the country, you need always to have tools in your hands and the best tool is to increase Ukrainian military strength and enhance Ukrainian military capability not just with the thought but defence which is to prevent Russian troops for further intervention as I do not trust that Putin will stop.

When we are talking about increasing defence capabilities what more should countries like Canada be doing toward Ukraine?

First let me praise and I truly commend the efforts of your government, and personally Prime Minister [Stephen] Harper. I've met him a number of times and Canadian people support Ukraine sovereignty and territorial independence, so you stand by Ukrainian people and I truly appreciate that.

We've already received a bunch of humanitarian aid from Canada, starting from the uniforms and ending with medical kits and other stuff which is needed for Ukrainian military.

But Russia is constantly supplying tanks, artillery, long-range Howitzers, surface-to-air missiles, anti-aircraft missiles, electronic equipment and it seems like Russia has unlimited resources for all this military equipment.

For today, the Ukrainian military has what it has: partly this is outdated Soviet equipment, partly this is new personal armed vehicles and tanks, the type we use in Ukraine, but if we compare them with the Russia ones, I mean these [are] not as strong as Russian equipment.

In terms of military technology, in the last decade Russians has spent billions of dollars to modernize their military. While we were trying to reset relationships, while the free world tried to reset relations with Russia, Russia reloaded its military.

The West needs to save Ukraine, PM Yatsenyuk says
February 20, 2015 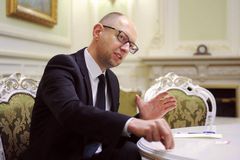