For the thousands of protesters camped out in Kiev's Independence Square, there is a commonly understood rule: stay away from the fifth floor.

Inside the Soviet-era office building that has been seized as a barracks for protest organizers and guards, the fifth floor is blocked, from the moment you attempt to step off the elevator, by a phalanx of grim-faced men in camouflage fatigues, brush cuts and Mohawks, many of them holding iron bars or other improvised weapons. They don't want visitors.

This is the headquarters of Pravy Sektor, or Right Sector, the ultra-right-wing movement, described by some as fascist, whose hundreds of soldiers (they call themselves an army) have become the sharp edge of the two-month-old protest movement that has upturned the politics of Ukraine, cost several lives and forced President Viktor Yanukovych to dismiss the government and promise to reform the constitution.

The great majority of the hundreds of thousands of "EuroMaidan" protesters – who have rallied against Mr. Yanukovych's rejection of a European Union treaty and his moves toward a deal with Russia – appear to be either supporters of conventional, centrist or liberal opposition political parties, or pro-European citizens without much interest in party politics at all.

But the physical organization of these protests, the building of barricades around squares, much of the camp construction and policing, and the pitched and sometimes deadly battles with police are almost entirely the work of the extreme right. In some of Ukraine's smaller cities, the local protests and seizures of government buildings appear to have been entirely the work of Pravy Sektor.

Their highly visible presence has led Mr. Yanukovych to dismiss the protests as the product of "extremism, radicalism and incitement to hatred." While the accusation is largely inaccurate, some protest supporters worry that the very visible and largely uncontrollable far right is giving the pro-European movement a bad name.

Here in Kiev, some members of the ragtag army of pipe-wielding, helmeted marshals and guards say they are supporters of the more mainstream right-wing Ukrainian-nationalist Svoboda (Freedom) party, which won about 10 per cent of the vote in 2012 parliamentary elections and whose leader, Oleh Tyahnybok, has a history of using anti-Semitic insults.

But the people in the largest and most aggressive group, who generally refuse to speak to journalists, are members of Pravy Sektor, an umbrella group of fascist, nationalist, football-hooligan and right-wing extremist gangs – some with neo-Nazi histories – which is generally considered to the right of Svoboda and which tends to be very secretive. It has not, to this point, been a political party.

A senior Pravy Sektor official, in a rare interview, told The Globe and Mail that the admiration his group has won from protesters for its heroic battles with police has led it to consider entering the electoral arena.

"When this revolution is finished, then we will be willing to think about it – if we were able to do so much for the country, then why not? People are disillusioned with the official opposition, and we should be listened to," says Artem Skoropadsky , a slight, mild-looking 32-year-old activist who agreed to an interview, after lengthy negotiations with the people on the fifth floor, over beers at a cellar restaurant.

Pravy Sektor's commander and figurehead is Dmitro Yarosh, a bald-headed, burly militant who rarely speaks. Mr. Skoropadsky describes himself as the group's spokesman, but his language suggests that he has a leadership role. And he chooses to speak in Russian, indicating that he is from eastern Ukraine – which suggests that the group differs from the Ukrainian-nationalist focus of Svoboda, whose membership has sometimes been restricted to ethnic Ukrainians.

While he says Pravy Sektor is right-wing, Christian and intolerant of any foreign influence in Ukraine, he insists that they are not neo-Nazis or fascists and that they condemn outright racism. But keeping extremists out of a self-professed extremist group is, he admits, not always easy. Some Pravy Sektor members have been spotted wearing neo-Nazi symbols.

"Of course, it is difficult to control everyone," he says. "I know one guy who's got '14/88' [a symbol referring to Adolf Hitler's Mein Kampf] painted on his shield. But we're trying to purge them. We are a highly disciplined organization."

Despite their history of extreme intolerance, Pravy Sektor has won the admiration of a surprising number of mainstream protest organizers. "The real extremists are on the government side – some see the Pravy Sektor people as being too extreme, but we need them now," says Andrey Dzyndzya, a founder of AutoMaidan, which started as a car owners' protest group against highway-police corruption and became a major organizing force in the protests. "We need their kind of radicalism to support the revolution."

There is a paradox here, Mr. Skoropadsky acknowledges. The EuroMaidan (literally "Euro Square") protests began as, and continue to be dominated by, a call for closer relations with the EU Union, yet Pravy Sektor's members are opposed to foreign influence and, like many on the far right, distrust Brussels.

"If you ask me which is better, Russia or the EU, I'd go with the EU – Russia is a tyrannical empire," he says. "But we don't think everything's okay with the EU. We are Christians, and we share Christian values, and we don't want the things we see in the EU, such as the idea that gays should have the same rights as everyone."

He would prefer, he says, a "close dialogue and an alliance" with Europe.

Most political experts do not believe Pravy Sektor's popularity would translate into seats in Ukraine, a country that has not traditionally had strong support for the far right.

"Their popularity has been rising only due to public attention," says Volodymyr Fesenko, head of Kiev's Centre for Political Studies. "People support it not because they share its far-right ideology, but because they view it as the opposition's army. Will Pravy Sektor gain if it goes into politics? I don't think so, I even believe that they wouldn't get into parliament."

But Pravy Sektor has loftier ambitions. Its leader, Mr. Yarosh , has boasted of having a cache of weapons sufficient to fight a civil war. His spokesman agrees: "We are an army now, and our group is fully capable of fighting a civil war." 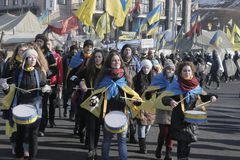