Twenty-one United Nations peacekeepers held by rebels for three days in southern Syria crossed into Jordan on Saturday, after an ordeal which highlighted how Syria's civil war is ratcheting up tensions on its volatile borders.

The Filipino peacekeepers – part of the UN Disengagement Observer Force (UNDOF) that has been monitoring a ceasefire line between Syria and Israel in the Golan Heights since 1974 – were seized by the Martyrs of Yarmouk rebel brigade on Wednesday.

They were taken by the rebels on Saturday to the Jordanian border, about 10 kilometres south of the village of Jamla where they had been held since being captured.

"They are all on the Jordanian side now and they are in good health," said Abu Mahmoud, a rebel who said he had crossed over into Jordan with them.

In the Syrian capital, Mokhtar Lamani, who heads the Damascus office of U.N.-Arab League mediator Lakhdar Brahimi, confirmed that the men had crossed into Jordan.

Jordan appeared surprised by the arrival of the peacekeepers – who had been expected to be retrieved instead by a UN convoy inside Syria and possibly taken to Damascus – and Syria expressed dismay at how they were spirited across the border.

The move would "encourage terrorists to repeat these events," the foreign ministry in Damascus said, adding that Syria had complied fully with its commitment to ensure the peacekeepers' safety.

UN Secretary-General Ban Ki-moon welcomed the release of the peacekeepers but called on "all parties to respect UNDOF's freedom of movement and the safety and security of its personnel," Ban's spokesman said.

The peacekeepers had been held in Jamla, a village one mile east of the Israeli-occupied Golan and 6 miles north of the Jordan border. After their capture insurgents described them as "guests" and said they would be freed once President Bashar al-Assad's forces withdrew from around Jamla and stopped shelling.

A brief truce was agreed on Saturday morning to allow for the peacekeepers' retrieval. Although the two-hour window of that ceasefire passed at midday before they could be extracted, the relative calm prevailed long enough for the rebels to take them south to Jordan, rebels said.

A rescue effort on Friday was delayed by heavy bombardment and abandoned after nightfall, UN peacekeeping chief Herve Ladsous said.

Syria's two-year-old civil war has spilled periodically across the Golan Heights ceasefire line and Syria's borders with Lebanon, Iraq and Turkey, threatening to engulf the region. The conflict began as peaceful protests, but turned violent when Assad ordered a crackdown on the demonstrations.

Ladsous warned on Friday that once the peacekeepers were freed, "we would strongly expect that there would not be retaliatory action by the Syrian armed forces over the village and its civilian population."

Syrian UN Ambassador Bashar Ja'afari said the army had been targeting areas outside Jamla where he said the rebels were concentrated, not the village itself. "We know for sure what we are doing and we know where the peacekeepers are," he said.

"The Syrian government forces are doing exactly what they have to do in order to bring back safely the peacekeepers, guarantee the safety and security of the inhabitants of these villages [and] get these armed group terrorists out of the area."

In several videos released on Thursday, the peacekeepers said they were being treated well by civilians and rebels.

The United Nations said the captives had been detained by about 30 rebel fighters, but Abu Issam Taseel, a Martyrs of Yarmouk activist, said the men were "guests," not hostages, and were being held for their own safety.

Under an agreement brokered by the United States in 1974, Israel and Syria are allowed a limited number of tanks and troops within 20 kilometres of the disengagement line. 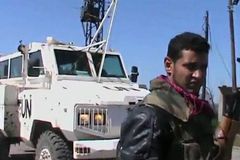 Capture of UN peacekeepers may have long-term consequences
March 8, 2013 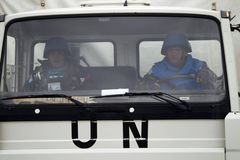