A day after a corruption conviction cast serious doubts on his future, Former Brazilian President Luiz Inacio Lula da Silva insisted on Thursday that he'll be on October's presidential ballot, while also appearing to acknowledge that he could be sidelined.

The comments to high-ranking members of his left-leaning Workers' Party underscored the conundrum facing the party that governed Brazil between 2003 and 2016: Its best chance of winning the presidency rests with da Silva, but the once wildly popular former leader may ultimately be ineligible or even jailed.

His chances of running went down sharply on Wednesday when an appellate court upheld a graft conviction against him and even increased the sentence to more than 12 years.

"I hope this candidacy does not depend on Lula," the former leader told Thursday's meeting, hinting that others in the Workers' Party must be ready to carry forward its vision for the country. "You have to put the Brazilian people in motion."

Party stalwarts at Thursday's meeting doubled down on their insistence that da Silva will run and that nobody is entertaining alternatives.

"There is no plan B to Lula's candidacy," said party chairwoman Gleisi Hoffmann. "Lula is plan A to Z."

A few hundred members symbolically voted in favour of da Silva's candidacy and the party intends to register him on Aug. 15, the last day to do so. Many members expressed interest in registering da Silva even if he is in jail.

But neither politician comes anywhere close to da Silva in preference polls.

"We have Pele on our team and 15 matches to the final," said former Health Minister Alexandre Padilha, referring to the former soccer star. "No one here thinks we should leave Pele out just in case a defender wants to kick him off the pitch after five matches."

Under Brazilian law, a criminal conviction that has been upheld on appeal makes the person ineligible to run for office, although da Silva still has several avenues to get on the ballot by appealing to higher courts. Ultimately, the country's Supreme Electoral Tribunal makes decisions about candidacies, and the Supreme Court could also weigh in on the case.

Da Silva, president from 2003 to 2010, has been leading in polls, often describes his legal troubles as an elitist plot to get him out of the race. On Thursday, he called his corruption and money laundering conviction "the works of a cartel."

Prosecutors say that as president da Silva traded favours with construction company OAS in return for the promise of a beachfront apartment. He argues never bought it, had the keys to it or spent a night there.

It is just one of a series of graft allegations against him amid a mushrooming corruption scandal that has taken down top politicians and business executives in Latin America's largest nation.

On Thursday, da Silva cancelled a trip to Africa after a judge ordered federal police to seize his passport hours before the trip. The passport order was issued in relation to a criminal case against da Silva alleging influence peddling. It did not involve Wednesday's decision by an appeals court.

Oscar Vilhena Vieira, dean of the law school at Fundacao Getulio Vargas university, said da Silva would most likely eventually be barred from running, but maybe not until weeks before the election.

"We will have a difficult year, but I think in the end the election will take place and people will accept its results," he said. 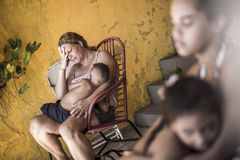