Republican Mayor Jim Brainard from conservative Carmel, Ind., will travel to Bonn next week to deliver a blunt message to the world: that many American cities, states and businesses remain committed to the Paris climate accord despite President Donald Trump's decision to pull the United States out of the climate-change deal.

American negotiators at the two-week United Nations' climate summit, which starts Monday in Bonn, Germany, will reflect the Trump administration's position on climate change – touting the benefits of coal, oil and natural gas, and questioning the broad consensus of climate science.

That position was undercut last week by the administration's release of its Climate Science Special Report, a compendious document that pulls together the most recent climate science and concludes human activity is extremely likely to be the dominant cause of the steady increase in global temperatures since the mid-20th century. The report warns that rising oceans will inundate coastal communities while extreme temperatures, while precipitation will occur with increasing frequency throughout the United States, with a high likelihood of devastating droughts and hurricanes.

Some observers worried Mr. Trump's retreat from Paris would prompt other countries to second-guess their commitments. But that has not happened, said David Waskow of the Washington-based World Resources Institute. Instead, the European Union, China and Canada are stepping into the breach. The United States, meanwhile, stands alone with Syria in failing to support the Paris agreement. Mr. Waskow noted leaders at G7 and G20 meetings, except Mr. Trump, fully endorsed Paris this summer.

Outside of Washington, there is considerable support for climate-change policies, even among Republicans.

Mr. Brainard, the Carmel mayor, will be part of an unofficial American delegation in Bonn being organized around groups such as the We Are Still In coalition, which represents 2,500 mayors, governors, university presidents and other civic leaders that have all committed to the Paris deal.

In Bonn, they aim to reassure world leaders that, despite the administration's position, there is bipartisan commitment in the country to address global warming. Mr. Brainard hails from Vice-President Mike Pence's home state of Indiana; his city council is Republican and his county voted 56 per cent in favour of Mr. Trump in the 2016 presidential election. But the city has committed to become carbon neutral by 2050.

"When 99 per cent of the world's scientists say we have a problem, wouldn't you think the conservative approach would be to assume that they're right and not recklessly go off and disregard all their findings?" the mayor said in an interview before departing for Germany.

"The President talks about being a great country. A great country keeps their word; we gave our word two years ago in Paris. A great country pays attention to their scientists and plan for contingencies. We need to assume the scientists are right; we're already seeing the impacts of changed weather. Whether we can do anything about it, we don't know yet but we certainly need to try."

Carmel is re-engineering its city to reduce car use and smooth out traffic patterns, is planning to introduce electric vehicles to its city fleet and is exploring the possibility of using geothermal energy for its buildings. Its efforts are being mirrored across the country as cities, states and businesses commit to reduce GHG emissions.

The We Are Still In coalition was founded by former New York mayor Michael Bloomberg and California Governor Jerry Brown in the aftermath of Mr. Trump's formal notice in June that the United States would withdraw from Paris in three years. It includes nine states and 252 cities and counties, including major cities in deeply Republican states such as Kansas, Georgia and Texas. Corporate members include Wal-Mart Stores Inc., Target Corp., Nestlé SA, Apple Inc. and Google Inc.

They are partnering with America's Pledge, which will quantify the emission-reduction actions taken by the We Are Still In members, and issue a full report at next year's UN conference.

The coalition "is transitioning from a response to a political decision into a network and movement of leaders who are taking new action to ramp up the climate response given what's happening in Washington," said Lou Leonard, senior vice-president for World Wildlife Fund, one of the 25 organizations driving We Are Still In.

While global politics will be on display on the sidelines of the Bonn meeting, negotiators will focus on implementing the Paris accord, including establishing rules for transparency and accountability regarding countries' emission-reduction commitments.

They will also grapple with the expectation that all countries will have to increase their ambition for emissions reductions beyond what was pledged at Paris. The United Nations reported last week that even if all those commitments were met, average global temperatures would increase by 3 degrees Celsius above preindustrial level by the end of the century, with catastrophic impact. 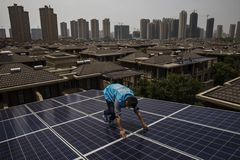 U.S. will not seek Paris Accord revamp amid 34 countries' call to action on climate change
September 16, 2017 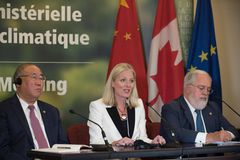