Barack Obama has sent U.S. warplanes back into Iraqi skies and put the boots of a few hundred elite troops on the ground, but before the President will order air strikes against Sunni separatist militants, he wants a new, inclusive government in Baghdad.

That could take months, giving insurgents led by extremist jihadis of the Islamic State of Iraq and the Levant (ISIL) lots of time to consolidate control over a huge swath of traditional Sunni lands stretching across northern and western Iraq into Syria.

(What is ISIL and what do they want in Iraq? Read The Globe's easy explanation)

U.S. Secretary of State John Kerry's pleas in Baghdad for political factions to quickly come together have so far been ignored. "This is a critical moment for Iraq's future," he said. "It's a moment of great urgency."

Instead, Iraqi's newly elected parliament will convene on July 1. It then has 30 days to pick a president, who has up to 15 days more to ask the leader of the largest bloc – in this case, current Prime Minister Nouri al-Maliki – to form a government. Another 30 days is set aside for that process, which must then be approved by a majority in the 328-seat parliament.

Even if those constitutional deadlines are met – and in 2010, the process took nine months of bitter political wrangling – it could be as long as mid-September before a new Iraqi government is in place.

Mr. Obama has not called directly for Mr. al-Maliki to quit.

"It's not our job to choose Iraq's leaders," the President said, though he left little doubt about his preference. "It is clear, though, that only leaders that can govern with an inclusive agenda are going to be able to truly bring the Iraqi people together and help them through this crisis."

Mr. Kerry apparently told Mr. al-Maliki as much this week and made it clear that U.S. military support was conditional on a broadly inclusive government being in place in Baghdad. "Support will be intense, sustained, and if Iraq's leaders take the necessary steps to bring the country together, it will be effective," he said.

But with Mr. al-Maliki flatly ruling out calls for a multiparty national-unity government to be formed immediately, political wrangling in Baghdad could mean entrenchment by military force of a division of Sunni and Shia lands across much of Iraq.

"The call to form a national salvation government represents a coup against the constitution and the political process," said Mr. al-Maliki, a 64-year-old Shia Islamist, who so far shows no signs of stepping aside despite international pressure and the widespread distrust of both Sunni and Kurdish minorities.

U.S. warplanes flying from the carrier USS George H.W. Bush in the Persian Gulf are mapping ISIL targets, but if Mr. Obama waits until a new government is in place in Baghdad, it could be months before reconnaissance sorties turn into air strikes.

Iraq has no fighter-bombers, only helicopters, but Syrian warplanes attacked ISIL fighters inside Iraq this week – underscoring the grave risks of a wider war as embattled leaders in both Baghdad and Damascus face violent Sunni insurgencies.

The White House, clearly uncomfortable at being on the same side – militarily – as Syria's pariah President Bashar al-Assad, decried the attacks on the ISIL. "The solution to the threat confronting Iraq is not the intervention of the Assad regime," Mr. Obama's spokesman, Josh Earnest, said, adding: "The solution to Iraq's security challenge does not involve militias or the murderous Assad regime, but the strengthening of the Iraqi security forces."

But that, too, could take months or longer. Major units of Iraq's army of one million soldiers, trained and equipped by the United States at huge cost, have collapsed and fled in disarray over past few weeks. Years of politicization under Mr. al-Maliki have turned the once integrated Iraqi army into a corrupt and uniformed rabble derisively dubbed Maliki's militia by many Sunnis.

The primary U.S. policy objective is that Iraq doesn't fragment – Balkan-style – in a bloody civil war that displaces millions and results in successor states along sectarian lines. But with a nascent Kurdistan already in existence and its peshmerga forces now in control of the oil centre of Kirkuk, it may be too late to prevent a Sunni-Shia divide hardening into separate states as Iraq disintegrates.

Visiting Israeli President Shimon Peres, 90, told Mr. Obama as much at the White House for his last official visit this week.

"The best thing that could have happened was that Iraq remains a united country, but … you need … a mighty army to force all the three parties together. I don't see the army to do it and I don't see the parties that will agree to it," the Israeli statesman said. 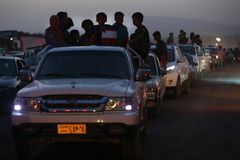