U.S. Attorney-General Eric Holder was found in contempt of Congress on Thursday as the Republican-controlled House of Representatives reprimanded the nation's top law-enforcement official for withholding some documents related to a failed gun-running probe.

The mostly partisan vote of 255-67 marked the first time a sitting attorney-general and presidential Cabinet member was cited for contempt by the full House. No Senate vote is necessary in this House contempt citation.

Many Democrats refused to cast votes, and Democratic Leader Nancy Pelosi led many of her colleagues in a walkout from the House floor in protest.

Later in the day, the House also was scheduled to vote on a resolution asking U.S. courts to force Mr. Holder to turn over documents being sought by the House Oversight and Government Reform Committee as part of its long-running investigation of Operation Fast and Furious. That could lead to a prolonged court fight with an uncertain outcome while a judge weighed the House demand against the Obama administration's claim of executive privilege to protect the documents.

The unprecedented House rebuke of Mr. Holder was overshadowed by the U.S. Supreme Court's upholding of Democratic President Barack Obama's controversial health-care law – a ruling that was reverberating throughout the country.

Nevertheless, the House devoted much of its legislative session on Thursday to a sometimes bitter debate over Mr. Holder's role in Fast and Furious, which was aimed at following guns being purchased in Arizona to determine whether they flowed into Mexico for use by drug cartels.

The Justice Department initially denied that a program was being run that allowed some guns to "walk" into Mexico – a contention it later retracted, raising Republican suspicions.

According to government figures, between 2007-2011, of 99,000 firearms recovered in Mexico and submitted to U.S. law enforcement, more than 68,000 came from the United States. In recent years, those weapons have shifted more and more from handguns to high-powered rifles.

By early 2011, Fast and Furious had been terminated after disclosures that federal agents had lost track of many of the high-powered weapons, which subsequently were traced to crimes, including the murder of a U.S. Border Patrol agent.

House Republicans and Democrats have engaged in arguments all year over issues ranging from budget and taxes to contraceptives. Thursday's debate was no exception.

Mr. Issa added the contempt vote was being held "because when we asked legitimate questions … about Fast and Furious, we were lied to. We were lied to repeatedly and over a 10-month period."

"This is something that makes a witch hunt look like a day at the beach," Ms. Pelosi told reporters. "It is a railroading of a [contempt] resolution that is unsubstantiated by the facts."

The tussle between the Obama administration and House Republicans is over the release of a series of documents dating from Feb. 4, 2011, when the Justice Department initially denied that guns were being allowed to "walk" into Mexico.

The high-stakes fight could jeopardize the jobs of some top Justice Department officials if Congress ultimately finds that they were hiding some important information related to Fast and Furious.

Conversely, Republicans could be embarrassed if nothing turns up and they devoted so much time and energy amid the need to help the struggling U.S. economy – the top priority of voters in the run-up to the Nov. 6 presidential and congressional elections.

The National Rifle Association, a powerful lobbying organization that opposes gun regulation, has made the Holder contempt move a top priority. It has warned all 435 House members that a vote against the contempt citation would be a black mark against them.

The NRA has argued that Fast and Furious was actually a back-door move by the Obama administration to lay the ground for new gun regulations by the Bureau of Alcohol, Tobacco, Firearms and Explosives, which ran the southwest border gun-running investigation.

Obama administration officials point out that the Justice Department already has released more than 7,000 documents to Mr. Issa's committee and that they showed that top officials in Washington initially knew little about Fast and Furious, which was hatched by law enforcement officials in Arizona.

House Democrats, meanwhile, have complained that Mr. Issa has rejected their calls to investigate Bush-administration gun probes similar to Fast and Furious.

The fight between Republicans and Holder escalated last week, after the White House exerted "executive privilege" over the post-Feb. 4, 2011, documents, saying they were protected communications that any administration needs as part of its deliberative process.

While contempt of Congress charges generally are aimed at forcing officials to produce information to Congress, legal experts point out that they are very hard to enforce and the action could bring months or years of litigation and stalemate. 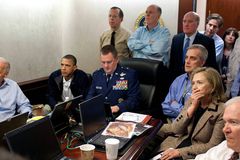