The Northeast is bracing for its third nor'easter in less than two weeks, while some people are still feeling the effects of the last storm that dumped more than 2 feet of snow in some areas and left hundreds of thousands of customers without power.

A southern storm is expected to make its way up the coast, causing more snowfall this week, the National Weather Service said on Sunday.

The Boston area is expected to get 6 to 9 inches, while southern Maine could see almost 18 inches by Wednesday.

New York could get 4 to 6 inches of snow and Philadelphia could see a few inches by Tuesday's morning commute.

Eight inches could fall in West Virginia and 4 inches is expected in Kentucky.

A winter storm watch is in effect for most of New England, parts of New York and Virginia.

Alexandra Soto, of Bushkill, Pennsylvania, said she was not looking forward to the next storm. Her home lost power during the first nor'easter on March 2 and the lights did not come back on until Saturday, well after the second storm.

"I'm hoping they have enough crews to deal with whatever happens and that they took some proactive measures so that next time, they don't have to be reactive," Soto said. "Frankly, I'm hoping this next storm just misses us, because I don't think I could take another."

The risk for coastal flooding is expected to be lower than the last nor'easter, which flooded much of Cape Cod and seaside towns.

Massachusetts officials said 2,700 customers remained without power on Sunday. Thousands more across southern New England also remained without electricity as they prepared for the third nor'easter in 12 days.

"It doesn't happen very often, I'll say that. It's not like it hasn't happened before, but it's rare," said Joe Miketta a meteorologist with the National Weather Service. 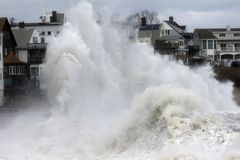