In a U.S. presidential election that has already seen all manner of violence, discord and flabbergasting upsets (with the actual election still months away), something new is happening: For the first time in a long time, both the primaries and the presidential election might come down to more than just a handful of swing states.

On Tuesday, voters in Wisconsin will go to the polls to vote in the Democratic and Republican primaries. In the process, the state will award fewer than 100 Democratic delegates and fewer than 50 Republican ones. Numbers-wise, the state is not particularly significant (2,383 delegates are needed to clinch the Democratic nomination; 1,237 for the Republican one). And yet, Wisconsin will be the subject of intense scrutiny, the outcome of its races potentially pivotal.

The reason is narrative. In both the Democratic and Republican contests, Wisconsin is expected to go to the underdog, recent polls predict. Both Ted Cruz and Bernie Sanders are leading in the state. Should they win by significant margins, both candidates can more forcefully claim that the nomination process is far from a foregone conclusion.

In many ways (some of them downright frightening), the 2016 election is unlike any American presidential election in recent memory. On the Democratic side, a nomination process once expected to be a coronation for Hillary Clinton has suddenly turned into a surprisingly tight contest thanks to the energized Sanders campaign. And on the Republican side, the rise of Donald Trump has reduced the process into a hybrid of political fratricide and farce, threatening the very fabric of the conservative machine.

The result is a kind of unpredictability that makes it very alluring for all remaining candidates to stick around until the bitter end – the end being the parties' national conventions in July. Mr. Trump, the Republican front-runner, suddenly appears particularly vulnerable, lagging in recent polls and under attack from a Republican Party whose leaders openly loathe him.

And while Ms. Clinton is still the clear Democratic front-runner, she has suffered several stinging defeats at the hands of Mr. Sanders, including outright blowouts in states such as Alaska and Washington. Indeed, some of Mr. Sanders's supporters hope that, should the Vermont senator rack up enough wins to lead in the delegate count heading into the convention, many of the so-called superdelegates who have already pledged to support Ms. Clinton can be pressured to change their affiliation so as to reflect the will of the rank-and-file Democratic voters.

As such, all the signs point to a race in which late-voting primary states such as Kentucky and Oregon in May or even the Dakotas in June might have a louder-than-normal voice in electing the presidential nominees.

But beyond the nomination process, the presidential election itself promises to be just as unpredictable. Since Ronald Reagan demolished Democratic challenger Walter Mondale in 1984, 49 states to one, presidential races have become increasingly tighter, often determined by a handful of swing states, such as Florida and Ohio.

This time around, however, a whole host of states that are usually predictable might be up for grabs. The reason is simple: In terms of overall perception by the American voting public, both parties' front-runners are wildly, almost historically, unpopular.

A recent New York Times survey found that Mr. Trump's overall favourability ratings heading into the general election are substantially lower than any major party candidate's in more than 30 years. His ratings are particularly low among independents, women and non-white voters. The results are so bad that, should he become the nominee, some long-standing Red states are projected to possibly go Blue.

However the same survey found that the candidate with the second-worst favourability numbers during the same time period is Ms. Clinton, the Democratic nominee.

Even though Ms. Clinton does better than Mr. Trump in many metrics, and is projected to beat him handily in several key states, her overall cool reception from the general electorate, coupled with Mr. Trump's dismal lack of popularity among all but his fervent base, means anything could happen between now and the end of the year.

Spurred by what they feel might be a victory for the traditional party machine over a truly progressive candidate, many Sanders supporters could refuse to line up behind Ms. Clinton. The Democratic front-runner also fares significantly worse against the other Republican nominees, Mr. Cruz and John Kasich, either of whom may still win the Republican nomination in a contested convention.

On the Republican side, the situation is even more dire: Should Mr. Trump lose the nomination, a sizable portion of his supporters might turn on the party outright, possibly persuading Mr. Trump to launch a third-party bid. Such a scenario – a chaotic three-candidate slugfest – would perhaps be a fitting conclusion to an election campaign that has so far mystified and shocked the world. 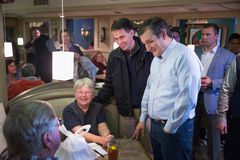 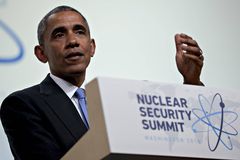