U.S. President Barack Obama warned Syrian President Bashar al-Assad on Monday that U.S. forces could move against him, notably if he deployed his chemical weapons against rebels trying to overthrow him.

In some of his strongest language yet on Syria, on a day when UN observers pulled out after a fruitless bid for peace and Mr. al-Assad's forces mounted new attacks, the U.S. leader said Mr. al-Assad faced "enormous consequences" if he crossed a "red line" of even moving unconventional weapons in a threatening manner.

Seeking re-election in November, Mr. Obama noted that he had refrained "at this point" from ordering U.S. military engagement in Syria. But when he was asked at a news conference whether he might deploy U.S. forces, possibly to secure Syrian chemical and biological weapons, he said he could change his view.

"We have been very clear to the Assad regime, but also to other players on the ground, that a red line for us is we start seeing a whole bunch of chemical weapons moving around or being utilized," Mr. Obama said. "That would change my calculus."

"We cannot have a situation where chemical or biological weapons are falling into the hands of the wrong people," Mr. Obama told an impromptu White House news conference. He acknowledged he was not "absolutely confident" the stockpile was secure.

Calling again for Mr. al-Assad to step aside to allow a democratic transition but conceding that prospects for a "soft landing" to the conflict were dim, Mr. Obama said the weapons worried not only Washington but also its allies in the region, including Israel.

Mr. Obama has been reluctant to get the United States involved in another war in the Middle East, and refuses to arm rebels fighting a 17-month-old uprising against Mr. al-Assad, partly out of concern that some of those fighting against the Iranian-backed president are Islamist radicals equally hostile to the West.

However, Mr. Obama said, Mr. al-Assad should quit: "The international community has sent a clear message that rather than drag his country into civil war, he should move in the direction of a political transition," Mr. Obama said. "But at this point, the likelihood of a soft landing seems pretty distant."

Syria last month acknowledged for the first time that it had chemical and biological weapons and said it could use them if foreign countries intervene – a threat that drew strong warnings from Washington and its allies. Western countries and Israel have expressed fears chemical weapons could fall into the hands of militant groups hostile to them as Assad's authority erodes.

"We're monitoring that situation very carefully. We have put together a range of contingency plans," Mr. Obama said when asked whether he envisioned the possibility of using U.S. forces at least to safeguard Syria's chemical arsenal.

The U.S.-based Global Security website says there are four suspected chemical weapons sites in Syria: north of Damascus, near Homs, in Hama and near the Mediterranean port of Latakia.

Weapons Syria produces include the nerve agents VX, sarin and tabun, it said, without citing its sources.

Fighting raged on around Syria, killing some 120 people on Monday, the Syrian Observatory for Human Rights said.

U.N. military observers left Damascus on Monday after a four-month mission during which they became helpless spectators of Syria's conflict, and activists said government forces launched air strikes near the capital that killed two dozen people.

Helicopter gunships attacked Mouadamiya and Daraya, suburbs south of Damascus, activists and residents said, giving casualty tolls that could not be independently verified.

The rebel Free Syrian Army also said rocket-firing helicopters and troops attacked their positions at Qastal Maaf, near the Turkish border, in an apparent bid to retake the town.

The UN representatives blamed both sides for the failure of a truce brokered by outgoing special envoy Kofi Annan to hold: "Our mission failed because the two sides did not abide by their commitments," said one uniformed observer, who declined to be named, before seven UN cars left a Damascus hotel carrying some of the last members of a mission once 300 strong.

The unarmed monitors suspended operations in June after coming under fire and most have already departed, leaving a small liaison office in the Syrian capital in case a chance for a political settlement to the bloodshed ever emerges.

At least 18,000 people have now been killed since the revolt began. At least 170,000 have fled the country, according to the United Nations, and 2.5 million need aid inside Syria.

Rebel fighters have complained that foreign powers have supplied neither the quantity or quality of weaponry they need to defeat Mr. al-Assad, such as anti-aircraft missiles.

France, which like the United States and Britain, says it is supplying only non-lethal assistance to the Syrian opposition, ruled out providing arms in case they fell into the wrong hands.

Russian Deputy Foreign Minister Gennady Gatilov, whose country is an ally of Syria, said evidence had grown that Syrian rebels were "massively supplied with Western-made weapons."

While outgunned by Mr. al-Assad's forces, rebels still managed to seize control of districts in Damascus and Aleppo last month, as well as several border crossings and parts of the north, before the army counter-attacked in Syria's two main cities.

With diplomatic efforts to end the war stymied by divisions between world powers and regional rivalries, Syria faces the prospect of a prolonged conflict that increasingly sets a mainly Sunni Muslim opposition against Mr. al-Assad's Alawite minority.

The United Nations may need to create a "safe zone" within Syria to cope with a swelling exodus of refugees, Turkish Foreign Minister Ahmet Davutoglu, whose country already hosts nearly 70,000 Syrians, told the Hurriyet newspaper.

Splits in the UN Security Council pose a major obstacle to the creation of any such UN safe haven, which would need robust military protection unless Damascus gave its consent.

Only the Security Council can authorise the use of force against Syria, Russian Foreign Minister Sergei Lavrov said, warning against imposing "democracy by bombs."

Algerian diplomat Lakhdar Brahimi has been appointed as the new international envoy for Syria, replacing Mr. Annan, who steps down at the end of the month and who had said Assad must quit.

Mr. Brahimi met French President François Hollande in Paris on Monday, his first talks with a foreign leader since taking up the post last week. "I am in listening mode," Mr. Brahimi said. 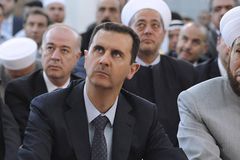 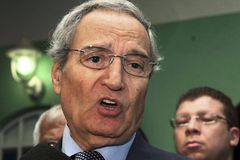 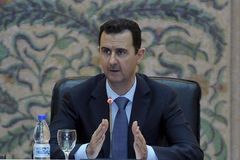