Republicans in the House of Representatives have nominated Wisconsin Republican Rep. Paul Ryan to become the chamber's next speaker, hoping he can lead them out of weeks of disarray and point them toward accomplishments they can highlight in next year's elections.

The 45-year-old Ryan was his party's 2012 vice-presidential nominee and is considered a telegenic spokesman for conservative priorities.

Ryan won on a secret ballot of the House's 247 Republicans.

Current speaker John Boehner, unexpectedly announced his resignation last month. He came under pressure from hardline conservatives who considered him too timid in challenging President Barack Obama and too autocratic in punishing Republican lawmakers who defied him.

The full House is expected to elect Ryan as speaker on Thursday.

As that vote took place, bipartisan leaders pushed a two-year budget truce toward approval in the House.

Both milestones Republican leaders hope will transform their party's recent chaos into calm before next year's presidential and congressional campaigns.

Democratic and Republican leaders urged lawmakers to back the budget agreement, which would resolve fights over both military and domestic spending as well as federal borrowing until early 2017. Expectations were for House passage Wednesday and final Senate approval by next week, even as hard-right conservatives and farm-state lawmakers arrayed against the deal.

Hours before the vote, Ryan said he would support the bill because it makes "meaningful reforms" that strengthen safety net programs like Social Security and provides sufficient resources for the military.

"What has been produced will go a long way toward relieving the uncertainty hanging over us," Ryan said in a written statement.

At a Wednesday morning closed-door meeting, Ryan had told House Republicans what he won't do as speaker. "I don't plan to be Caesar, calling all the shots around here," Rep. Matt Salmon reported after the session.

That seemed to be a reference to demands hardline conservatives have made to transfer more power over legislation from House leaders to rank-and-file lawmakers. Those conservatives have said the secret negotiations by which leaders crafted the budget deal typified departing Boehner's top-down approach to legislating, and Ryan said Tuesday that that process "stinks."

President Barack Obama praised the budget deal and urged both parties to "come together to pass the agreement without delay." House Minority Leader Nancy Pelosi, said the pact upholds Democratic priorities and told reporters, "We'll have enough votes" to ensure its passage.

Boehner was pivotal in crafting the agreement, which amounts to a valedictory legislative prize for his supporters and a whack at his conservative House nemeses. The quarter-century House veteran serves his final day in Congress on Friday, driven into retirement by rebellious Republican hardliners who scorned his penchant for compromise with Obama and Democrats.

Without the legislation, the government could lapse into an economy-jolting default next week. A partial federal shutdown would occur without action by Dec. 11.

The unyielding conservatives who comprise the House Freedom Caucus announced their opposition to the budget deal Wednesday, though the measure seemed likely to pass with support from scores of Republicans and most Democrats. The conservatives criticized the agreement as a backroom deal that surrendered too much to Obama.

The agreement would provide an extra $80 billion, divided evenly between the Pentagon and domestic agencies over the next two years, and extend the government's authority to borrow to pay bills into March 2017, as Obama's successor settles into the White House. 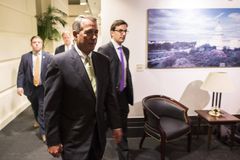