On a sweltering Washington summer day, President Donald Trump's motorcade pulled up to the Pentagon for a meeting largely billed as a briefing on the Afghanistan conflict and the fight against the Islamic State group.

There, in the windowless meeting room known as "The Tank", Trump was to be briefed on the state of America's longest-running war as he and his top aides plotted ways ahead. But, according to current and former U.S. officials familiar with the meeting, it was, in reality, about much more.

Trump's national security team had become alarmed by the president's frequent questioning about the value of a robust American presence around the world. When briefed on the diplomatic, military and intelligence posts, the new president would often cast doubt on the need for all the resources. Defence Secretary Jim Mattis and Secretary of State Rex Tillerson organized the July 20 session to lay out the case for maintaining far-flung outposts – and to present it, using charts and maps, in a way the businessman-turned-politician would appreciate.

The session was, in effect, American Power 101 and the student was the man working the levers. It was part of the ongoing education of a president who arrived at the White House with no experience in the military or government and brought with him advisers deeply skeptical of what they labeled the "globalist" worldview. In co-ordinated efforts and quiet conversations, some of Trump's aides have worked for months to counter that view, hoping the president can be persuaded to maintain – if not expand – the American footprint and influence abroad.

The result of the meeting and other similar entreaties may start to become clear this week, as Trump heads to New York for his first address to the United Nations General Assembly. The annual gathering of world leaders will open amid serious concerns about Trump's priorities, his support for the body he is addressing and a series of spiraling global crises.

Trump, who seized as his mantra "America First" and at times unnerved world leaders with his unpredictability, is expected to offer warmth to the United States' allies and warnings to its adversaries, particularly North Korea and Iran. The president's envoy to the global body suggested a presidential message that would focus on the basics on America's role in the world.

In the weeks since the briefing in the Tank, Trump has split with top adviser Steve Bannon, the engine of many of his nationalist, isolationist policies. He threatened war with North Korea and agreed to send more U.S. troops to Afghanistan, abandoning his promise to withdraw quickly. Announcing the plan, Trump acknowledged the influence of his advisers.

"My original instinct was to pull out – and, historically, I like following my instincts," he said. "But all my life I've heard that decisions are much different when you sit behind the desk in the Oval Office; in other words, when you're President of the United States. So I studied Afghanistan in great detail and from every conceivable angle."

On July 20, Trump, Bannon, then-White House chief of staff Reince Priebus, senior adviser Jared Kushner and others stepped from the presidential motorcade and filed down a corridor adorned with formal portraits of former joint chiefs chairmen and into Room 2E924, identified by a small, unobtrusive plaque as "The Tank," to join Vice-President Mike Pence, Mattis and Tillerson as well as a host of briefers.

Armed with charts, maps and diagrams, those briefers spent the next roughly 90 minutes explaining to Trump the critical importance of forward worldwide deployments of U.S. military, intelligence and diplomatic assets, according to two current officials and one former official familiar with the meeting. While the war in Afghanistan and against the Islamic State group in Syria and Iraq were major topics, the stationing of U.S. personnel in Asia, Africa, Europe and Latin America were also covered, said the officials who were not authorized to discuss details of the highly classified briefing and spoke on condition of anonymity.

The officials said the purpose was to answer one of Trump's most persistent questions of his national security aides: Why does the U.S. government need "so many people" abroad? As such, it was a comprehensive look at military bases, embassies and consulates, CIA stations and other intelligence posts, presented by experts sitting around a large conference table and in chairs lining the walls.

To be successful, Mattis and Tillerson decided they should use talking points and commentary with which they believed Trump would be most familiar: the role that the military, intelligence officers and diplomats play in making the world safe for American businesses, like The Trump Organization, to operate and expand abroad. American troops provide stability, diplomats push rule of law and anti-corruption measures and the intelligence community provides context and analysis that drive the first two, the briefers explained, according to the officials.

The implications of American retrenchment in an age of increasing international competition were also discussed, the officials said. One chart presented included two maps depicting the exponential growth of China's presence in Africa over the past two decades and its impact on U.S. national security and private foreign investment, according to the officials.

Trump emerged and declared it a "very good meeting."

As a student, Trump is known to be alternatively eager and easily distracted.

CIA chief Mike Pompeo has called Trump both an "avid" and "voracious" consumer of intelligence. Director of National Intelligence Dan Coats, speaking just a day after the Pentagon meeting, told an audience at the Aspen Security Forum that Trump interrupted briefings so often that he and his team frequently needed to circle back to their main points multiple times.

"What we found is someone who has not been in government, not been in the intelligence business, not having relationship to that, but is asking an awful lot of questions and a lot of them were good questions," he said.

White House aides have readied a crash course for Trump as he prepares for the General Assembly, in part necessitated because the president has delayed some of his preparations, choosing instead to focus on the federal government's response to a pair of massive hurricanes and, to a lesser extent in recent days, his dealings with Democrats on immigration issues, according to the officials and advisers. 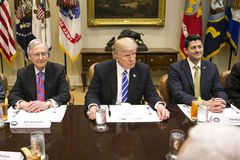 What Russians think of Donald Trump is becoming a problem for Vladimir Putin
November 12, 2017 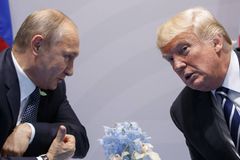