Mitt Romney moves with the short and earnest steps of a military cadet. His gait settings do not include swagger. But if they did, he might just be strutting a bit right now.

Despite the odds and a campaign strategy that seemed to invite disaster, the Republican nominee is within reach of the Oval Office. Few believed he could recover from his "47 per cent" blunder. After he practically took a blood oath with the Tea Party to win his primary, few thought he could pivot credibly to the centre in the final stretch.

Yet, here he is, tied with President Barack Obama in the polls and with a favourability rating that tops that of The One who swept the country four years ago. Mr. Romney is still the underdog, and more so after Hurricane Sandy. But he could actually win on Tuesday because of developments that seemed implausible just a few months ago.

The first Mormon on a presidential ticket is set to do as well among evangelical voters as George W. Bush, an extraordinary feat considering the Christian right had long deemed Mr. Romney's religion a cult. And according to the polls, he is winning over the independent voters like no Republican since Ronald Reagan.

The sudden prospect of a Romney presidency has lobbyists and policy wonks pumping out memos on how he might govern. Would he "reach across the aisle" as he vows at every campaign stop now, usurping the mantle of bipartisanship from Mr. Obama to fix the fiscal mess? Or could he only dance with the Tea Party types that brought him?

It is not clear the shape-shifting Republican nominee himself knows.

Willard Mitt Romney has said he did not think about the presidency until halfway through his term as Massachusetts governor. But as the favoured son of a Michigan governor who once ran for the Oval Office, and whose humiliation the son long sought to avenge, it is unlikely the idea just popped into his head in 2004.

In every way, his life seems to have been scripted for a presidential run – though perhaps one more culturally in tune with the Eisenhower era than the 21st century. As a clean-cut university student, he protested the anti-war protesters. As a Mormon bishop, he epitomized neighbourly kindness and generosity. His pretty wife and perfect progeny complete the tableau of stability and wholesomeness.

Mr. Romney excelled at business. He started out with much but made it into so much more, becoming perhaps the wealthiest presidential nominee yet. He engaged in an especially bloodless form of capitalism – private equity – that purported to make bad companies better but often just sucked dividends from them before letting them die. He did concede, however, that their demise made him "sick at heart."

Mr. Romney took on Ted Kennedy for a seat in the Senate in 1994, tasting the unfamiliar vinegar of defeat. He "saved" the scandal-plagued Salt Lake City Olympics and crafted a centrist image to become the Republican governor of one of the country's most liberal states.

"I'm not a partisan Republican," Mr. Romney said in 2002. "I'm someone who is moderate, and my views are progressive."

And he walked the walk. He stood up for a woman's right to choose. He stood before a coal-fired electricity station in Boston Harbor and said: "That plant kills people." He passed universal health-care legislation that became the model for Mr. Obama's federal law.

But when he sought the Republican nomination, he was suddenly a "severely conservative" former governor who favoured a Supreme Court ban on abortion and the repeal of Obamacare. He pledged to never, ever raise taxes and vowed to fight attempts to "take God out of the public square."

White evangelicals, many of whom stayed home in 2008 when John McCain was the nominee, warmed unexpectedly to the Mormon Mitt.

"He has been able to convince them that, while he does not share their theology, he shares their values," says Gary Marx, executive director of the Faith & Freedom Coalition, which is mobilizing 17 million evangelicals in swing states for Mr. Romney.

Mr. Romney found the sweet spot in his first debate against Mr. Obama. He persuaded enough voters in the centre of his moderation without denting his support among the Republican base. That he could pull it off speaks to the underlying dissatisfaction of swing voters with Mr. Obama.

One of the constituencies – the swing voters leaning toward Mr. Romney or the Republican base – is in for a rude awakening if he becomes president.

Some centre-right thinkers, such as David Brooks of The New York Times, believe a President Romney would turn his back on the Tea Party to do a budget deal – by far the most pressing issue facing whoever wins on Nov. 6 – that reforms entitlement programs such as Medicare while raising taxes on the rich. They see in Mr. Romney the proven problem-solving pragmatist that Mr. Obama never quite managed to become.

And indeed, Mr. Romney, of late, has fed into this idea.

"My legislature [in Massachusetts] was 85 per cent Democrat. And you know what? There were a lot of good guys in that group – and gals," Mr. Romney said at a Thursday rally in Florida. "When I become president, I'm going to meet regularly with Democrat leaders and Republican leaders, talk about our challenges, look for common ground."

Those who think Mr. Romney could succeed where Mr. Obama has failed believe Republicans in the House of Representatives would ultimately fall in line behind a GOP president. Democrats in the Senate, meanwhile, would be eager to sign on to a big budget deal that enhances their own re-election chances.

But others doubt Mr. Romney's grip on his party is solid enough to steer a Republican-led House toward compromise.

"He does not command the same kind of loyalty in his party as Ronald Reagan did," insists Linda Fowler, a professor of government at Dartmouth College in Hanover, N.H. "That means that Romney would start off with a legislative defeat right off the bat."

Still, that there is any talk at this late stage of a President Romney – given his fitful campaign and more gifted competitor – means that, in a way, Mitt has already won. 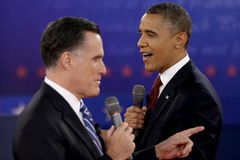