Bernie Sanders is hitting the campaign trail this weekend in an attempt to keep his young, progressive supporters from inadvertently helping elect Donald Trump as president of the United States.

Polls show a tightening race, partly because of millennials' lack of enthusiasm for Hillary Clinton. It may have been illustrated unintentionally on Friday by university students who greeted Michelle Obama at a campaign rally with chants of, "Four more years!"

That enthusiasm gap threatens Clinton's chances in key swing states. Sanders is stumping in two of them: Pennsylvania and Ohio. He's urging supporters to back his former primary rival instead of staying home or supporting a third-party candidate.

"I think that before you cast a protest vote — because either Clinton or Trump will become president — think hard about it," Sanders told MSNBC's, "Morning Joe," show on Friday.

"This is the presidency of the United States. And I would say to those people out there thinking of the protest vote, 'Think about what the country looks like, and whether you're comfortable with four years of a Trump presidency'."

His involvement in the campaign comes two months after he appeared with Clinton at a rally to offer his endorsement — and one month after groups of his supporters heckled Clinton at the Democratic convention.

But Sanders said his supporters should realize that on issues that matter, Clinton's platform is far closer to his. He compared Trump's tax policies that would transfer wealth toward the rich with her plan to eliminate tuition at public college: "You know what? ... That (tuition plan is) pretty good. That is pretty damn good."

A couple of polls this week have illustrated Clinton's ongoing challenge with millennials.

One by Quinnipiac shows her beating Trump by a mere five percentage points with voters under age 35 in a four-way race. Such a margin could prove disastrous to a Democratic candidate.

Consider the margin in the last election: President Barack Obama beat his Republican rival by 24 percentage points among voters under 30. According to Quinnipiac, young respondents favoured Clinton at a rate of 31 per cent; Trump at 26 per cent; Libertarian Gary Johnson at a whopping 29 per cent; and Green party candidate Jill Stein at 15 per cent.

A third-party group says it will spend millions on digital ads warning young people that a vote for anyone but her is a vote for Trump.

It's something Al Gore could attest to. A New York Times report says the former nominee could also enter the campaign, to remind a younger generation of the consequences a few Green party votes may have had in 2000: eight years of George W. Bush and a disastrous war in Iraq.

Gore lost the presidency by just 537 votes in Florida. Meanwhile, the Green party's Ralph Nader won 97,488 votes in that state. Many Democrats blame Nader for that defeat, which Green supporters resent.

Many Sanders supporters have said in interviews that they could vote Green. At one of the final rallies of the Sanders campaign, in California, Kate Tanaka said she'd always voted Green and would do so again if he wasn't on the ballot.

Yet some also said they're thinking strategically.

Tanaka said some voters like her might act differently if they live in a crucial state. That's not the case in California, where Democrats tend to win easily. "It's not a real gun-to-the-head situation (here in California)," Tanaka said.

Mary Andriotakis offered a similar view. At a rally outside the Democratic convention, the Sanders supporter says she could afford a protest vote because she lives in solidly Democratic Massachusetts.

If she lived in Ohio, she said: "Things might be different. I'd have to make some hard choices."

Sanders had events scheduled in Ohio on Saturday, after a stop in Pennsylvania on Friday evening. 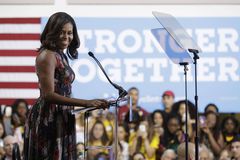