U.S. Secretary of Defence James Mattis broke bread with his Canadian counterpart at the Pentagon on Monday, as President Donald Trump warned that countries in the North Atlantic Treaty Organization must "pay their fair share" of the alliance's costs.

The tête-à-tête between Defence Minister Harjit Sajjan and Mr. Mattis – the first in-person meeting between members of the Trump and Trudeau cabinets – took place mere hours after Mr. Trump told American troops that he would make his country's allies pony up more to cover defence costs.

Canada currently spends about 1 per cent of GDP on defence, half of what NATO asks for.

"It's been very unfair to us. We strongly support NATO, we only ask that all of the NATO members make their full and proper financial contributions to the NATO alliance, which many of them have not been doing," Mr. Trump said at MacDill Air Force Base in Tampa, Fla. "Many of them have not even been close. And they have to do that."

Despite this tension, Mr. Mattis and Mr. Sajjan put on a chummy show for the cameras as they greeted each other in a white-walled, blue-carpeted meeting room on the third floor of the Pentagon.

Mr. Mattis, a retired four-star general who led U.S. troops in Afghanistan and Iraq, praised Mr. Sajjan's service as an intelligence officer in Afghanistan. Then he cracked a joke about "don't ask, don't tell," the U.S. military's former policy that banned gays and lesbians from serving openly.

"The Princess Patricia's Light Infantry were the first troops that came in to reinforce us at Kandahar, and they were a welcome sight," he said. "There was 'don't ask, don't tell' in those days, but I was hugging and kissing every one of your guys coming out of the plane."

Mr. Sajjan responded that Canada and the United States have a "relationship forged on the battlefield together."

The pair, each with a six-person entourage, sat on opposite sides of a conference table for a 45-minute formal meeting, followed by dinner.

Mr. Sajjan refused to answer questions about the meeting.

In a written statement issued by his office, the minister dodged the matter of Canada's NATO spending, saying only that he discussed Canada's willingness to lead troops in Eastern Europe. The alliance has been building up its presence in Ukraine and the surrounding countries in the face of Russian President Vladimir Putin's expansionist designs in the region.

"Secretary Mattis and I … discussed multilateral issues, including our pledges to lead battle groups in support of NATO's enhanced forward presence in Eastern Europe," the statement read.

His spokeswoman played down the question of NATO spending. In an e-mail, Jordan Owens wrote there was "a brief discussion about defence investments and the need to continue to invest" at the meeting.

Mr. Sajjan's statement said the two also discussed Canada's training missions in Ukraine and Iraq, and that Mr. Sajjan emphasized the importance of NORAD, the bilateral system for protecting the continent's airspace.

The statement also avoided any reference to Canada's long-deferred decision on sending peacekeepers to Mali. Ottawa committed last summer to deploy 600 more peacekeepers around the world, and the United Nations has signalled it would like Canada to send troops to Mali, where more than 100 peacekeepers have been killed since 2013 trying to contain an Islamist insurgency.

But Canada has refused to make a decision, choosing to wait until Mr. Sajjan can find out what the new administration in Washington wants of Canada militarily.

Sources told The Canadian Press last week that, because of Ottawa's vacillation, Canada lost its chance to command the Mali mission.

Ms. Owens said Monday the decision on peacekeeping deployments would be made by the entire government, not solely Mr. Sajjan, but confirmed Canada wants to know more about the U.S. plans before making a decision. It was unclear whether this decision was any closer to being made as a result of Monday's meeting.

She said the tone of the meeting was "positive," and Mr. Mattis's staff even brought out a cake at the end to celebrate Canada's 150th birthday. 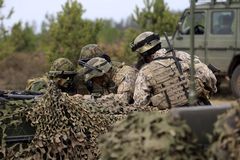 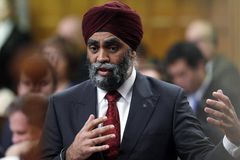