A conservative website with strong ties to the Republican establishment triggered the investigation into Donald Trump's past that ultimately produced the dossier that alleged a compromised relationship between the president and the Kremlin.

The Washington Free Beacon on Friday confirmed it originally retained the political research firm Fusion GPS to scour then-candidate Trump's background for negative information, a common practice known as "opposition research" in politics. Leaders from the Free Beacon, which is funded largely by Republican billionaire Paul Singer, insisted none of the early material it collected appeared in the dossier released later in the year detailing explosive allegations, many uncorroborated, about Trump compiled by a former British spy.

"During the 2016 election cycle we retained Fusion GPS to provide research on multiple candidates in the Republican presidential primary, just as we retained other firms to assist in our research into Hillary Clinton," wrote the site's editor-in-chief, Matthew Continetti, and chairman Michael Goldfarb. They continued: "The Free Beacon had no knowledge of or connection to the Steele dossier, did not pay for the dossier, and never had contact with, knowledge of, or provided payment for any work performed by Christopher Steele."

Earlier in the week, reports revealed that the Clinton campaign and the Democratic National Committee continued funding Fusion's work after the original GOP source lost interest.

Trump this week called it a "disgrace" that Democrats had helped pay for research that produced the document. But the original source of the research remained a secret.

The president himself hinted that he knew the Republican source earlier in the week, but he refused to share it. The White House had no immediate comment Friday night about the Free Beacon's involvement.

The Washington Free Beacon was initially founded as a project of the conservative non-profit group Center for American Freedom, as an alternative to liberal news sites run by progressive nonprofits. The Center for American Freedom was organized as a 501(c)4 and did not reveal its donors, but Singer was the sole funder of the site as recently as 2014, according to a Republican political veteran familiar with the site. The veteran spoke on condition of anonymity to detail the newspaper's financial background.

The Free Beacon first retained Fusion to investigate Trump in the fall of 2015 and ended its relationship after Trump secured the Republican presidential nomination in late spring of 2016, according to a person close to Goldfarb, who spoke on the condition of anonymity to share private discussions.

The website and its leaders have strong ties throughout the Republican establishment. Goldfarb was deputy communications director on John McCain's presidential campaign. Singer was backing Florida Sen. Marco Rubio's presidential bid at the time of the Free Beacon's involvement. And one of Singer's closest associates, Republican operative Dan Senor, served as Speaker Ryan's chief adviser during the 2012 president campaign.

A representative to Singer did not immediately respond to a request for comment.

Rubio denied any knowledge of the Fusion research or the dossier this week.

"As far as whether it was my campaign, it wasn't and I'll tell you why," he told CNN. "I was running for president. I was trying to win. If I had anything against Donald Trump that was relevant and credible and politically damaging, I would've used it. I didn't have it."

The document, compiled by former British spy Christopher Steele, emerged this year as a political flashpoint in the broader debate over Trump's ties to Russia.

A person close to Singer said the billionaire was not aware of Steele's involvement or the dossier until earlier this year when it was published. The person was not authorized to share internal discussions.

Law enforcement officials have worked to corroborate the dossier's claims. James Comey, FBI director at the time, advised Trump about the existence of the allegations, and Steele has been questioned as part of an ongoing probe into possible co-ordination between Russia and the Trump camp.

The U.S. intelligence community has determined that Russia meddled in the 2016 U.S. election. Special counsel Robert Mueller is investigating the Russian interference and whether it was tied to Trump's campaign.

"The Beacon has agreed to co-operate with the House Intelligence Committee to help the Committee verify this assertion," Langer said. 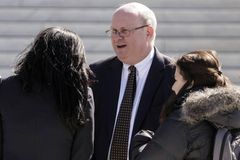 Committee still probing possible Trump campaign collusion with Russia: Burr
October 4, 2017
Report an error
Due to technical reasons, we have temporarily removed commenting from our articles. We hope to have this fixed soon. Thank you for your patience. If you are looking to give feedback on our new site, please send it along to feedback@globeandmail.com. If you want to write a letter to the editor, please forward to letters@globeandmail.com.
Comments