Even in regions of the country most hostile to his message, you could find Donald Trump's followers. And in their words, and in their appearance, you could discern his path to victory.

Yes, California turned its back on the most polarizing political figure of the modern era, as it was expected to. But inside the country's most populous state there were pockets of support for Mr. Trump, and the people proudly proclaiming their allegiance to him looked nothing like the poor, angry and disenfranchised rednecks to whom many are crediting his unlikely triumph.

"You know, I think it's just time to shake things up in Washington," Diane Pearson, 49, told me shortly after marking her ballot for Mr. Trump in this heavily Democratic and affluent L.A.-area beach town.

"And to be honest, we're allowing too many immigrants in. It's getting way too overcrowded in this country and in this state in particular. It's crazy what's happening. I think Trump might fix that. And a lot of our friends feel the same way."

Ms. Pearson was extremely pleasant, impeccably coiffed and dressed, and had two young girls sitting in the back seat of her Porsche Cayenne. She appeared very much like someone who was economically advantaged, who was, in fact, part of the country's elite that Mr. Trump broadly railed against in the course of his stunningly successful populist undertaking.

But the rich, the privileged, were part of his winning coalition. So were women. So were the college educated. The young. So were blacks. More Hispanics voted for Mr. Trump than they did for his party in the last election. And this after he suggested Mexico was sending the United States its rapists and drug dealers, thus justifying his screwball idea of building a wall between the two countries.

It wasn't just "hillbillies" and "unemployed plant workers" in small town America who elected Donald Trump Tuesday night. It wasn't just the people who showed up at his rallies to scream "Lock Her Up" or "Trump that Bitch." These people became easy caricatures of the Trump supporter. But that was so wrong. People of all races, of both genders, of all socio-economic and educational attainment stratums, had a hand in this momentous event and that is perhaps the most unsettling aspect of it all.

That America is deeply divided today is stating the obvious. What is disturbing is that the nativism that Mr. Trump symbolized, even championed, runs far deeper in the United States than anyone wants to admit. There are many Americans who share his common view, people who don't like the colour their country is turning, who lament their dwindling demographic presence and influence on the American landscape.

Blue-collar America found no problem, no inherent contradiction, in voting for someone who until this election was the very symbol of excess and greed, as firmly entrenched a member of the billionaires and trophy-wife club as you will find, and making him their champion. It is mind-boggling.

Now they will discover what their hubris has wrought. Maybe they feel they had nothing to lose.

We will now get to see how Mr. Trump plans to solve all that ails his country. And in that regard, California is a microcosm of those many challenges: high debt, deadly crime, climate change, unemployment, crumbling infrastructure and on it goes. We will see how he intends to bring back all those manufacturing jobs to the Midwest, without dramatically increasing the costs of products sold in the United States. We will see how he reacts when he gets his first Ferguson to deal with or a mass shooting that involves someone with a Muslim-sounding name. Or when there is some wretched international incident and the world's eyes turn to the U.S. for guidance.

We are going to see how this reality-TV star with the attention span of a mosquito handles these unimaginable pressures.

I felt badly for Hillary Clinton as I watched her give her concession speech Wednesday morning. She was an imperfect candidate to be sure, but a better one. I suspect she feels horrible about her part in allowing this con and buffoon take power, with all the corollary dangers that entails. I feel badly that she is also likely wondering why so many in the nation disliked her so much they allowed this to happen.

Tens of millions of Americans got drunk Tuesday night and decided to get a tattoo that said "Make America Great Again." I suspect, no, I know, they are going to wake up one day filled with regret, wondering what the hell they did. 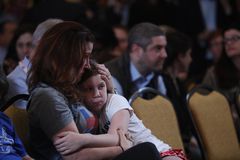