Foreign ministers of the 28-member European Union have scheduled a special meeting to assess the implications of Donald Trump's victory as America's allies brace for the unknown.

World leaders are walking a fine line as they react to Tuesday's vote in the United States, congratulating the new president-elect while signalling concern about the billionaire outsider's rhetoric and policies.

German Foreign Minister Frank-Walter Steinmeier – who proposed the Sunday meeting of foreign ministers – made no effort to disguise his disappointment.

"The result is different to what most people in Germany had hoped to see, but of course we accept it," he told reporters Wednesday.

"It is good that the election is over, because the way it was conducted has left deep scars. It will not be easy to heal them," he said. "If Donald Trump really wants to be president for all Americans, as he said this morning, then his first task will be to fill in the deep rifts that developed in U.S. society during the election campaign."

Mr. Steinmeier then noted the criticism that Mr. Trump expressed toward Europe and Germany during the campaign.

The election results likely dash the EU's hope of concluding a free-trade deal with the United States and are already bolstering opposition parties within Europe who have adopted similar nationalist political messaging to Mr. Trump.

Since the economic crisis of 2009, global powers have worked through groupings such as the G20 and the Trans-Pacific Partnership to push for deeper integration and freer trade in goods and services. Britain's June vote to leave the EU marked a break with that direction, driven in part by working-class concerns over jobs, immigration and the flood of refugees entering Europe.

Once the results were clear, Mr. Trump stressed the importance of uniting Americans as he addressed his supporters early Wednesday morning in New York.

"I pledge to every citizen of our land that I will be president for all Americans, and this is so important to me," he said, describing his movement of support as one that includes "Americans from all races, religions, backgrounds and beliefs who want and expect our government to serve the people."

Mr. Trump's speech included just a few lines aimed at the rest of the world, but he promised the U.S. under his leadership will seek co-operation in the global community.

"Canada has no closer friend, partner and ally than the United States. We look forward to working very closely with president-elect Trump, his administration and with the United States Congress in the years ahead, including on issues such as trade, investment, and international peace and security," Mr. Trudeau said.

"The relationship between our two countries serves as a model for the world. Our shared values, deep cultural ties and strong integrated economies will continue to provide the basis for advancing our strong and prosperous partnership."

Russian President Vladimir Putin, who was praised by Mr. Trump during the election campaign and was accused by Democrats of interference, called for improved relations between the two countries.

"We understand that the way to that would be difficult, taking into account the current state of degradation in the relations between the U.S. and Russia," Mr. Putin said as he read a prepared statement in the Kremlin.

"And as I have repeatedly said, it's not our fault that Russian-American relations are in that poor state. But Russia is ready and wants to restore fully fledged relations with the U.S."

Snapshots from the new Trump world: Reaction from around the globe
November 9, 2016 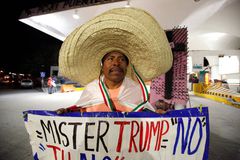 In Donald Trump, Americans voted in a new world order
November 9, 2016
Clinton strives to buoy devastated supporters with concession speech
November 9, 2016
Trump’s full speech: ‘I will be president for all Americans’
November 9, 2016
Follow Bill Curry on Twitter @curryb
Report an error Editorial code of conduct
Due to technical reasons, we have temporarily removed commenting from our articles. We hope to have this fixed soon. Thank you for your patience. If you are looking to give feedback on our new site, please send it along to feedback@globeandmail.com. If you want to write a letter to the editor, please forward to letters@globeandmail.com.
Comments