A brief foreign tour is usually supposed to help U.S. presidential candidates bolster their foreign-policy credentials and show off their diplomatic skills.

But then there's Mitt Romney.

The presumed Republican candidate arrived in London Wednesday on the first stop of a three-country tour. His plan was simple: Make a round of high-profile visits, including meeting British Prime Minister David Cameron, raise some money at a fundraising dinner, and attend Friday's opening ceremonies of the 2012 Olympic Games.

But instead of some glad-handing photo ops and pleasantries with politicians, Mr. Romney spent his first full day in London backtracking.

It started with an interview on NBC television Wednesday night in which Mr. Romney questioned the city's preparedness for the Games. "It's hard to know just how well it will turn out. There are a few things that were disconcerting," he said. "The stories about the private security firm not having enough people, the supposed strike of the immigration and customs officials – that obviously is not something which is encouraging."

Mr. Romney should have been on safe ground. After all, he led the organization of the 2002 Winter Olympics in Salt Lake City, something he has touted repeatedly in his campaign, and London has admittedly had plenty of problems organizing the Games, including the inability of security firm G4S to provide enough guards. But Mr. Romney's comments were seen as insensitive by Londoners and by Thursday morning, Mr. Cameron was firing back.

During a visit to the Olympic Park, Mr. Cameron made a point of standing near some of the venues and telling reporters, "This is a time of economic difficulty for the U.K. but look at what we are capable of achieving as a nation. Even at a difficult economic time, look at this park that has been built from scratch in seven years." Then he added, pointedly: "We are holding an Olympic Games in one of the busiest, most active, bustling cities anywhere in the world. Of course it's easier if you hold an Olympic Games in the middle of nowhere."

By the time the two men met later in the afternoon, Mr. Romney had changed his tune. He remarked at length about the challenges of organizing the Games and said even he made mistakes in 2002.

"I'm very delighted with the prospects of a highly successful Olympic Games," he added. "What I've seen shows imagination and forethought and a lot of organization and I expect the Games will be highly successful."

The about-face wasn't Mr. Romney's only mishap during the day. While visiting Labour Leader Ed Miliband, Mr. Romney referred to him as "Mr. Leader" at one point, provoking snickers from British journalists and drawing more attention to the already problem-plagued day.

And his fundraising dinner at a pricey London hotel Thursday night didn't escape embarrassment either. The event was supposed to be co-hosted by Robert Diamond, but he bowed out after abruptly resigning recently as chief executive of Barclays over allegations the British bank played a role in manipulating a key global interest rate in order to boost profits. Tickets for the fundraiser, at the five-star Mandarin Oriental hotel, cost up to $75,000.

At least Mr. Romney has something to cheer for at the Olympics. His wife, Ann, is part-owner of a horse that is competing for the United States in dressage on Aug. 2. The horse, Rafalca, is ridden by Jan Ebeling, whose wife, Amy, is also a co-owner.

"It is an amazing year already with my husband headed to the Olympics," Ms. Ebeling recently told Dressage Daily. "And if my dear friend Ann Romney makes it to the White House, I will be the happiest person on the planet."

The Romneys took time out Thursday to visit the site of the equestrian competition in Greenwich. Ms. Romney is also slated to visit the home of her grandfather in Wales.

While President Barack Obama won't be in London, his wife, Michelle, will be here to attend the opening ceremonies. Both will be holding photo ops with American athletes, Ms. Obama in the morning and Mr. Romney in the afternoon. Mr. Romney then leaves for Israel and Poland. 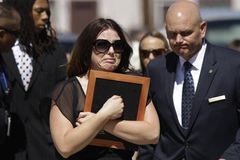 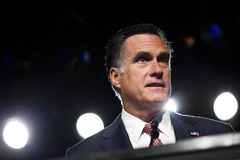