The politically ascendant anti-abortion movement gathered Friday for a triumphant rally on the National Mall, rejoicing at the end of an eight-year presidency that participants said was dismissive of their views.

Vice-President Mike Pence told the crowd at the March for Life that anti-abortion policies were a top priority of the new administration, and President Donald Trump tweeted that the rally had his "full support."

The March for Life is held every year in Washington to mark the anniversary of the 1973 Supreme Court decision legalizing abortion. While no official crowd estimates were available, the turnout was clearly larger than in recent years, when abortion opponents had less political clout. Many thousands huddled in the shadow of the Washington Monument and stood in long lines outside security checkpoints made necessary by Pence's appearance.

"We've come to a historic moment in the cause for life," said Pence, the first vice-president to address the rally. "Life is winning in America."

Pence said ending taxpayer-funded abortion and choosing a Supreme Court justice in the mould of the late Antonin Scalia — a conservative Catholic who opposed abortion — are among the administration's most important goals.

One of Trump's first acts after taking office a week ago was to sign an executive order banning U.S. aid to foreign groups that provide abortions. Pence said more such actions would follow.

A budget provision known as the Hyde Amendment already bans federal funding for Medicaid coverage of most abortions. Conservatives would like to see the rule made into a permanent law.

Majority Republicans in the House and Senate would also like to end federal funding for Planned Parenthood, which provided more than a third of the nation's abortions in 2014. They also hope to ban most abortions after 20 weeks of pregnancy. Trump has pledged to sign both measures if they reach his desk.

Many people at the march said they were encouraged by the early days of the Trump administration, even if they did not support him initially or disagreed with him on other issues.

Trump "was elected because of people who did not have a voice before. This past administration did not listen to us and did not even care," said Glenn Miller, 60, a cabinet maker from Coventry, Connecticut, who was attending the march for the fourth time. "I wouldn't say that I was a supporter of Donald Trump. I voted for him because I didn't think I had a choice."

Other participants said they felt the march was important this year because their voices were not represented at last week's Women's March on Washington, an anti-Trump demonstration that drew massive crowds in Washington and cities around the country. The women's march included support for abortion rights in its mission statement and dropped an anti-abortion group as a partner.

Joi Hulecki, 63, a nurse practitioner from Orlando, Florida, said abortion-rights supporters wrongly portray the decision to terminate a pregnancy as empowering for women, when in fact women often feel pressured to have abortions and regret it later.

"We don't want to judge them. We want to help them," she said. "We consider ourselves pro-women too."

The annual event was never expected to attract a crowd on the scale of the women's march, which brought more than half a million people to Washington. Organizers said in their permit application that they expected 50,000 people, though they hoped for more.

"There's been a lot of talk about numbers this past week," said Jeanne Mancini, president of the March for Life. "It's hard to add up so many numbers after 44 years because there have been a lot of us."

Mancini added that the most important number for marchers was 58 million, an estimate for the number of abortions performed in the United States since 1973.

Americans remain deeply divided on abortion. The latest Gallup survey, released last spring, found that 47 per cent of Americans described themselves as pro-abortion rights and 46 per cent as anti-abortion. It also found that 79 per cent believed abortion should be legal in either some or all circumstances.

The March for Life, however, is running ads arguing that a majority of Americans support some restrictions on abortion and don't believe it should be funded by tax dollars.

Kellyanne Conway, a senior adviser to Trump, also addressed the rally and assured the crowd that Trump and Pence were on their side.

"Their decisive actions as president and vice-president will further this cause," she said.

U.S. House passes bill to bar federal funds for abortion
January 24, 2017
Hats off to the women: A look at the knitted pink headpieces that helped make protest history
January 21, 2017 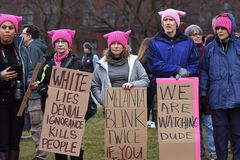