In 2012, there was no doubt who Ohio's African-American community, especially those people in the Cleveland area, were voting for – Barack Obama. They said it wasn't just because he was black, but because they always voted Democrat. Republicans, they said, had a different agenda that omitted or went against African-American interests.

I rode into Cleveland this week thinking that notion probably hadn't changed. Perhaps some African-Americans wouldn't be as enthusiastic about supporting Hillary Clinton – some might even decide not to vote, and that might cause concern – but I never imagined significant numbers of African-Americans in Cleveland might actually turn to Donald Trump.

President Obama spoke of this disaffection recently. Addressing African-Americans, he said he would be personally "insulted" if they did not support Ms. Clinton, who would carry out Mr. Obama's policies – in particular, the Affordable Care Act, known as Obamacare. So, I was intrigued to learn that Mr. Trump would participate Wednesday in an unusual meeting with a large, statewide assembly of African-American and other evangelical pastors at the church of one of the largest African-American congregations in the Cleveland area.

The New Spirit Revival Center is located in a handsome former synagogue built in 1925 whose Jewish congregation relocated to the suburbs. Its main hall and balcony were filled with some 1,300 cheering people of faith when Mr. Trump and his running mate, Mike Pence, Governor of Indiana, took centre stage.

Rev. Darrell Scott, founder of the revival church a decade ago, said he had decided six years ago to support Mr. Trump if he ever ran for the White House, and was disappointed he didn't run in 2012. He denounced liberal media for describing the Republican candidate as a "racist," saying he found him to be "humble, and respectful of clergy."

"If elected, he will protect and defend Christianity," Dr. Scott told the enthusiastic audience.

Deandra Smith, an African-American member of the congregation, sat with me throughout the event.

She explained that she had been a precinct captain for Mr. Obama in the 2008 election and worked across the county for him in 2012, but that now she is supporting Donald Trump.

"And I'm not alone," the mother of two grown children insisted. "Those who think African-Americans are committed to Hillary better think again."

"That is the problem," she cried out, much like a preacher on stage. "We don't like what turned out to be his policies."

"They are more about promoting the LGBTQ community than Christianity," Ms. Smith explained, her jewelled crucifix earrings glistening in the light.

"Health care?" she snorted. "For those of us who have made it to the middle class, it's a disaster. We can't afford the premiums."

"Syrian refugees?" she exclaimed, now on a roll. "Charity begins at home. Let's find homes for our own homeless people before bringing in others."

As for Hillary Clinton, Ms. Smith said she simply doesn't trust her.

"That birther story did come from her campaign in 2008," she insisted, referring to allegations that Mr. Obama had not been born in the United States. "She [Ms. Clinton] knew about the story being put out by her people and could have stopped it. But she didn't.

"I vowed then," Ms. Smith said, "I could never support her."

Don King, the 85-year-old former fight promoter who was born in Cleveland, introduced Mr. Trump to this, the promoter's hometown.

Some 44 years ago, Mr. King said, he had brought Muhammed Ali to Cleveland to help save a hospital that was serving the black community. "Today," he said, "I bring you a man, Donald Trump, to save a nation."

Mr. King hailed Mr. Trump as a "gladiator" and the only politician in the United States committed to creating "a whole new system," in which African-Americans are valued as much as whites.

In a Fox program that followed, Mr. Trump revealed that he supported "stop-and-frisk" policing in troubled inner cities as a way to end violence in black communities.

The stop-and-frisk practice, criticized as an intrusion on civil liberties and stereotyping, is akin to the controversial practice of "carding" in some Canadian cities.

"I would do stop-and-frisk. I think you have to," Mr. Trump said during the recording of the Fox program, responding to an audience member's question about stopping "black-on-black" crime. "We did it in New York, it worked incredibly well."

That is a view shared by former New York mayor Michael Bloomberg and former New York police chiefs, but statistics show that New York's drop in violent crime also coincided with similar drops in several other cities that did not employ this invasive practice.

The proposal will certainly have its critics, but even African-American members of the meeting and the audience Wednesday mostly cheered the notion.

"You have to do something like this," Ms. Smith said. "Life for many of us has become too dangerous." To be fair, when asked a similar question by a pastor in his earlier session, Mr. Trump first said he would bring jobs to the people in the inner cities, rebuild vital infrastructure and restore pride to communities. He only added that stop-and-frisk should be employed in high-crime areas.

He also gave the pastors a sensitive assessment of recent shootings of African Americans by police in Charlotte, N.C., and Tulsa, Okla. In Tulsa, he said, the man who was shot "appeared to do everything he was supposed to do. He looked like a good man."

"That young officer," he said about the policewoman who shot and killed the man, "I don't know what she was thinking … did she choke?" Mr. Trump said it was important to look at the makeup of police forces – perhaps some officers should not be in such a situation. Ms. Smith was very pleased with the day's events, but noted that there still will be tremendous pressure on the African-American community to support the Democrat, Hillary Clinton.

A prominent Baptist minister and Clinton supporter had said he would be watching to see just who attends the Trump meeting.

"They keep a list of people they can lean on," a livid Ms. Smith said. "We vote for who we want to," she said. "We are not bound to vote for one party because of the colour of our skin."

"That's a whole new type of racism, of slavery," she said.

Later on Wednesday, in an unexpected development, Louis Farrakhan, an African-American Muslim and leader of the Nation of Islam, told black voters in Washington that he prefers Donald Trump to Hillary Clinton, saying politicians such as her and Mr. Obama have failed black voters. 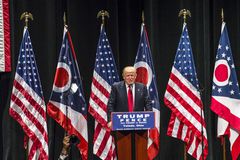 Trump vs. Clinton: What each can do to win the election
September 9, 2016 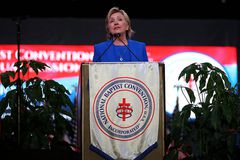