Alberta Premier Rachel Notley jetted to Washington Sunday for the latest foray in a full-court press by Canadian politicians to preserve the country's lucrative relationship with its largest trading partner.

Ms. Notley's three-day trip – the first for a provincial premier since President Donald Trump took office Jan. 20 – is aimed at building relationships with the new administration and shoring up support from members of Congress and business leaders ahead of Mr. Trump's promised renegotiation of the North American free-trade agreement.

It comes on the heels of visits by Prime Minister Justin Trudeau and his cabinet, and will overlap with a trip by federal Finance Minister Bill Morneau.

The stakes are particularly high for Alberta. The province exported $68-billion to the United States last year, depending on American demand for energy, food and forest products to drive more than three-quarters of Alberta's exports.

At a time when low oil prices have already taken a bite out of Alberta's bottom line, the province cannot afford to see any of its U.S. trade curtailed by Mr. Trump's promised protectionism.

"Alberta's trade with the U.S. creates jobs for millions of Albertans and Americans," Ms. Notley said in a statement.

"Strengthening this relationship will help grow the economy on both sides of the border, and this is a message we will communicate clearly to our neighbours as we work with them to sustain and expand our prosperous relationship."

An Alberta government official said Ms. Notley was already planning a jaunt to Washington when the federal government asked all provinces to help Ottawa build bridges with the Trump administration.

The Premier's intent is to make sure Alberta's interests are on the radar of Washington politicians as Mr. Trump pushes ahead with his plans to reopen NAFTA and overhaul U.S. trade relationships.

"It's early days for the administration. We don't really know what they're going to do – I don't think anyone does," said the official, who spoke on condition of anonymity.

"We want to be front and centre in decisions."

While Mr. Trump's instructions to the State Department to swiftly review and approve the Keystone XL pipeline will likely help Alberta's oil industry, other potential moves by the new President could spell economic trouble.

Any attempt to put tariffs on imports as part of a NAFTA renegotiation would hurt Alberta's exports, from gas to wheat. So would a border-adjustment tax, which has been proposed by members of Congress, which would disincentivize American companies from importing products.

And Mr. Trump has spoken about extracting payments from TransCanada Corp. in exchange for the right to build Keystone XL.

Scotty Greenwood, a senior adviser to the Canadian American Business Council in Washington, said Ms. Notley and Mr. Trudeau have adopted a smart strategy in proactively reminding the new U.S. administration how much the country benefits from its open market with Canada. Fully one-third of U.S. energy imports, for instance, come from Alberta.

"Canadian leaders are taking an all-hands-on-deck approach in reinforcing the importance of the relationship in the U.S.," she said in an interview.

"It's important for policy makers to understand the magnitude of the relationship and what's at stake."

The trouble for Canada, she said, is that many Americans simply don't know much about the current trade relationship – or how lucrative it is for both sides.

"There's a low level of awareness of Canada as an economic partner," she said. "There is a real need to get out there and pound the drum."

"I think it's important for [Ms. Notley] to impress on the new administration how much a number of states in the U.S. depend on trade with Alberta," Mr. Kobly said. "The message needs to go across that we are a valued trading partner, we're an ally, and any types of protectionism from the U.S. to Canada is probably going to hurt both partners."

With a report from Wendy Stueck in Vancouver

Itinerary of federal NDP leadership debates will skip Alberta
May 17, 2018 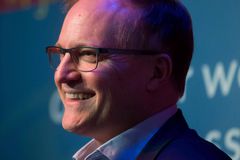 Alberta Premier Notley to discuss cross-border trade in Washington
April 14, 2017
Follow Adrian Morrow on Twitter @adrianmorrow
Report an error Editorial code of conduct
Due to technical reasons, we have temporarily removed commenting from our articles. We hope to have this fixed soon. Thank you for your patience. If you are looking to give feedback on our new site, please send it along to feedback@globeandmail.com. If you want to write a letter to the editor, please forward to letters@globeandmail.com.
Comments